2:51pm The Juan MacLean Happy House from The Future Will Come (DFA) Add to Collection 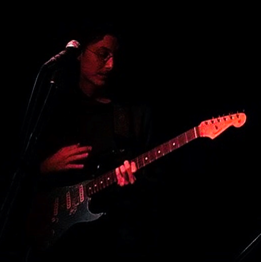 Elliot Gitter of Teleporter will perform solo at CHIRP Night at the Whistler on April 25. (Photo by Harley Friedman)

Elliot Gitter is the lead guitarist, vocalist and principal songwriter for Teleporter, who opens for ADT at CHIRP Night at the Whistler this Wednesday, April 25 at 8 pm.

Gitter will perform solo at the Whistler, focusing mostly on new material. We caught up with him to find out what he has in store for the Whistler audience.

Q : How long has Teleporter been together?

A: Nick and I started playing together with Jeremy in 2012 and recorded The Martian Chronicles in 2013 with engineer Barrett Guzaldo. At the time, I was living in a house in Chicago with several of my friends. I recorded the demos at my home studio, using an eight-track analog console. We would sample a bunch of sounds and create music.  After we completed the sessions, Barrett went on to create Treehouse Records with Matt Gieser.

Q: Was The Martian Chronicles based on Ray Bradbury’s masterpiece?

A: Absolutely. I was watching the TV series and began creating music with some of the voice samples, including Bradbury discussing the Martian society. The first six tracks are loosely based on The Martian Chronicles, but the other tracks were influenced by TV shows and movies that were watching at the time.

Q: What is your songwriting process?

A: The process is very organic. Back then, we were playing a lot of live shows and used those performances to fine-tune the songs, based on the audience’s response. By the time we started laying down the tracks in the studio, the songs were very polished, and we were able to complete the recording very quickly.

Q: Who is currently in the band?

A: The current line-up is still Nick on drums and me on guitars, synthesizers and vocals. AJ is our new bassist, and he has a very fluid and natural technique that complements our sound. This is the line-up we will use when we head into the studio to record our next album. 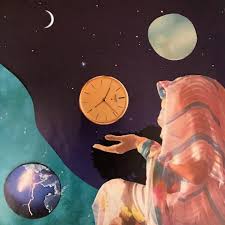 Q: The Martian Chronicles was a very sophisticated recording, mixing a variety of styles, from noise rock to pop to shoegaze, and of course, voice samples. Who are some of the bands that influenced your sound?

A: We don’t consciously try to sound like anyone other than ourselves, but we love music by Brian Wilson, Jim Sullivan, Sun Ra, Dirty Projectors, Can and the Beatles.

Q: What are you planning for CHIRP Night at the Whistler?

A: Since I am playing solo, I will focus mostly on new material that I am working on. I plan to play guitar, synthesizer and will use a sampler as a mixer. My set should last about 30 minutes and I will play a half-dozen songs.

Q: Can you describe some of these new songs?

A: The lyrics aren’t sci-fi based this time and I’ve taken much more of a hip-hop approach to writing these songs, focusing more on music samples and beats, rather than voice samples. Most of my songs begin with a drum beat. Once I get a groove in my head, I can usually create a song from that, which I record in my home studio. The Whistler show is one of my first solo performances, and I am looking forward to seeing how the audience reacts. It is important for us to be able to duplicate our studio sound live; that’s why we like to play and refine these songs live, rather than in the studio.

Teleporter and ADT will perform at CHIRP Night at the Whistler at 8 pm on Wednesday, April 25. Tickets are free, but you need to RSVP to this 21+ show.

You can listen to Mike Nikolich every Friday from noon to 3 pm on CHIRP - 107.1 FM

Next entry: The Fourth Wall: The Last Seduction