Welcome to The Fourth Wall, CHIRP's weekly e-conversation on cinema. This week's subject is the film The Last Seduction.

This edition is written by CHIRP Radio volunteers Kevin Fullam and Shawna Kaiser. 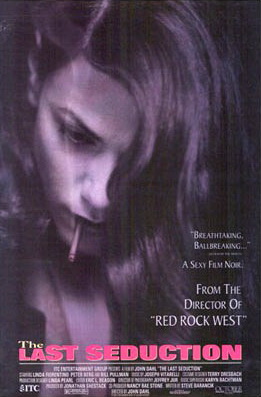 Hang on to your heart, your wallet, and your life -- if Bridget Gregory of The Last Seduction is in town, all three are at risk. Was it a victory for feminism to see a female cinema protagonist that was as ruthless as any male to grace the screen? Let's discuss...

In the annals of Neo-noir, The Last Seduction may have traveled one of the oddest paths to glory. First aired by HBO in 1994 before the channel garnered its current status as a purveyor of high-brow television, Seduction was originally pitched as a throwaway "skin-e-max" (in the words of screenwriter Steve Barancik) flick. Lo and behold, a quality piece of cinema emerged, powered by a stunning performance from lead Linda Fiorentino as the aforementioned Ms. Gregory. The film was then ushered into the box office for a brief run (grossing over $5 million) and garnered a four-star review from Roger Ebert, who listed the movie on his Top 10 list for the year. However, despite generating serious Oscar buzz, Fiorentino was ruled ineligible by the Academy because the film had aired on cable before arriving in theaters.

The plot in a nutshell: Bridget is married to Clay (Bill Pullman), a shady would-be doctor who's dealing drugs in order to pay back a loan shark. After a big score, the couple quarrel; Clay hits Bridget, and she decides to hightail out of NYC -- with their $700,000. Bridget bunkers down in a suburb of Buffalo until her divorce goes through, while Clay (now in serious physical danger from Mr. Loan Shark) hires private eye Harlan (Bill Nunn) to find his wife and recover the loot.

Fiorentino's Bridget, however, ain't no easy prey. She's tough, capable, and generally thinking three steps ahead of her adversaries. While on the lam, she seduces local good ol' boy Mike (Peter Berg), and nails down an executive position at the same insurance company that employs Mike (what are the odds?!). All under an alias, of course. Poor Mike is in wayyyy over his head, and continually laments that Bridget -- er, make that "Wendy" -- never wants to talk or spend time together outside the bedroom. Here, the rules of engagement are made clear from the very start; Bridget has one use for Mike, and if he ain't happy, she'll simply find someone else who will fill that need. Well, make that two uses, as she's hatched up a scheme to cover her tracks...

Revealing additional details wouldn't be sporting -- it's noir, after all! So let's pause here and shine the spotlight on Bridget. In your eyes, Shawna, was she a notable Sign O' The Times as far as popular culture? 1994 was also the same year Disclosure was released (with Demi Moore as an executive targeted by a reverse-sexual harassment suit), and just a short while after Kathleen Turner's V.I Warshawski made waves with Turner as a hard-boiled detective. (V.I. fizzled at the box office, but the title character was notable nonetheless.) What did you think about the gender role-reversal re: Bridget and Mike? And where did the film rank for you as far as Neo-noir in general?

Okay, can I first say, my initial knee-jerk reaction didn't give credit where it was due. It helps to remember the notable shift in female role-reversals during the early 1990s, with Jodie Foster's Clarice Starling in The Silence of the Lambs serving as a cultural milestone in my childhood. (Then again, Basic Instinct,anyone?)

In The Last Seduction, Fiorentino earned her place in noir history. Bridget leaves you wondering about her past, and whether she's really as cold as she seems -- but after re-visiting the film, I believed every word of her husband Clay: "She's not invested, cowboy." There's one key difference between her and some of the other female leads in the cinema thrillers of that era. Foster's Starling and Turner's Warshawski were characters developed over time via novels, which allowed us to better understand their tough exteriors. Disclosure, another literary adaptation, achieved box-office success ($214 million) that greatly contrasted with Ebert's two-star review, during which he said -- and I'll admit first appeared true in Seduction -- "(the film's) basically a launching pad for sex scenes." Nothing against Demi Moore, but I see Fiorentino's Bridget as a superior femme fatale.

The Academy said Fiorentino was ineligible because the film aired on cable before arriving in theaters? Whatever. Bridget has places to be and men to use. Instead, it's possible Seduction was entirely ahead of its time. I mean, she actually fondled his junk in the bar, two seconds after meeting him, then smelled her hand. Can I say that here? I had a pillow in front of my face...and it's 2018. All jokes aside, Fiorentino brings an intoxicating coolness uncommonly associated with women (again, early '90s) that can make people -- MEN -- uncomfortable. You want to like her, yet she's unpredictable in her callousness to cut. If we had 10 more Bridget Gregorys during this era, then #metoo would likely have happened a decade earlier. I would say she is more a Sign O' The Times in hindsight.

I have to ask, Kevin, what did you think of the music? I have to mention the main title by Joseph Vitarelli, which works so well with the film. It feels well-suited to an old jazzy walk to buy baguettes... perhaps one where Mike tries to convince Bridget not to murder bad husbands.

If we agree that Fiorentino helps flip the script and assumes a villainous role typically assigned to male characters, I'm curious -- from a man's point of view (and looking 20+ years in the rear-view mirror), do you find Bridget Gregory believable? Did you ever think she loved Mike? (Surprisingly, I did.)

I have to admit that the Vitarelli track didn't immediately jump out at me during my viewing? Though listening to it again, I can definitely see how it complements the Web of Deceit rather well. (And please, no talk of baguettes while I'm hungry.) The tune also reminded me a bit of the music in David Mamet's films -- Glengarry Glen Ross and The Spanish Prisoner in particular, both of which contained more than a little duplicity.

Was Bridget a believable character? Her Machiavellian plot thread completely lines up with her Establishing Character Moment, as we see her belittling her underlings as a successful, no-nonsense telemarketing manager during Seduction's opening minutes. But the biggest stretch for me was her marriage to Clay, who seemed to be a bit of a milquetoast fellow, shady dealings aside? You'd think that: A) Clay would know far better than to smack around a woman like Bridget; and B) she'd respond not by fleeing, but by gunning him down, a la Janice Soprano's murder of Richie Aprile in The Sopranos. (The similarities are striking here -- Janice is the ultimate Spitfire type and hardened by a life around crime, and doesn't take too kindly to being popped in the mouth.)

Did Bridget love Mike? My guess is that she didn't. Or at least not in the traditional sense -- perhaps she would as someone might love a pet? Is it possible to truly love someone who demands so little and is easily manipulated? And speaking of manipulation, what did you think of the thread involving Mike's aborted marriage to a transgendered woman? It provided a bit of key blackmail motivation, but also left me with many, many questions. Mike may be a gullible sort, but being hoodwinked that badly is a rather big stretch, even for him. Also, do you think, considering the evolving mores on sexuality, that this element would be presented a similar light today?

Silence of the Lambs was certainly a landmark film as far as strong female protagonists, and I'd be remiss if I didn't mention Aliens (1986), which is not only considered one of the best sci-fi/horror/action films of all time, but also shattered traditional gender norms via Sigourney Weaver's Ripley (along with Jeanette Goldstein's Vasquez) as a pioneering female take-charge, kick-ass heroine. Completely agreed on your take re: Bridget and #metoo -- though something tells me that Bridget wouldn't be one to take her stories to the press? I'd instead guess that anyone harassing her would likely see a sudden and significant decline in their health...

It sounds like a close call as to which of the three is the least redeemable character in the film! I'm so glad you brought up Mike's aborted marriage. After all, it's the catalyst that Bridget uses for her Last Seduction. Mike's ex-wife had a major impact despite minimal screen time -- she's the secret weapon that Bridget uses to manipulate Mike before she drives off into the sunset. Okay, I get it: Mike's a spineless dum-dum. But let's pause, and in the beauty of hindsight, examine how this film depicted the trans community at that time period.

Seduction did no service for the trans community by essentially humiliating Mike for being married to a transgender person. I don't think a film produced today would be well received if the same twist was used to seal the ending. It's interesting how collectively we view our present condition, reflect on the past, and envision the future. I'm reminded of those silly paintings commissioned for the Exposition Universelle (World's Fair) of 1900 in Paris that envisioned what the world might look like in the year 2000. Some of the ideas came to fruition -- but you also had ridiculous concepts such as firemen flying with batwings, or domesticated whales used for transportation.

An earlier, more positive depiction of sexuality and gender roles arrived in 1982's The World According to Garp where John Lithgow (in an Oscar-nominated performance) portrays transgender Roberta Muldoon. When taking on the character of Roberta, a former football player, Lithgow "just decided to underplay everything (and) make her a perfectly normal person - in fact, a person who is utterly unaffected." The character "feels more herself than she's ever been," Lithgow said, adding, "in that sense, it was revolutionary."

As for Ms. Bridget, what else can we say? Except that she's not played by Linda Fiorentino in The Last Seduction II. A sequel was released in 1999, as a new Bridget (Joan Severance) travels to Barcelona and continues her escapades -- targeting a businessman while a private investigator tracks her down. One reviewer advised viewers to "go to the dentist instead. It's more enjoyable." Guess Bridget should've quit while she was ahead.

Next entry: @CHIRPRadio (Week of April 30)