8:04am Gentle Sinners Waiting For Nothing from These Actions Cannot be Undone (Rock Action) Add to Collection 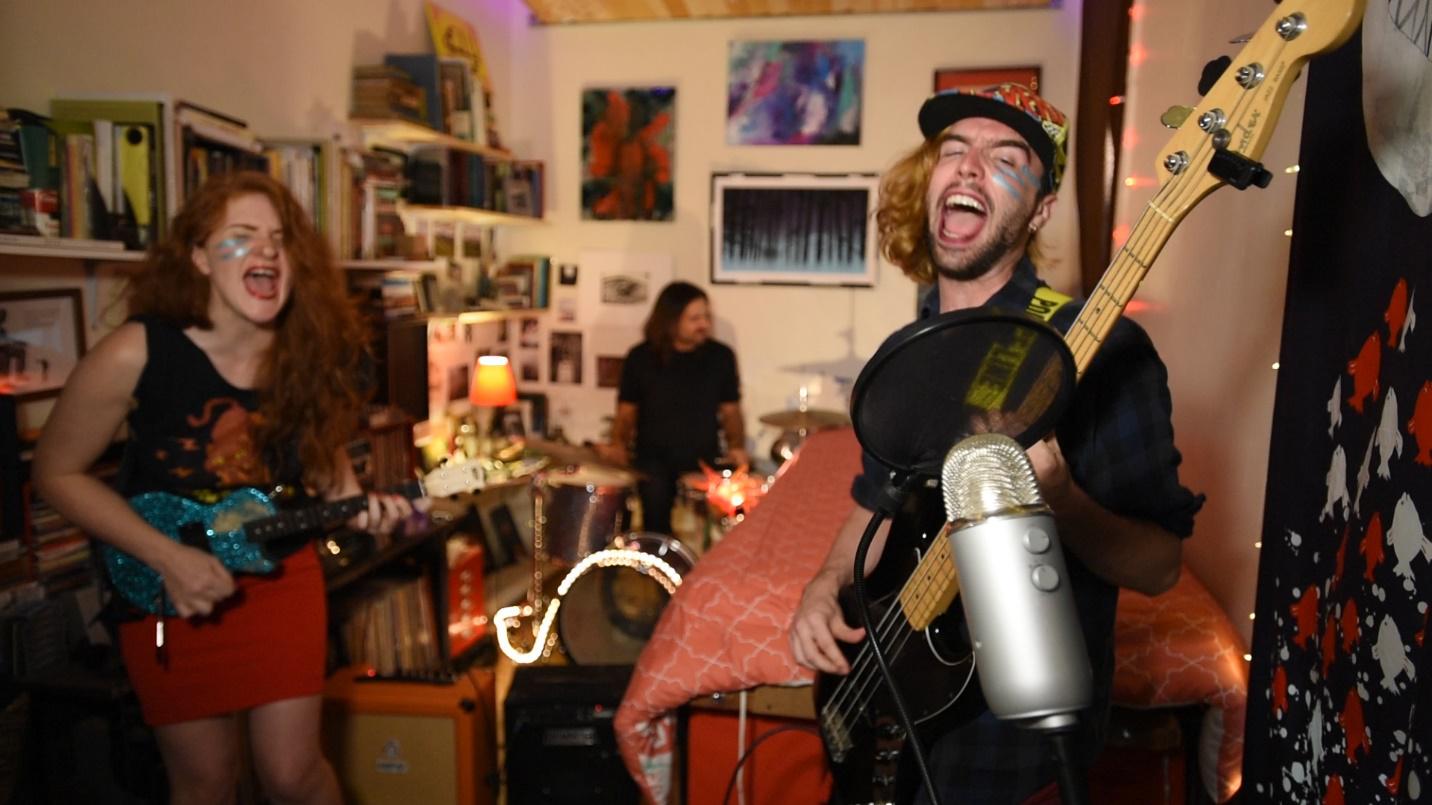 The band features Lau on electric ukulele and vocals, Fatt on bass and vocals, and Z on drums. Founders Lau and Fatt have been playing together for two years, after meeting at an open mic show at Galley Cabaret, which bills itself as Chicago’s best dive bar.

“When I met Lau, I was performing some songs that I wrote on a ukulele,” Fatt says. “The uke is a small and manageable instrument, and I started bringing it to open mic shows so I could get comfortable performing in front of people. Lau had this electric/acoustic ukulele and a bunch of foot pedals, and we started talking about working together.”

“One day, Fatt posted on Facebook that he wanted to hang out,” says Lau. “I messaged him, we grabbed burgers and started a band.”

Lau, who is a photographer/videographer by day, had painted her ukulele to look like a baby Zakk Wylde guitar. Wylde is the guitarist for Ozzy Osbourne and founder of the heavy metal band Black Label Society.

“Like Fatt, I made a hobby of playing at open mic nights, and I started adding effects pedals to experiment with the sound,” Lau says. “I had to retire the little gal because I was getting too much feedback from the hollow body. I replaced her with a custom-made, solid body ukulele with a humbucker.”

Fatt bought his first uke in high school and Lau started fiddling around with a friend’s ukulele eight years ago.

“Yeah, she sort of lent it to me permanently,” Lau says, with a wink.

The band plays a hybrid of punk, folk, surf rock, and alt-country, with a goal of pushing the sound as far as they can within the limitations of bass guitar, ukulele and drums. Their songs are short, often witty, with funny lyrics and plenty of hooks.

“I will come up with a stupid pun and write a song from it,” Fatt says, “or I will start with a melody and work from that.” 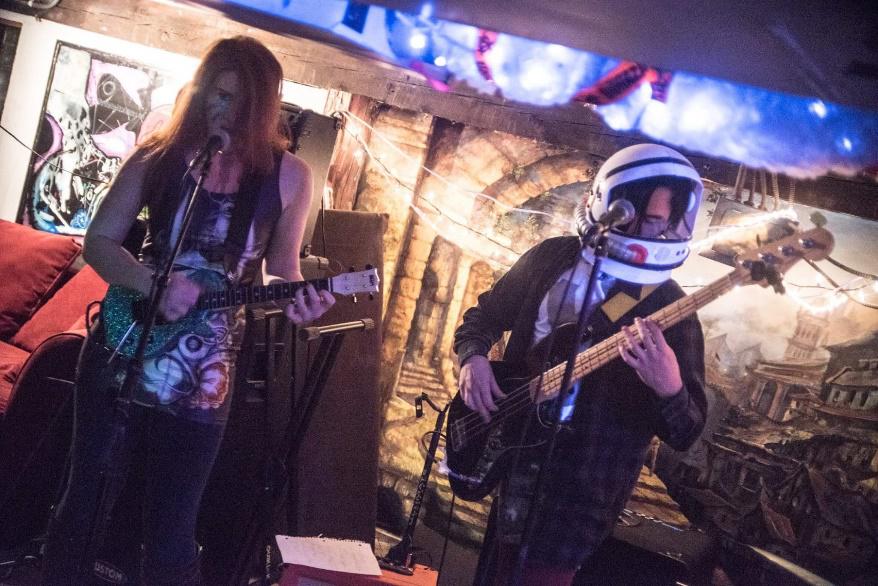 “For me, the songs often come from how I am feeling,” Lau says. “Sometimes I write the lyrics first, like with ‘Surf Bunny,’ and other times I write the music first. I keep a scrapbook of poems and lyrics that could be songs. A lot of my older songs fall more into the singer-songwriter mode, but when we come up with a Sparkletears song, where you can do anything you want, it’s just liberating and a lot of fun.”

“I worked at a Staples copy and print center in college and hated that job, as much as dealing with a boss who was right out of the movie Office Space. I got so irritated that I wrote ‘I’m Gonna Quit My Job’ and ‘Consumer Identity’ on the chance that someday I would be in a punk band.”

Both songs wound up on the SPARKLE SPARKLE EP, with Lau screaming, “I am what I consume. We are more than we consume” over and over on “Consumer Identity.” Fatt’s song, “Here,” also on the same EP, chronicles the gentrification of Logan Square. “I just got back from Hell. Better known as Logan Square…”

“The Well,” off Mystery Sparkle Theatre, is a short sonic blast that features lyrics lifted from an old nursery rhyme penned in 1898 by Harry Graham, writing under the pseudonym Col. C. Steamer.

“Graham wrote a series of Little Willie poems that are about death and the horrible things Little Willie did to other people, like pushing his sister down a well,” Lau says. “That one came together when we were recording our first demo. I had the couplet in my head since I was young, and the song came together in 30 seconds. We made that recording in one take.”

The garage classic, which lasts all of 34 seconds, features ukulele distortion feedback, a throbbing bass line and one memorable verse.

“A friend of mine jokes that it’s a Sparkletears song – why do you need a second verse?” Lau says. “We don’t feel the need to make a song longer than it needs to be.”

“Yeah, if you want the song to be longer, put it on repeat,” Fatt adds.

On “Forest Preserve,” the duo ventures into doo-wop turf, with Fatt providing the lead vocals and Lau the harmonies.

For the Whistler show, Sparkletears will dig deep into their catalog, which includes at least 25 unreleased original tracks, several of which will be unleashed upon the unsuspecting audience, just for kicks. The band also performs a killer version of Black Sabbath’s “War Pigs,” and some Portishead and Cake classics, although the covers don’t always make it to the live performances.
“Our usual set is 13 songs in 22 minutes,” Fatt says, “so we’ll perform songs that we haven’t recorded because we’ve been too busy playing live shows. We will vomit some of those gems on that little Whistler stage!”

Although most of the band’s songs were recorded with a drummer named Pete, the Whistler show features their new drummer, Z, who was featured on the new Surf Bunny/Horse Misogyny single, which received heavy airplay on CHIRP.

“It was my dream to write a surf song because I love the surf-punk scene,” Lau says. “But one thing about the surf scene is that you actually need to know how to surf to play in a legitimate surf band like (guitarist) Dick Dale, who surfed all day and played music all night. I always thought, ‘Gosh, I’d like to write a surf song, but I have no cred.’ So, Surf Bunny’s basically a song about not being a surfer.”

Sparkletears is headlining CHIRP Night at the Whistler with their pal, emerging Chicago hip-hop artist Malci this Wednesday, Sept. 26 around 8 pm. Tickets are free, but please RSVP to this 21+ show.

Mike Nikolich is a DJ at CHIRP Radio-107.1 FM. You can hear his show every Friday from noon to 3 p.m. Central Time.

Next entry: @CHIRPRadio (Week of October 1)