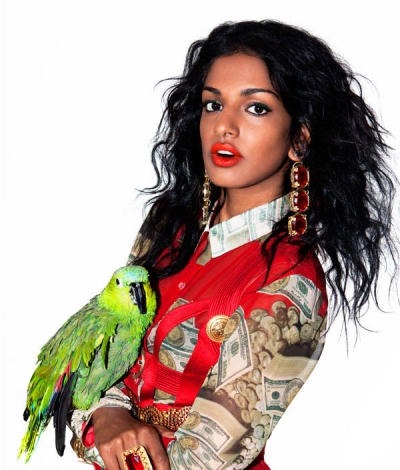 Today, one of more talked about recording artists of recent times, M.I.A., turns 39 years old. Mathangi Arulpragasm was born in London of Sri Lankan decent. Her family moved to Sri Lanka where, according to M.I.A., her father was part of the rebel Tamil Tigers insurgency. Life in Sri Lanka with a rebel father was unusual, with constant threats, and eventually, her family, minus her father, came back to London. She first pursued visual arts, and only in 2001, with encouragement of Peaches, did M.I.A. start making music. Using basic drum machines, she cut her first demo, and eventually met up with Diplo and releasing the Piracy Funds Terrorism mixtape, which introduced a larger audience to M.I.A.’s multi-cultural music with some hip-hop aspects and sloganeering lyrics. This was a precursor to the more polished debut album, Arular, named after her father. With songs like “Bucky Done Gun” and “Sunshowers”, she established herself as a major new artist. The follow up, Kala, founder her expanding her artistry further, but the divisive Maya album, with radically altered song structures, stalled her momentum, along with controversies surrounding her authenticity as a politically motivated artists and stupid Super Bowl hi-jinks. She regained some artistic footing with last year’s Matangi album, as she still stands as someone who is imitated. In honor of M.I.A., please grab your iPod or MP3 player, hit shuffle and share the first 10 songs that come up.

Next entry: CHIRP Goes to Kentucky: Forecastle Festival, Day One