Sarah A. writesCHIRP Goes to Kentucky: Forecastle Festival, Day One

CHIRP DJ and Volunteer Coordinator Sarah Avampato skipped out on Pitchfork this year in order to attend the Forecastle Festival in Louisville, KY. Founded in 2002, Forecastle continues to pick up buzz as a must-see festival, and combines music with art and activism, through its Forecastle Foundation wing.

This is my third year attending Forecastle, and while I don’t want to play the My Festival Is Better Than Your Festival game, I will say that this is the only festival that I trust enough to buy a ticket for before the lineup is released. While the music is, of course, the reason to attend any festival, there’s always plenty of other things to keep you entertained. 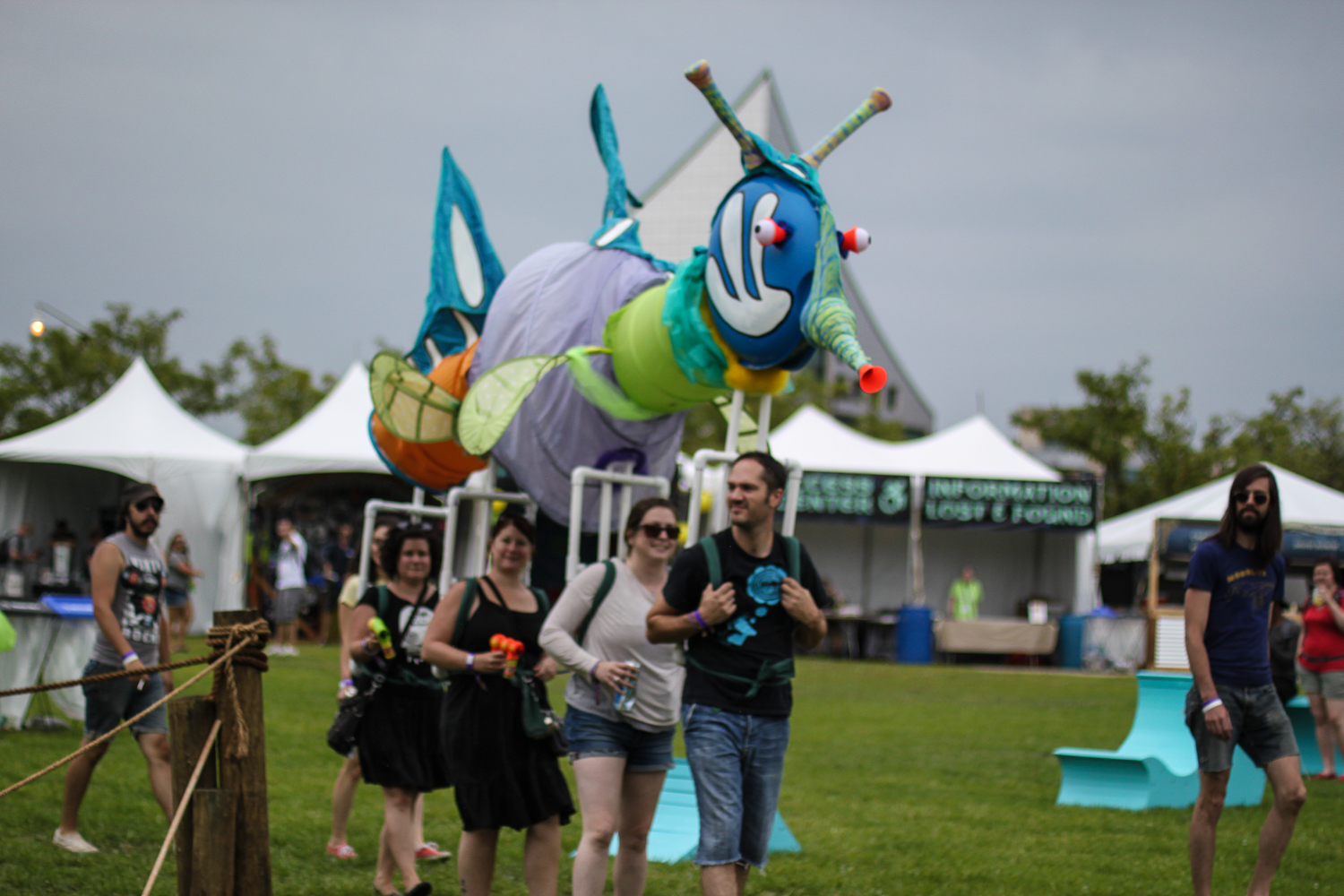 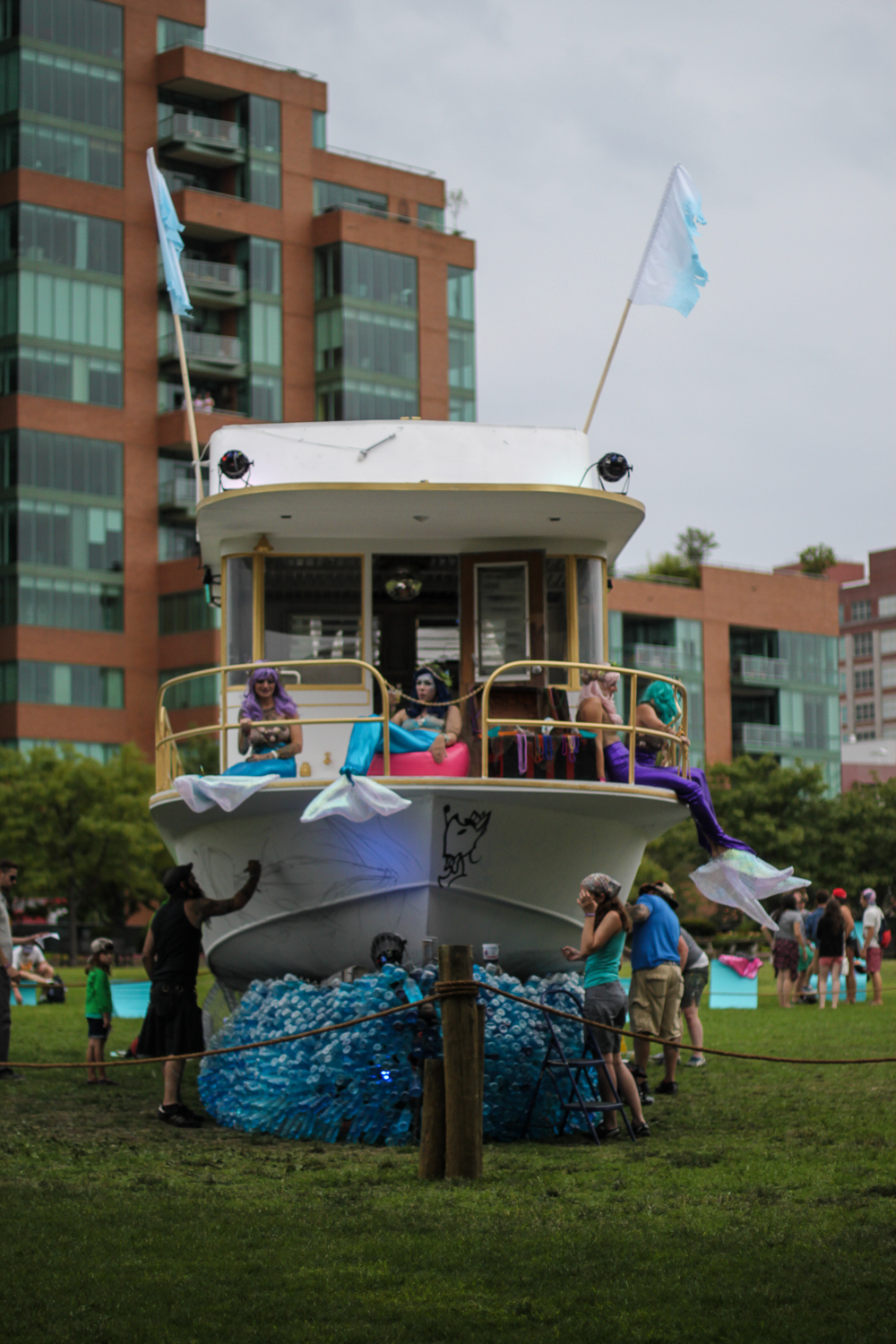 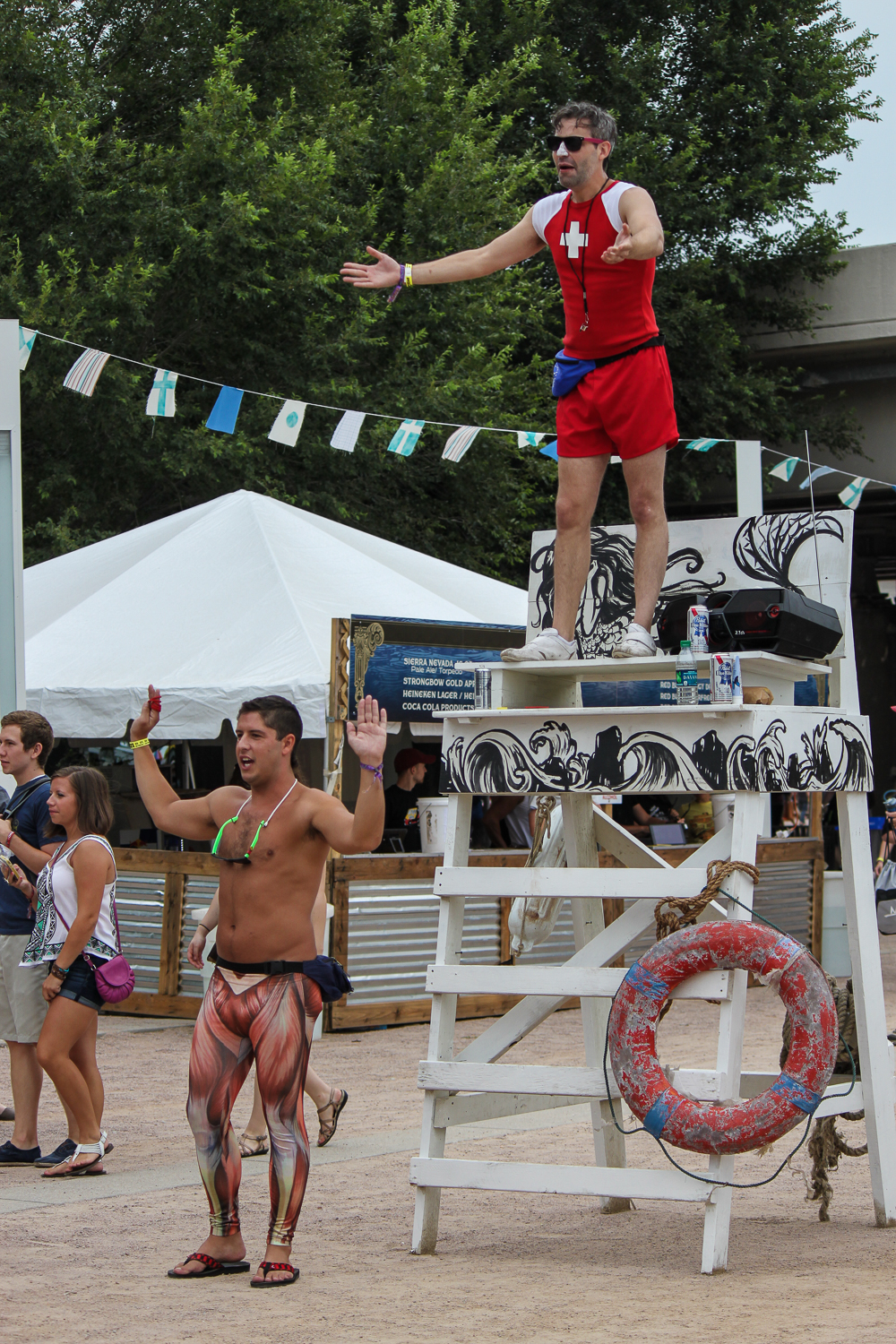 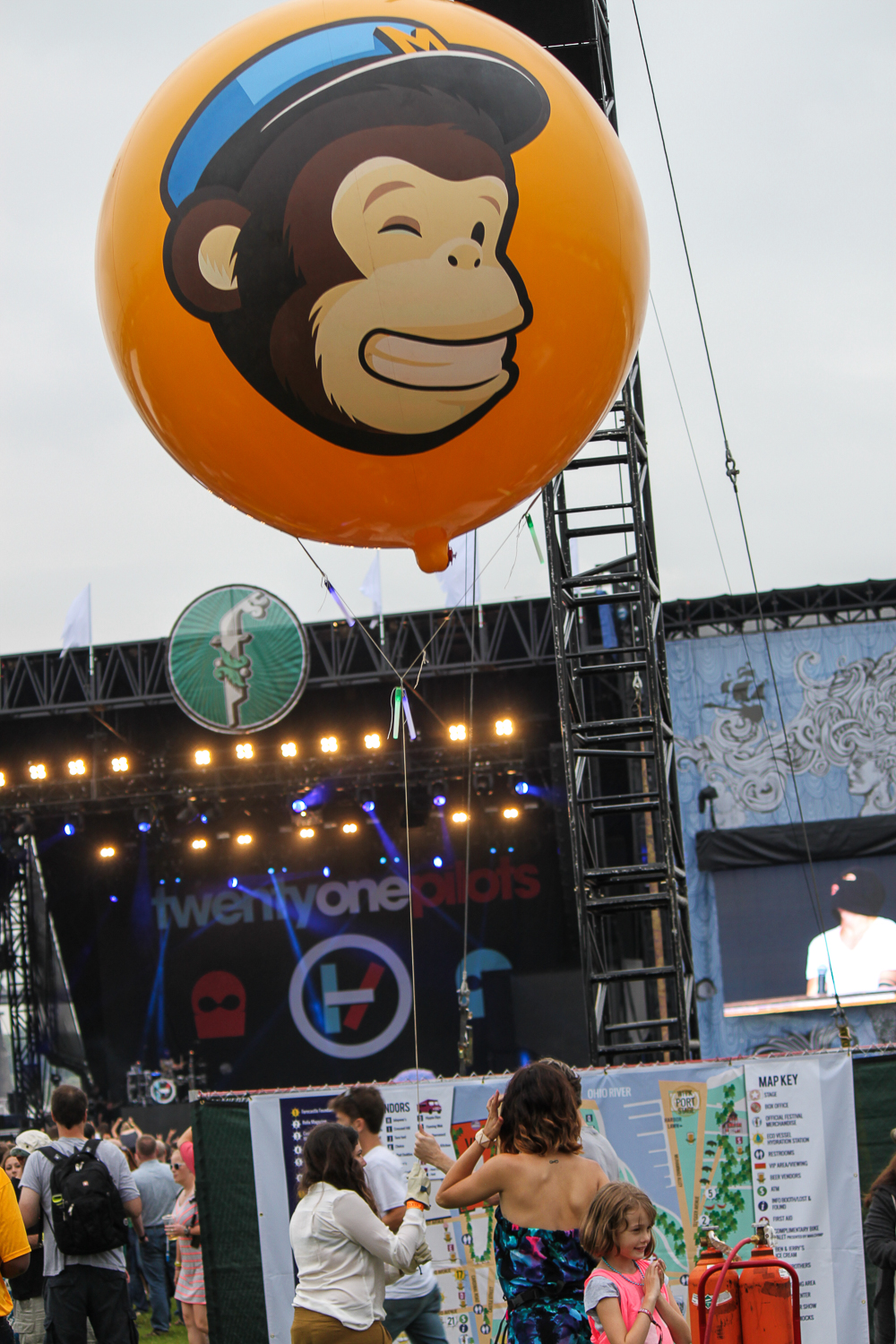 But enough about that. Let’s get to the music. I don’t have too many Must See acts on my schedule this year, especially today, so I did a lot of hopping back and forth between stages to catch as much music as I could.

Cincinnatti, Ohio-based band Public kicked off the festival at a surprisingly well-attended set for being the very first band. They’re basically completely un-Google-able (it gets worse: they used to be known as Crown), but their music is of the very energetic indie rock variety.  They list their influences as everything on Facebook, and it shows. There’s a little Matt & Kim, a little Arcade Fire, a little something else.  These guys are still pretty young, and I hope they keep with it, as their songs were entertaining and a great way to start off the day. 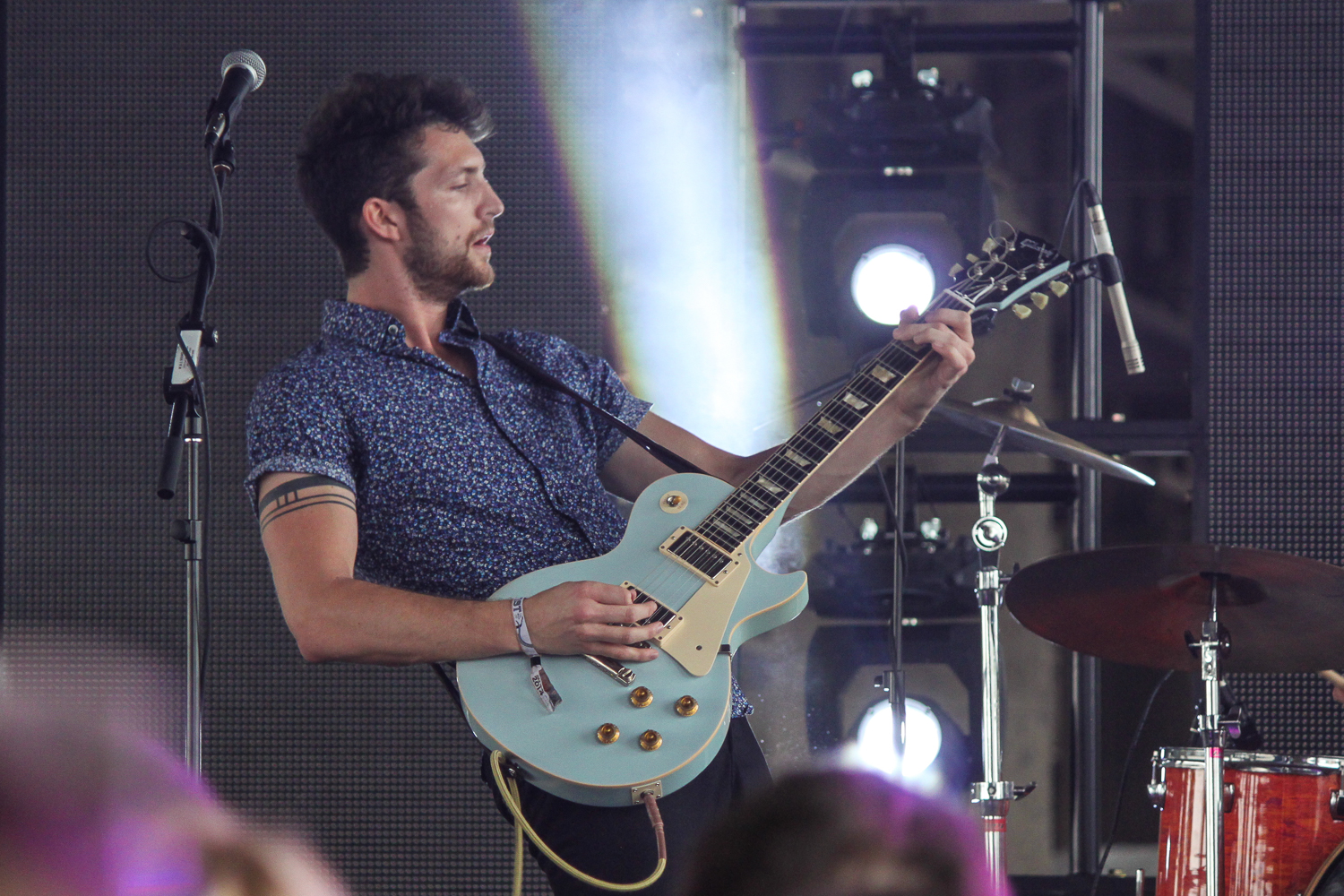 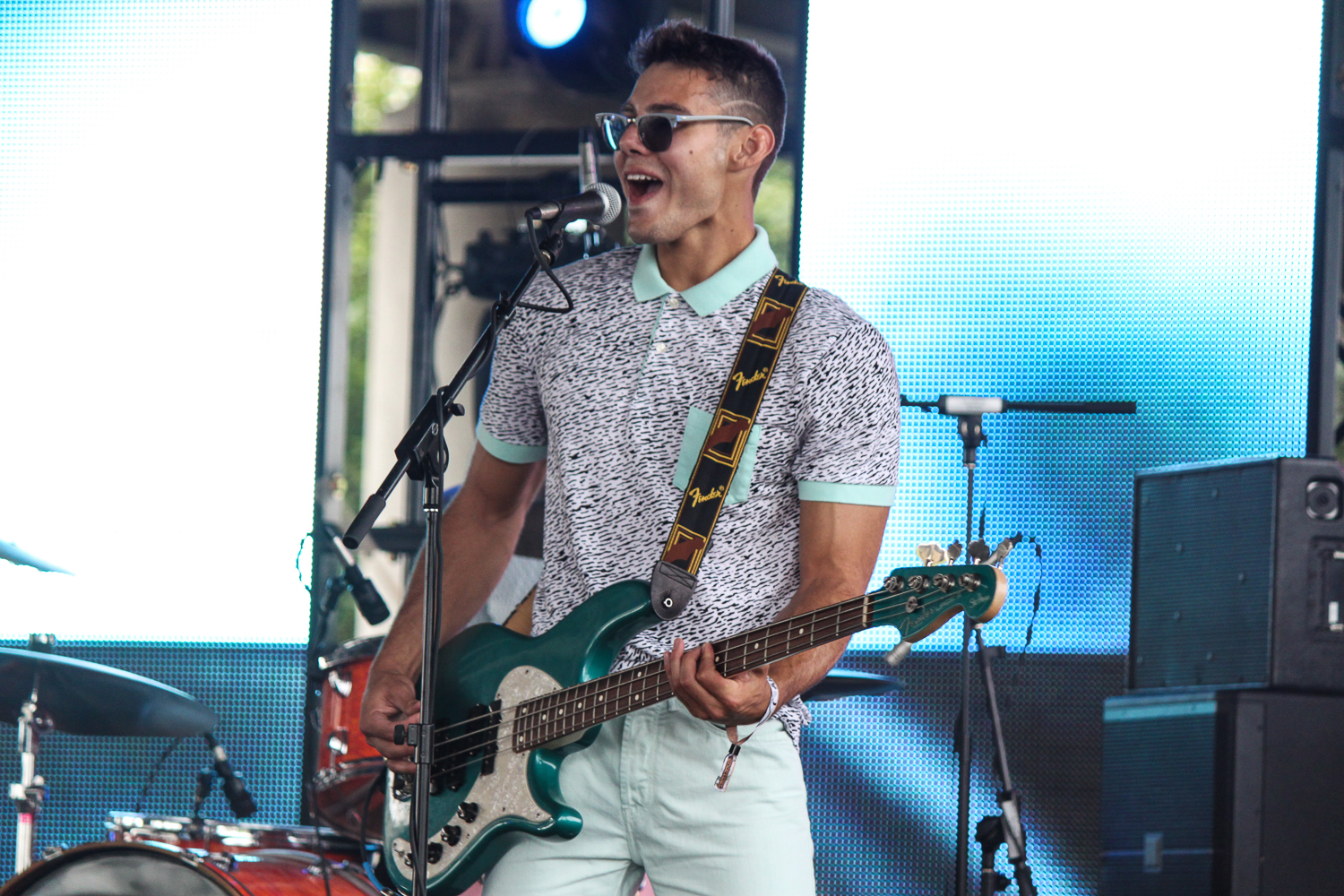 I stayed for part of Public’s set, then headed to the main stage to listen to a few songs from Benjamin Booker. Booker is a New Orleans singer-songwriter with a strong blues influence.  (Blues-tinged sets wound up being the theme of the day, with both JJ Grey and Gary Clark, Jr. taking the stage later that day.) Booker just released his first album this year, and it is a good one. I can’t wait to see what he comes out with next. 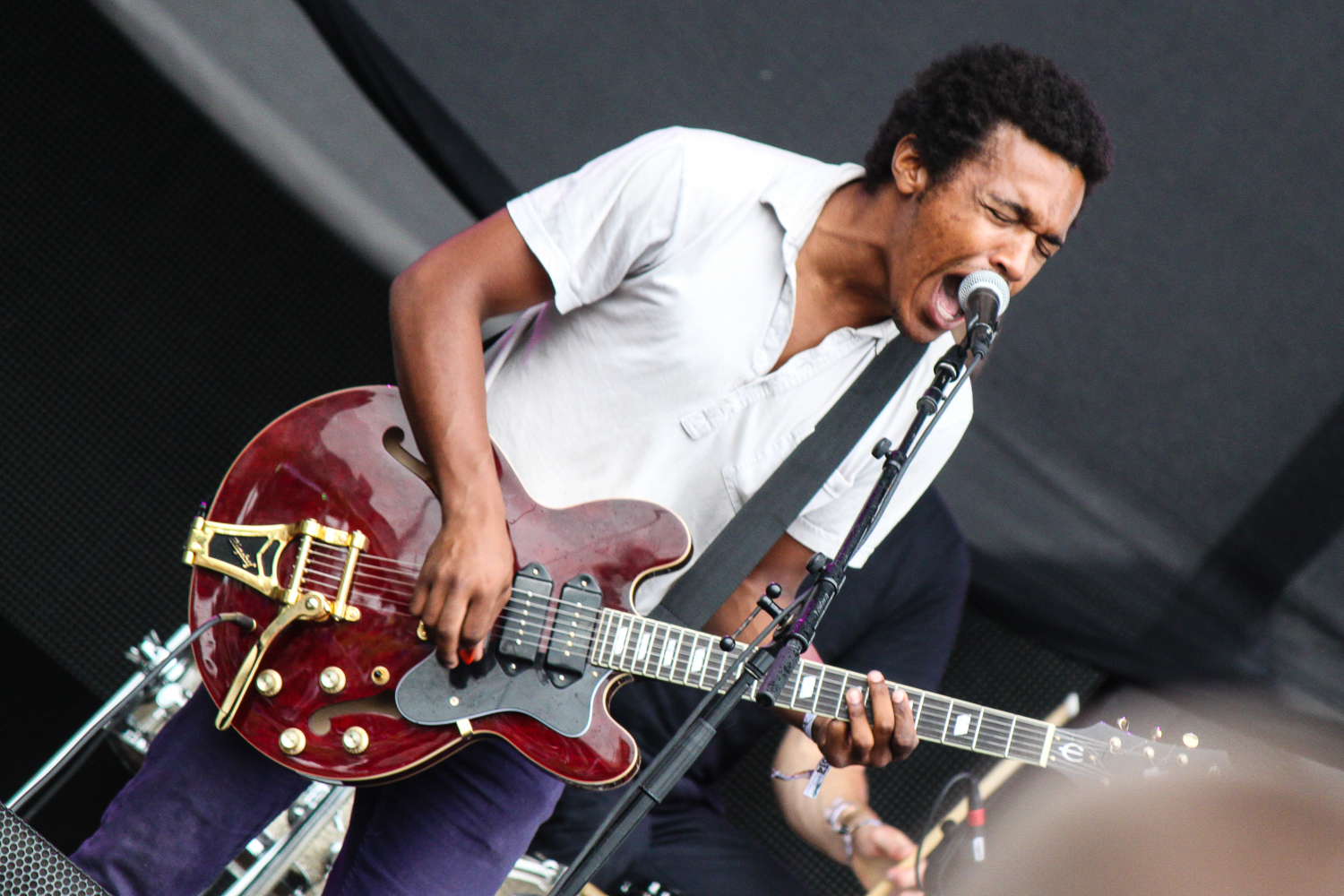 The Black Lips were up next. A steady, light rain had been falling all morning, and kept it up throughout their set. This is probably where I shouldn’t admit that I always confuse The Black Lips with The Black Keys – but I’ll admit it anyway. I don’t even think their music is that similar – The Black Lips are far more punk-rock-ish, but that’s what they all get for having similar names, I guess.  My own confusion aside, the songs I caught of theirs were just the right level of infectiously loud, gritty rock to keep the afternoon going. 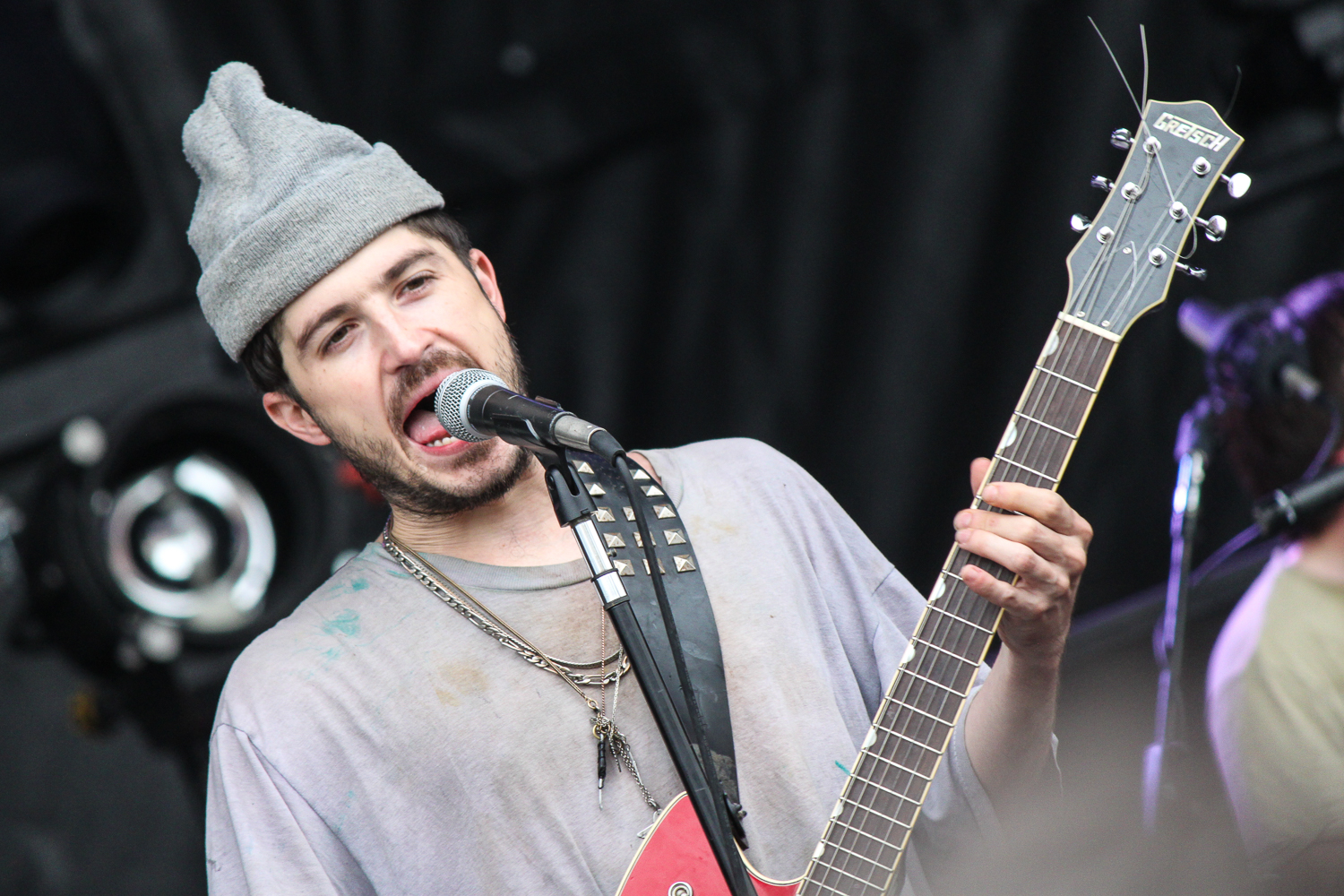 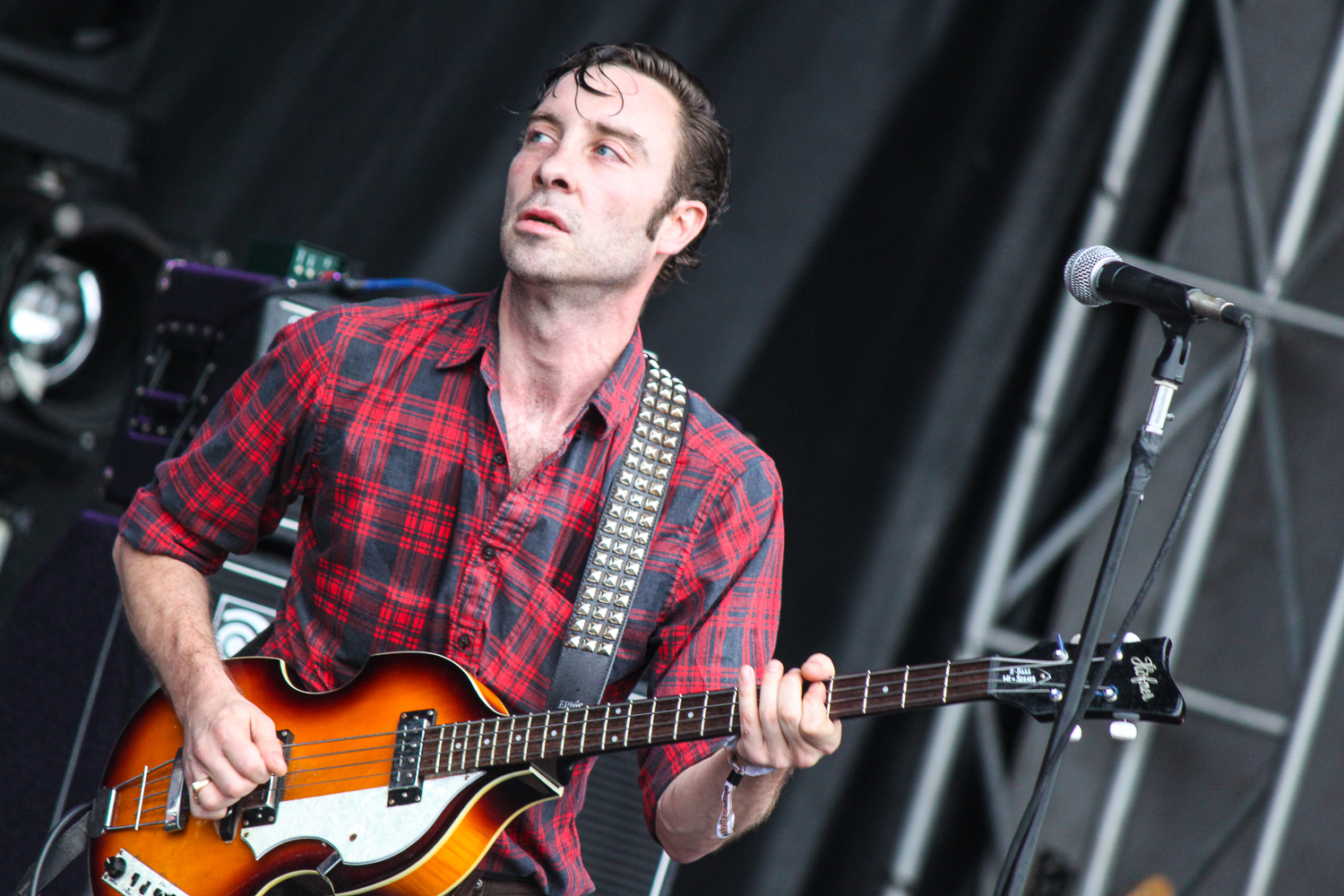 Here’s where the real meat of my day starts. I wandered past the main stage to catch JJ Grey. While Grey has been around for a long time, I don’t know that I was very familiar with his music. I was drawn in by his soulful voice and blues-rock sound, and was not disappointed. His backing band, Morfo, is absolutely fantastic as well. Grey’s set kept the energy going from start to finish and was an early leader for best set of the day. I’d only planned to stay for a few songs, but couldn’t manage to tear myself away until the very end. 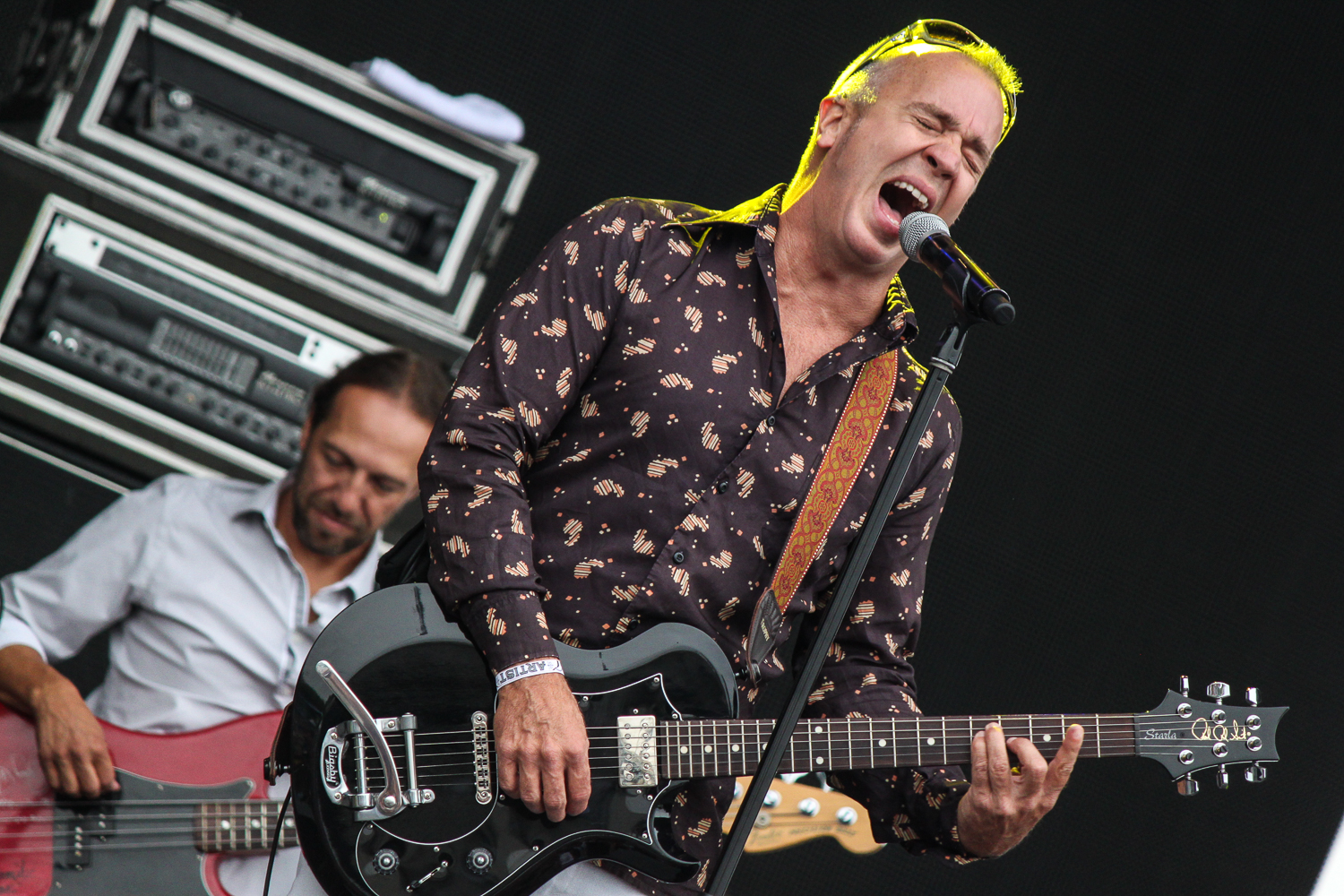 Afterwards, I managed to catch the last few sets of Foy Vance’s set. Vance is an Irish folk singer with, let’s be honest, a pretty epic mustache. He had an easy rapport with the crowd, getting them to sing along on several songs. Not only did they sing along, but like any folk-y crowd, they sang in harmony. (“We should start a band,” Vance remarked. “There’s still less of us than there are The Polyphonic Spree.”) I wish I could have seen more of his set, because his music is right up my alley, and the few songs I did hear made me want more. It worked on the rest of the audience, too: at the end of his set, he walked off stage, music still playing thanks to his looping pedals. The crowd, who sang the refrain of the chorus throughout for Vance, kept on singing long after Vance was gone. If you know me, you know that loud, aggressive punk rock isn’t always my thing, but I couldn’t pass up a chance to see CHIRP rotation regulars Against Me! I have such respect and admiration for Laura Jane Grace, and it was a joy for me to see her on stage. Her happiness and enthusiasm for their set was infectious and I found myself enjoying the set far more than I’d actually anticipated. 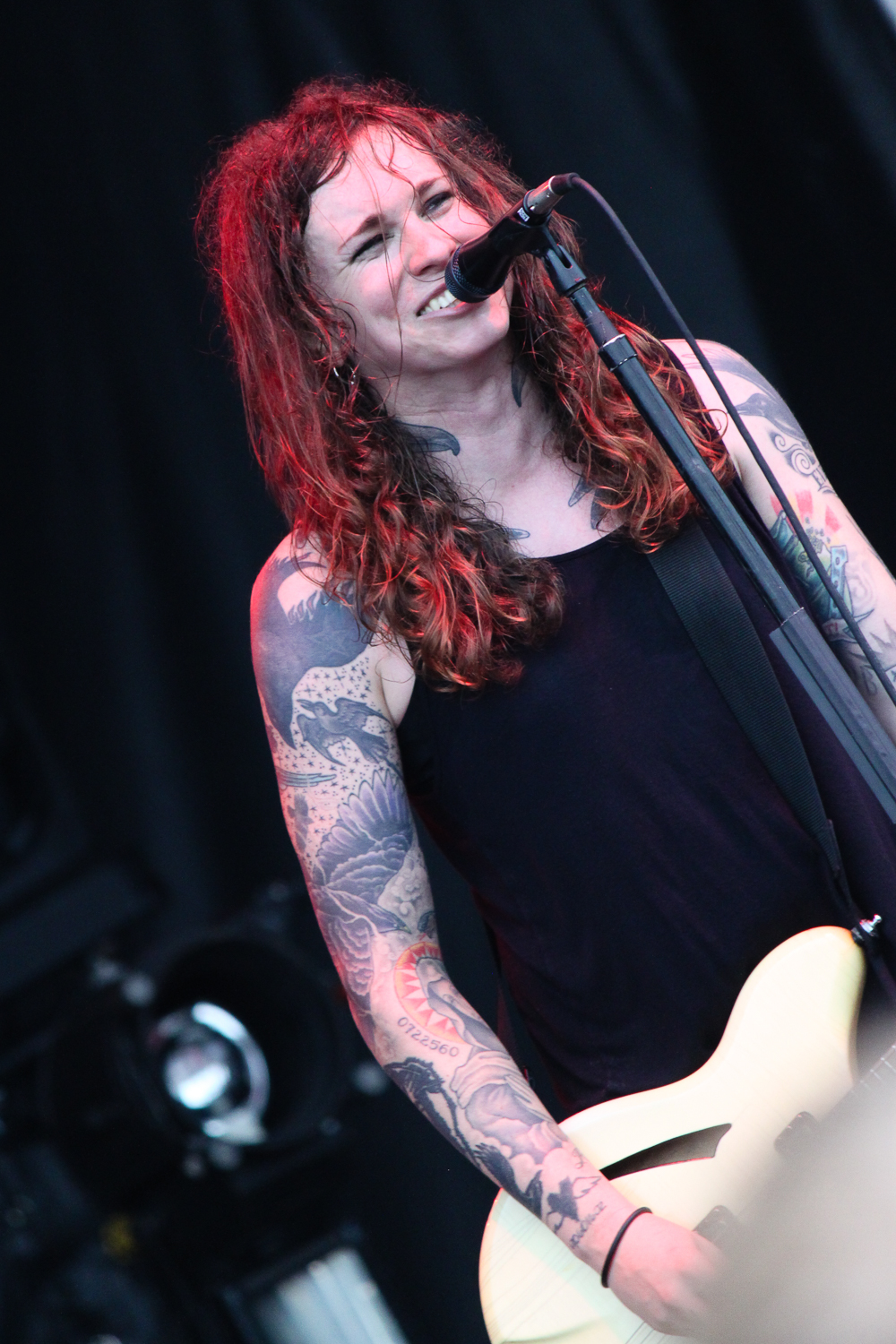 One of my favorite things about Forecastle is the sheer variety of genres represented, and this year was no different. Last year, I found myself having to choose between seeing a bluegrass act, or Killer Mike and El-P. (I chose the latter.) This year, I scurried off from Against Me! to go catch a set from country/folk singer Willie Watson.  Watson is a founding member of Old Crow Medicine Show who parted ways with the band several years ago. He plays solo now, a mixture of original songs and his own takes on older folk and blues standards. Watson’s voice and inflection are perfect for the songs he sings, and the stories he tells. 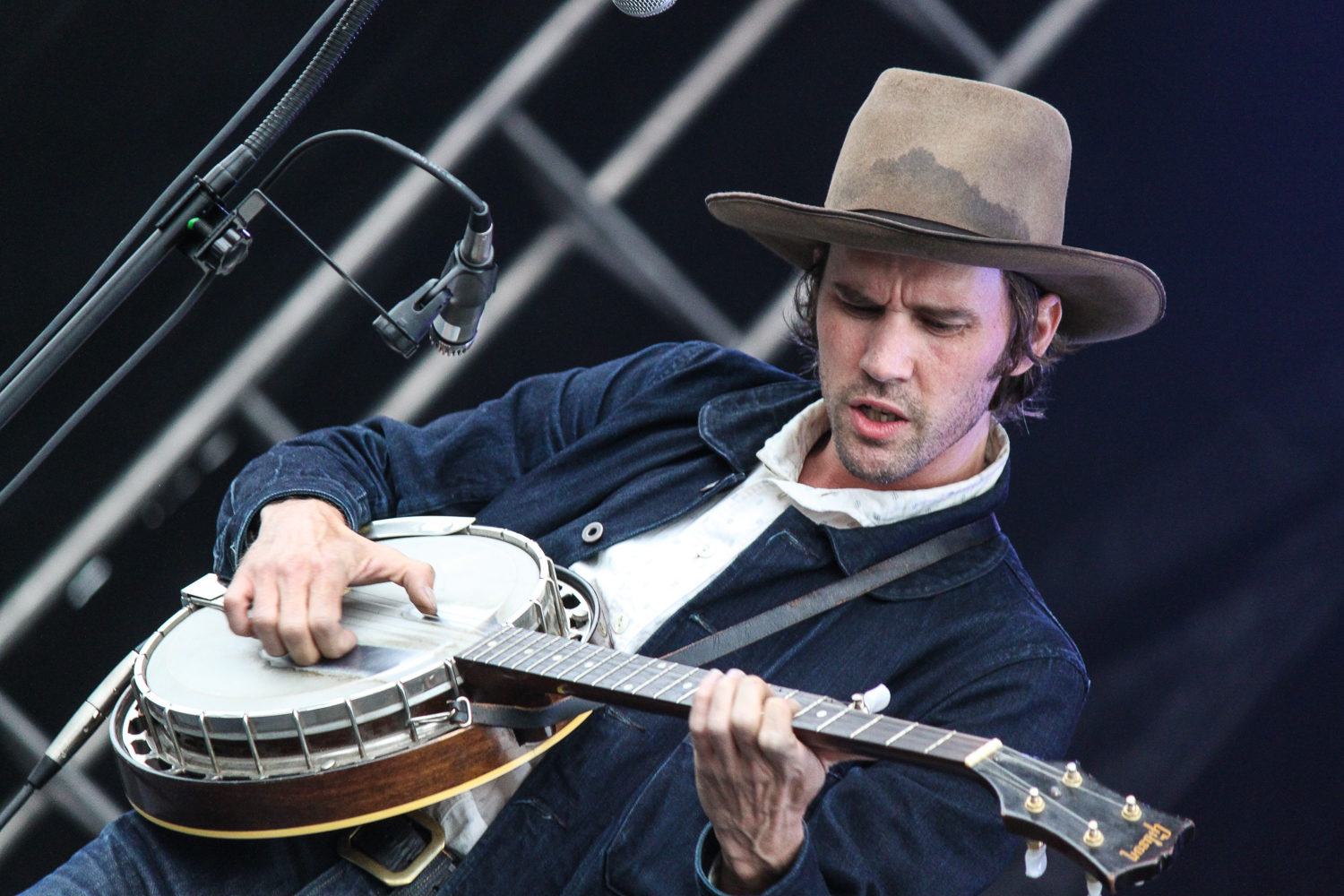 Of course, it’s not a day at a music festival for me if I don’t have at least one moment where I feel really, really old. Watching Twenty One Pilots’ set was that moment for me. When I made my way over to the main stage, I noticed their drummer was wearing a bright green alien-or-maybe-luchador mask. After a few songs, both band members left the stage and changed into black and white skeleton shirts and masks. I didn’t get any of it. The music was a little bit electronic, a little bit indie, a little bit piano pop, a little bit white boy rap. A bunch of teenagers knew every single word to every single song. I felt so, so very old. Despite myself, though, I … really started to get into the set? The energy of the band and crowd were infectious and I wound up with a big smile on my face. (I still felt really old, though.) 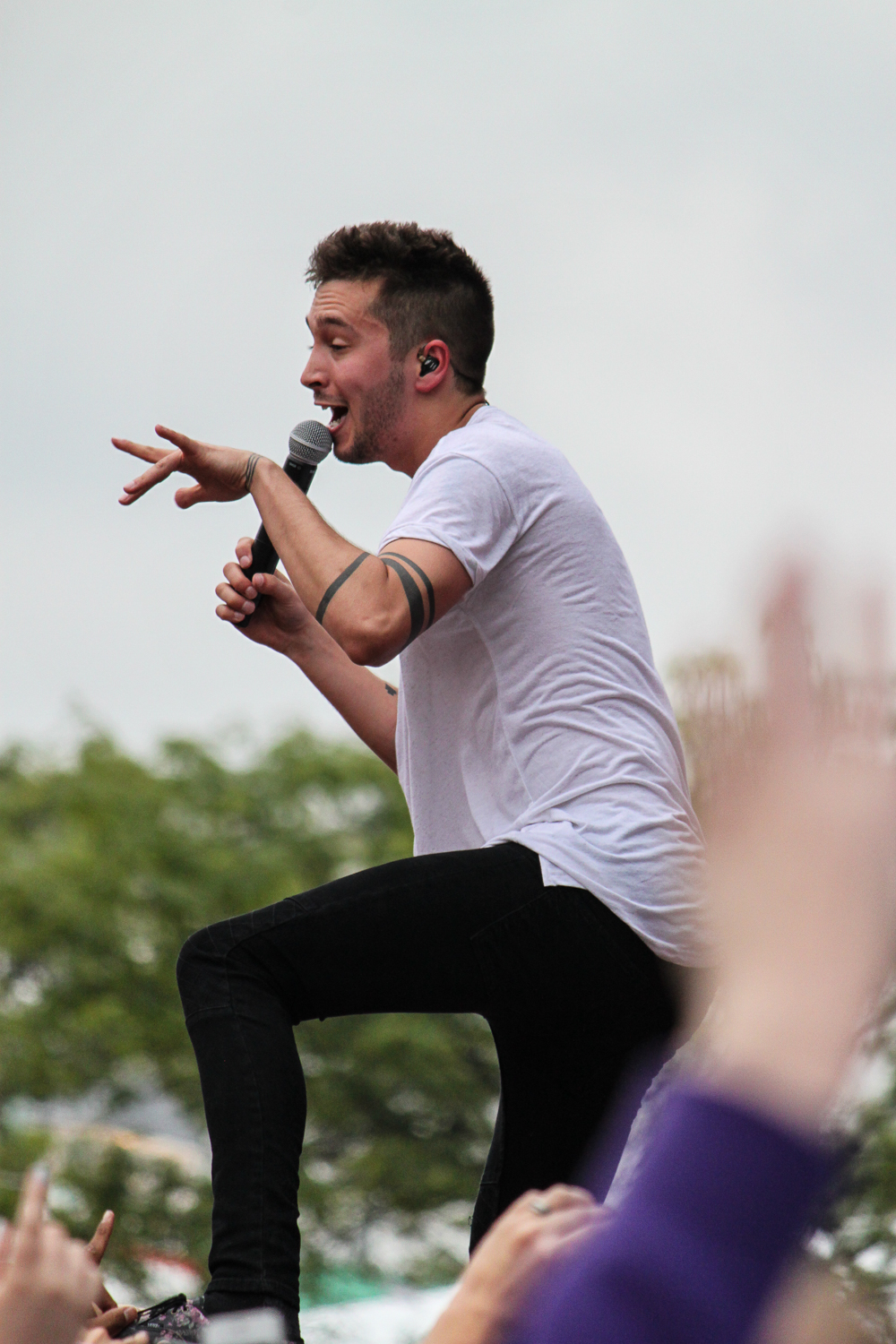 I wanted to see Spoon. So did literally everyone else at the festival (except for the people who were pretty much camping out for Outkast). So I only stayed for a song or two, then fled from all of the bros.  Sorry, Spoon, I’m sure you were great. Instead, I went over to go see Nashville-based Leagues, at a much more sparsely attended set. It was a wise decision, as aside from the fact that I had room to breathe, their music was also excellent. I can’t quite pin a genre on them – sort of, but not quite, Southern rock, if I had to guess – but they absolutely deserved a larger crowd than the one they had. I’m looking forward to looking up more of their music, and keeping an eye on them for the future. After Leagues, all attention turned to the main stage for Outkast, who were headlining as part of their reunion/summer festival tour. I chose to watch the beginning of Outkast’s set from a hilltop on the edges of the festival site, since the idea of pushing through the throng of people at the main stage was pretty unappealing. Outkast sounded great from what I heard, and the crowd was really into it, but let’s be real: I’m old and tired and the only songs of theirs that I really know are Hey Ya! and Ms. Jackson, which were almost certain to feature much later in the set than the first few songs, so I made the executive decision to trudge back to my hotel.

Stick around, because there are still two more days of Forecastle to report back on. At the end of the weekend, I’ll have a Flickr gallery of all of my photos for your enjoyment.