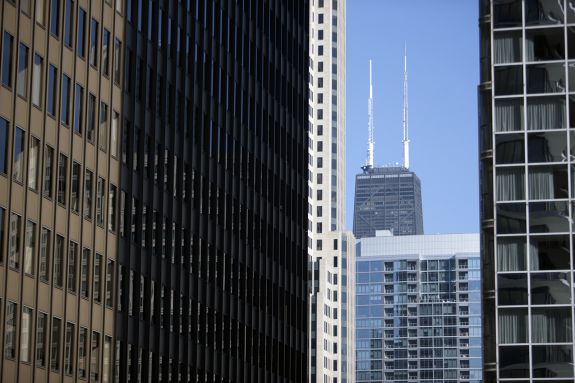 The city of Chicago has always been a rich subject for artists and thinkers. It’s the kind of city that’s not only a great place to create ideas, but is also an idea in itself, the kind of muse that gets people thinking about the nature of urban living and how mankind interacts with the natural and artificial world. CHIRP is pleased to help present the latest installment of this ongoing conversation on Tuesday, November 19th, when the Museum of Contemporary Art hosts a preview screening of Chicago, a new project from artist and film maker Sarah Morris. Senior Curator Dieter Roelstraete will host a discussion with Morris following the film.

Morris, who lives in New York and London, has a truly international influence, having had solo shows across continental Europe and in the US. Her work focuses not only on the images, but the meanings behind their compositions and their relations to each other. Socio-political themes are often brought to the surface from her work, as well s the underlying psychology of the people who build cities and live in them.

Morris’ work will be part of the MCA’s new exhibit City Self, which explores the different ways that artists, both local and from elsewhere, look at and interpret the city of Chicago. The exhibit will be on display from November 29th 2013 to April 13, 2014. The Museum of Contemporary Art is located at 220 E Chicago Avenue in Chicago.