8:22am Landshapes Siberia from Contact (Bella Union/PIAS) Add to Collection

Alli Klein: Family of Noise writesMusic In Pictures: The End of the World Party at The Empty Bottle (12/21/12)

Well, we're still here. But a triple threat of local bands brought the house down as if the world were ending at the Empty Bottle on Friday night, Dec 21st.

If we were going to die, we wanted to free our souls with rock and roll. And to those who survived this onslaught of apocalypse inducing volumes, I salute you.

Show openers Vamos, who describe their sound as “swamp-dance” performed as a 3 piece this time, and got the crowd good and riled up early with verses about chemicals and stones, with song titles to match. Singer Ryan Murphy has the perfect amount of both attitude and goofy energy on stage, which he gets from a background in acting. These boys are improving with every set I witness. Watch out, Chicago.

Magic Milk took the stage second. Singer Kenneth Alden stripped down to his skivvies and donned hot pink underwear for the occasion. This aided in the full rippling effect of the leg shaking phenomenon that seems to happen during Magic Milk's surfy-punk-garage-psych set. Yes, they are all those genres and more. Using a telephone receiver in place of a microphone, the set took on an other-worldly trippy sound, yet still very danceable. It was my first time seeing them play, and this first impression made definitely a fan outta me.

Headlining this end of the world party was none other than Chicago favorite Rabble Rabble, who in the last six months have taken on a fuller sound, adding guitarist Andrew Kettering (Strychnine, Plastic Crimewave Syndicate, ex-Great Society Mind Destroyers) to their line-up.

Toward the end of their heavy set, a guest saxophonist joined the stage adding another layer to the already explosive menagerie. Rabble Rabble continued to steam roll their audience through a power house of a set. The Rabblers are now leaning toward more of a drone-y metal, which makes room for more head banging (and more hang overs?) More importantly, Rabble Rabble make live music extremely fun again. You can tell by watching them that they’re having fun, and they make DAMN sure their crowd is having fun. Stage diving and crowd surfing were abundant this night, including Vamos front man Ryan Murphy. 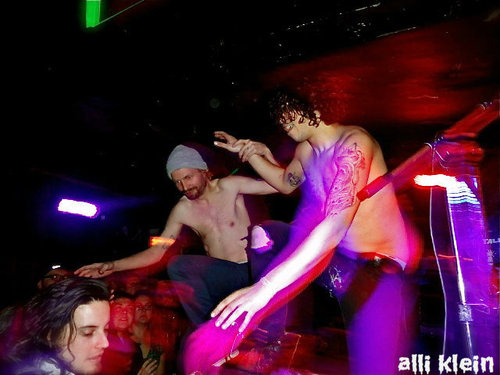 I walked away with a belly full of beer and that oh-so-satisfying ear ringing from volumes reserved for the rapture.

Click here to go to Alli's Flickr page to see a full set of pictures taken at the show. You can catch ALL THREE of these bands (and more!) at Quencher’s Saloon on New Year’s Eve.