8:14am Guided by Voices Lizard on the Red Brick Wall from Tremblers and Goggles by Rank (GBV Inc.) Add to Collection 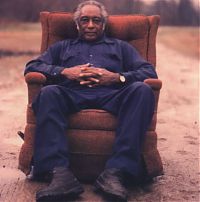 RL Burnside is proof that music isn’t always a young man’s game, as he didn’t make a mark in the blues until the late ‘80s and early ‘90s. He had moved to Chicago in the ‘40s, befriended Muddy Waters, but had his life derailed when his father, two brothers and an uncle were all murdered in Chicago, which, as one could imagine, inspired his music.

He then moved back to Mississippi, where he killed a man during a dice game and was convicted of murder. After serving only six months (!) in a work farm, he eventually recorded his first sides in the ‘60s, but wasn’t discovered until the late ‘80s, and when he was signed to Fat Possum in the ‘90s, the world finally got to hear Burnside’s classic Delta blues sound. He even did an album with Jon Spencer producing. Let’s pay tribute to a modern blues giant by grabbing your iPod or MP3 player, hitting shuffle, and sharing the first 10 songs that come up.