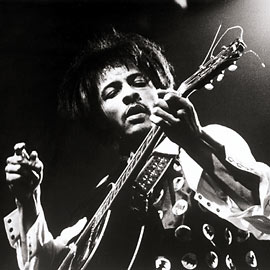 Today, let’s celebrate the birthday of the frontman of a band that produced one of the best albums of the ‘60s. Arthur Lee was born in Memphis, but moved to Los Angeles when he was five and by high school, he met Johnny Echols and they played in bands together. He was soon writing songs, and one of his songs was recorded by a local R & B singer, with Jimi Hendrix playing guitar on the session. Love came together in 1965, with Echols and Bryan McLean, among others. The band soon became a top live attraction and garnered a local hit with their radical rearrangement of Burt Bacharach’s “My Little Red Book”. This led to a deal with Elektra Records. Love was a perfect band for the psychedelic age, mixing all sorts of genres together, but this didn’t yield any hits. Nevertheless, their first three albums are great, with Forever Changes one of the most essential albums of the era. Lee later went solo and then dealt with various substance abuse and legal (i.e. jail time) issues. In the early ‘90s, he got himself back together and began touring as Love with mega-fans Baby Lemonade backing him up. I saw this edition of Love twice, and Lee was fascinating and the music sounded great. Let’s honor Lee by grabbing your iPod or MP3 player, hitting shuffle and sharing the first 10 songs that come up.

Next entry: Your Official Lineup for “D.C. Against the World” at SXSW on March 13th!