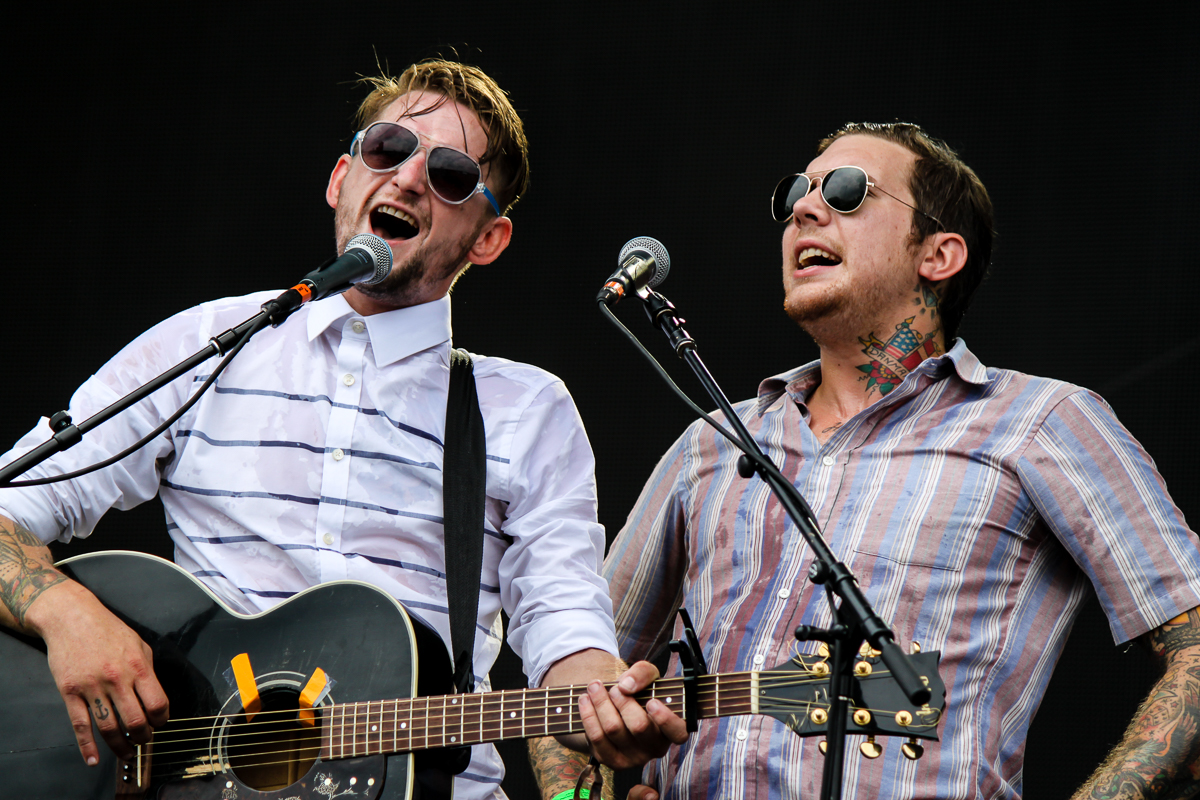 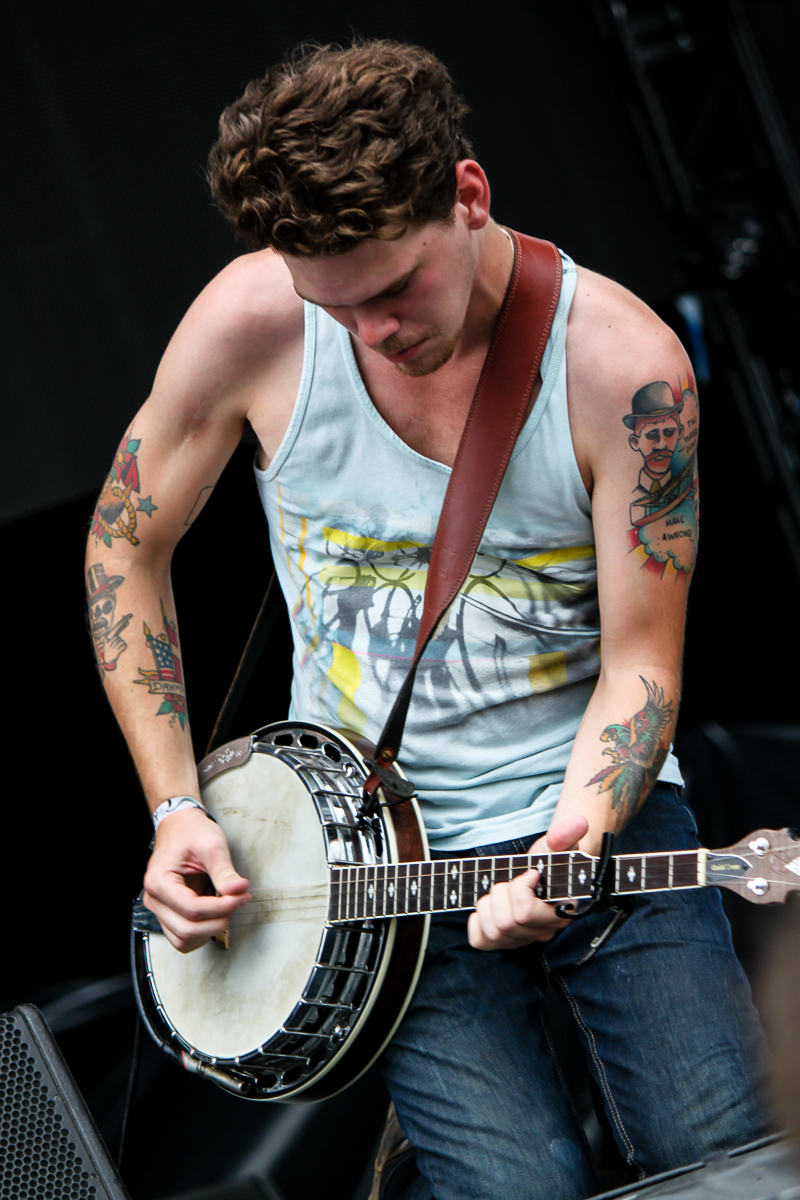 I wanted to walk around a little before the next set I wanted to see, and so I caught a bit of a set from The Weeks. The music wasn’t entirely my scene, but, okay, take a look at the photo of Cyle Barnes and tell me what you think his voice sounds like. If you guessed a less dad-rock version of Eddie Vedder, congratulations, you’re correct, and you’re also me.  His voice was really interesting and not at all what I expected to come out of a skinny string-bean dude like that. 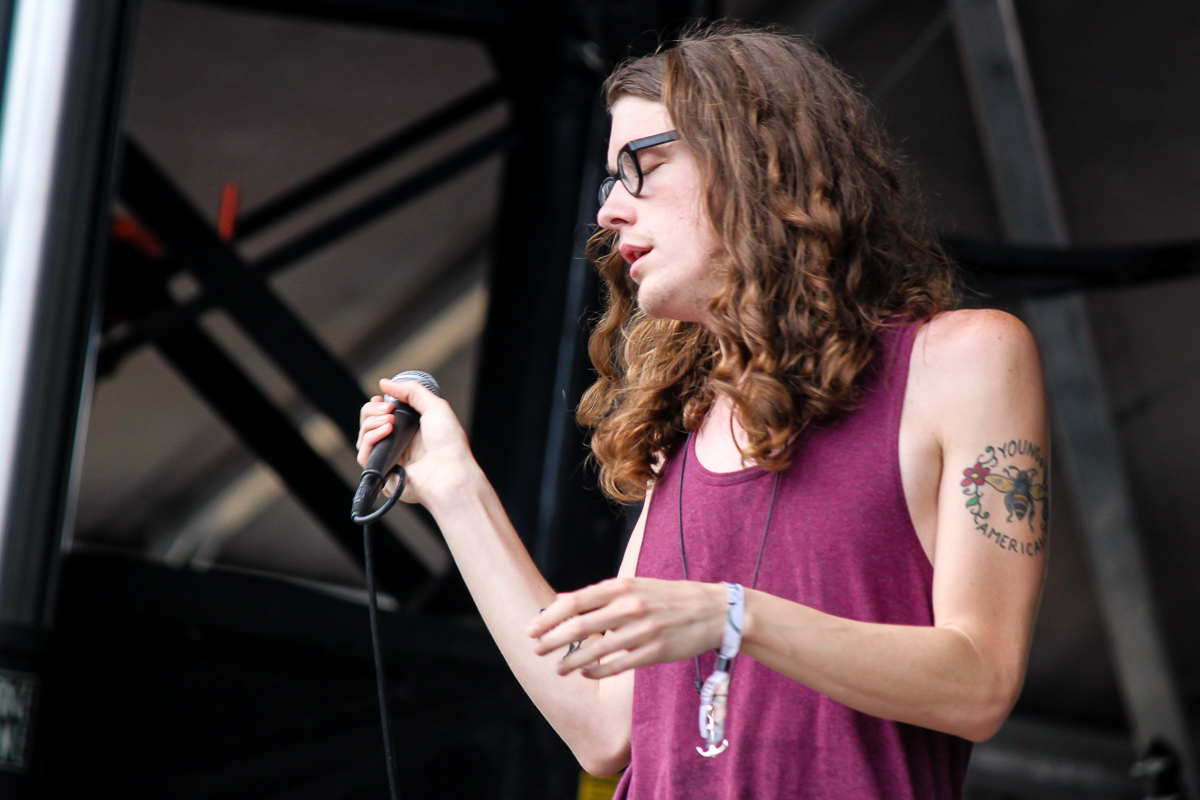 Sunday at Forecastle was really a celebration of awesome ladies for me, though, and Lucius’ set showed that off.  I discovered their album late, and I still judge everyone in my life who didn’t tell me that I was going to love it and therefore needed to listen to it ASAP. I’ll call it my favorite album of 2013 that I didn’t know existed until this year. Anyway, my timeliness issues aside, Lucius’ set also happened to be one of my favorites of Forecastle. They kicked their set off with “Go Home”, one of my favorite songs on the album. On the album, it’s a slightly melancholy break up song (“Go home / I don’t need you anymore”) but live, they really kicked it up to be defiant and powerful. That could be said for their whole set: music that came off as kind of twee on the album sounded loud and energetic and powerful live. They even managed to squeeze a few covers in, one from local boys My Morning Jacket (“Wonderful”), and in the middle of closing song “Ruins”, there was a highly entertaining bridge of “I Wanna Dance With Somebody”. Definitely go see these gals live when they pass through your city, it is absolutely worth it. 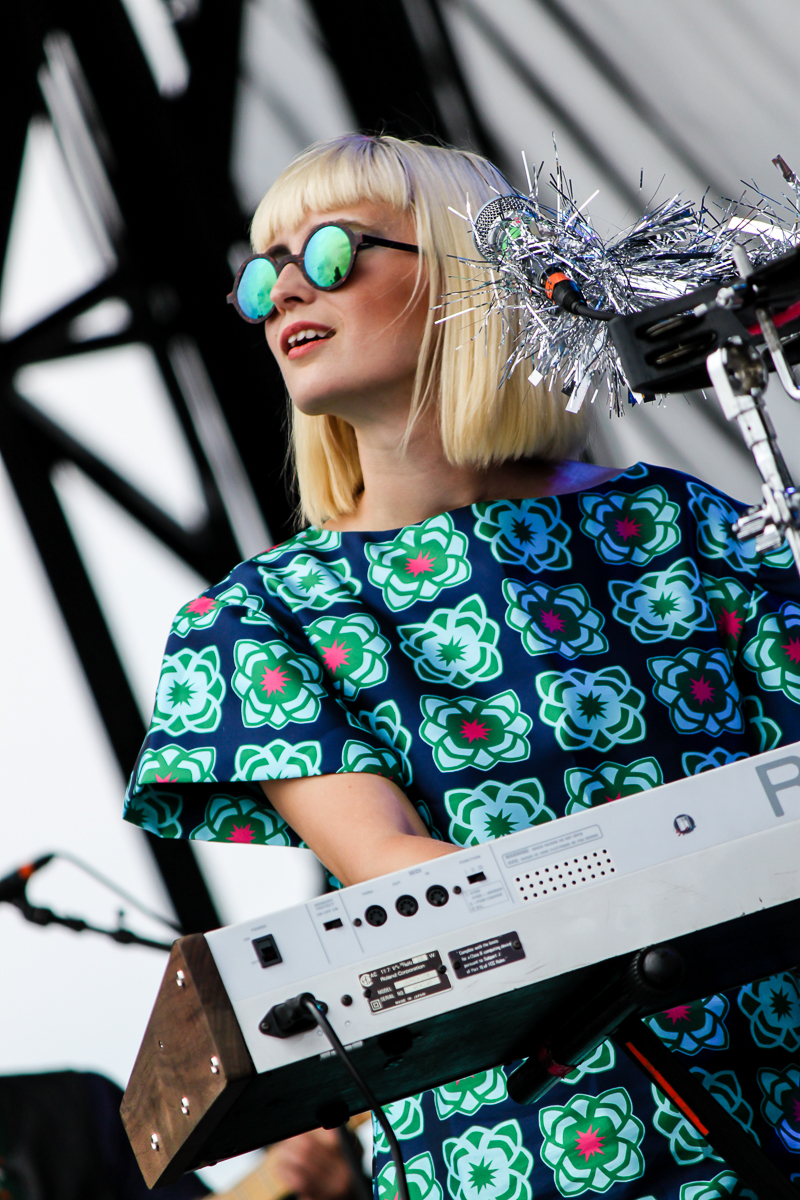 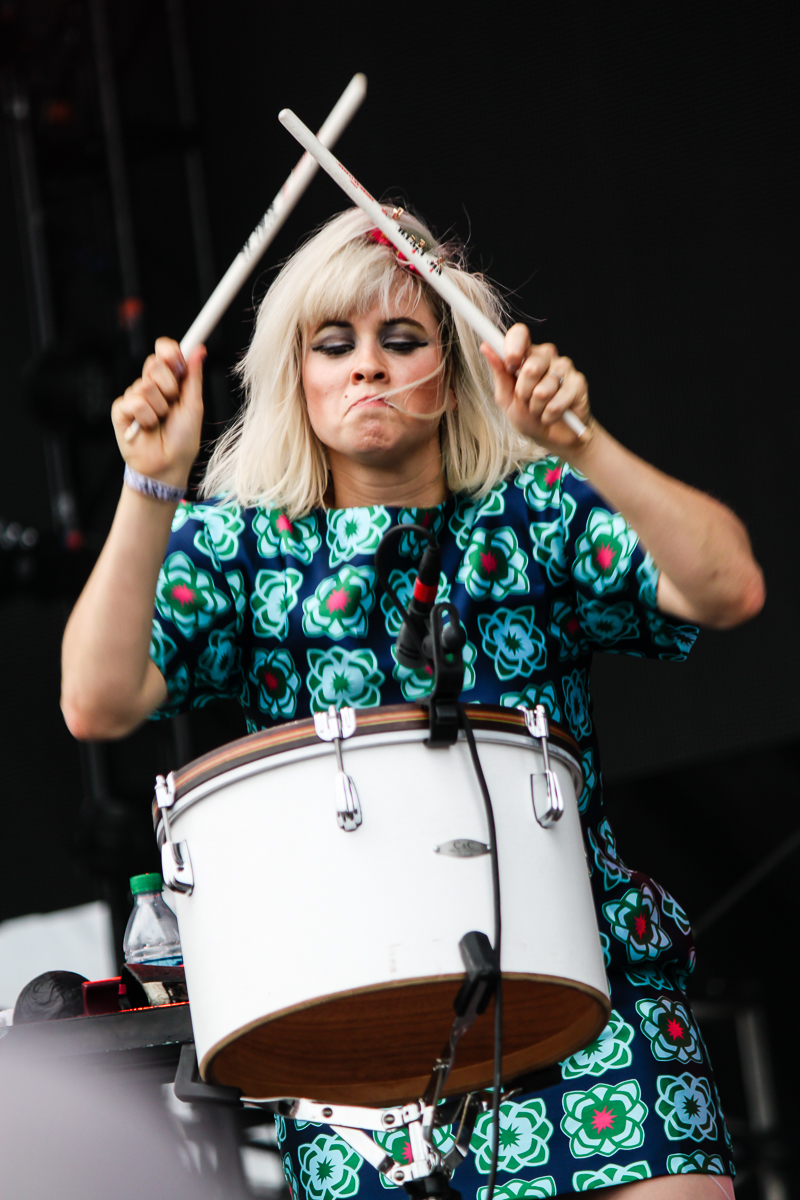 After Lucius’ set, I went to catch the end of Sharon Van Etten’s set. And, man, listen, not to be all “I liked her before anyone knew who she was” about it, but, man, I liked her before anyone knew who she was! I remember seeing her at Schubas years and years ago, just a quiet, shy woman with a guitar, and now she’s got a full band and is absolutely killing it in front of very large crowds of people. She’s really great at working an audience, always sharing fun, typically somewhat self-deprecating stories in between songs, and bantering with the crowd. Forecastle was the last top on Van Etten’s tour, a fact that she pointed out, telling everyone with pride that “We’re still a band and everything. We haven't broken up!” I enjoyed most of Van Etten’s set from the fringes of the crowd, letting her voice and the melancholy of her songs relax me under the hot summer sun. 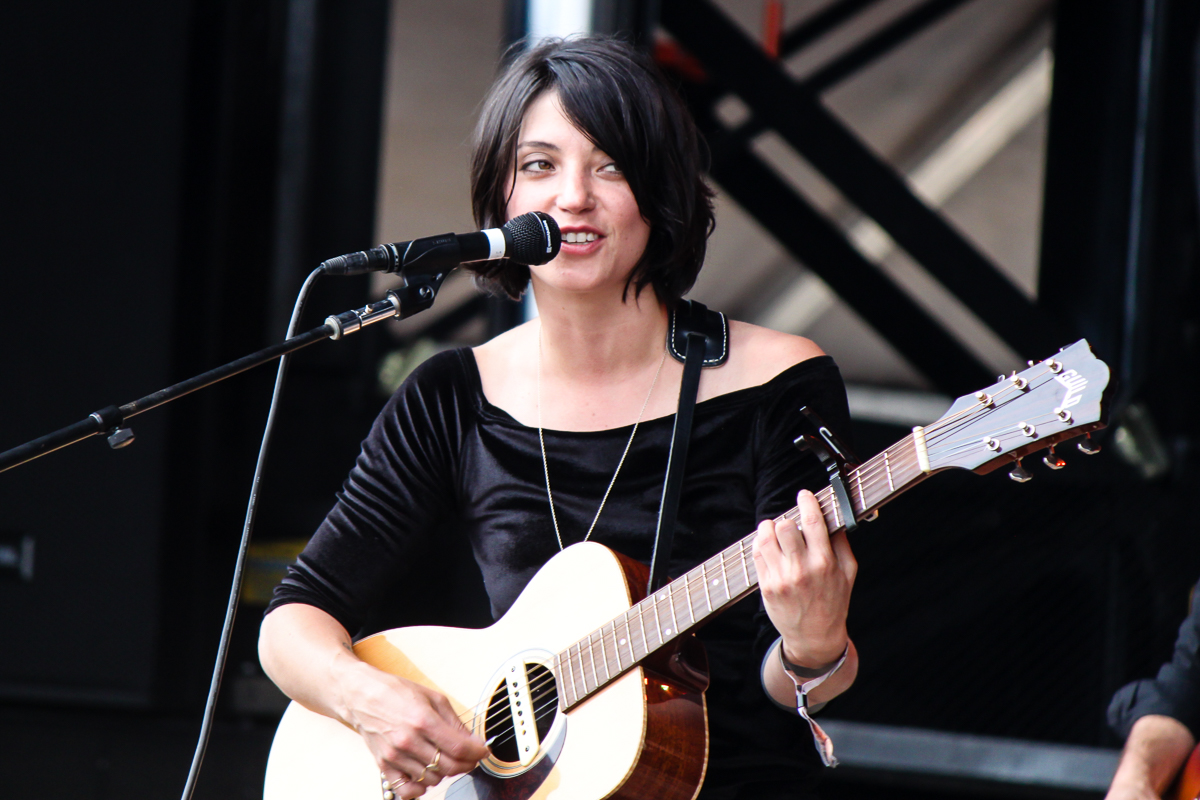 I spent most of the rest of the day hanging around the main stage, first to see Brett Dennen, whose folk rock sounds drew a very large crowd, many of whom were there to dance and have fun. With exciting anthem-like songs such as “When We Were Young”, the crowd had no shortage of opportunities to dance around. I think I’d only really known Dennen’s name before his set, so didn’t really know what to expect, but it was great music to just lay out a blanket to and enjoy. 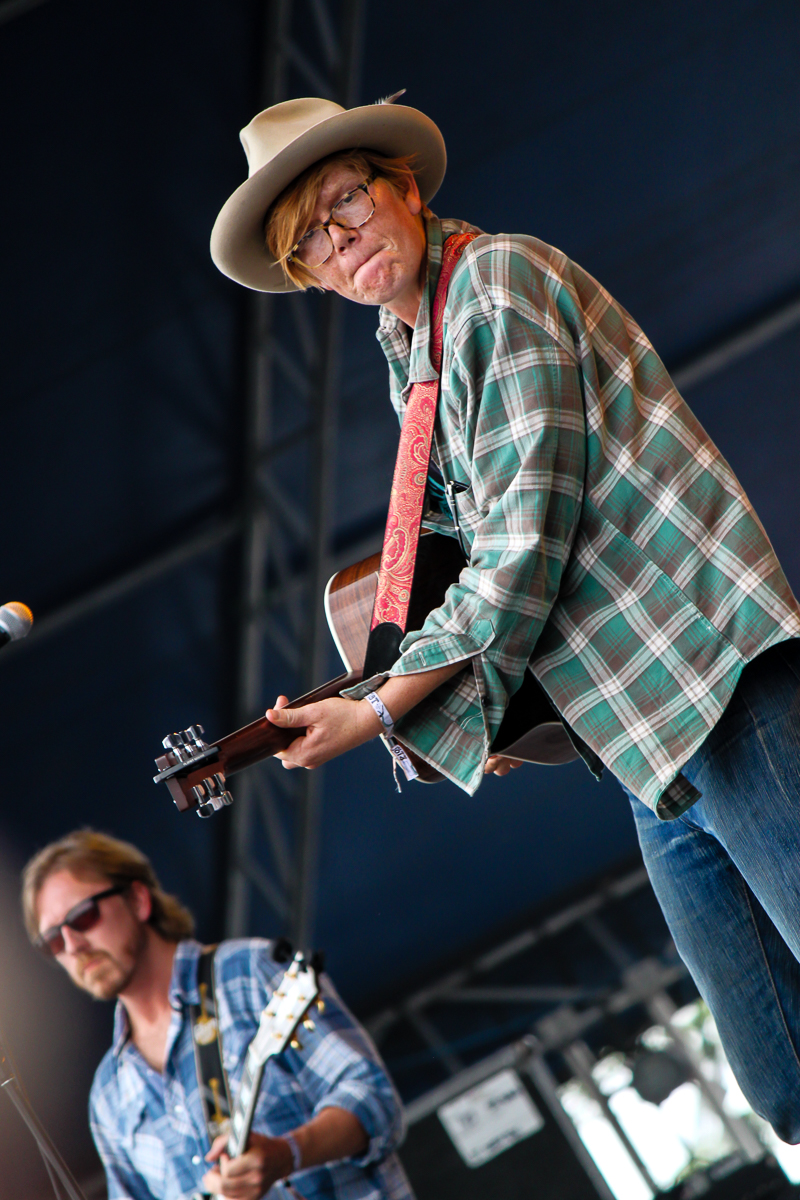 The next act I saw was Jenny Lewis, also at the main stage. She’s another artist who I’ve wanted to see for a long time but have just kept missing out on.  Dressed in a brilliantly cheerful, rainbow/sky patterned outfit with a guitar to match, Lewis mined both her back catalogue and her upcoming album The Voyager for material. She brought out Louisville natives The Watson Twins to accompany her on a few tunes. While I don’t think that her new stuff is anything that groundbreaking, she’s got a fantastic, soothing voice and puts on a captivating live show. 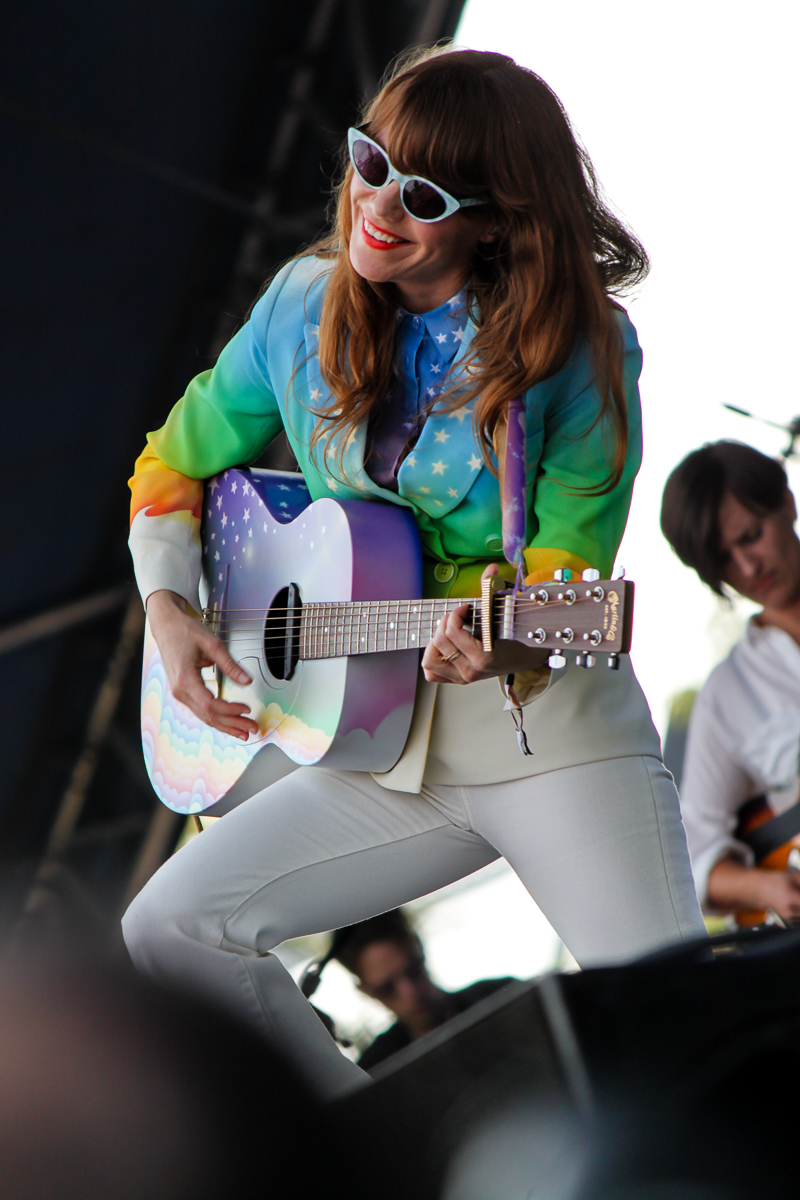 Believe it or not, I actually skipped seeing Nickel Creek, because I had a sinking feeling that the stage they were on was just going to be absurdly crowded.  Instead, I went and found myself some dinner – seriously, let’s talk some time about the number of questionable things I eat during music festivals – and chilled out for a while. One of my favorite things about Forecastle is actually the ample amount of green space for people to just sit and chill. You can find somewhere near every stage to sit to the side, listen, and often still see the performance (if you’re me and that’s still a thing for you). It’s nice to know that the festival isn’t so overcrowded that free space is at a premium.

The next set I saw was Hayes Carll, who was introduced as “a fine American, but an even better Texan”. While on his albums, I feel like some of the grit has been scrubbed off, Carll is in full on dirty country swagger when he performs live. He writes some very intelligent, thought-provoking country rock, and is often compared to Todd Snider in the topics that he covers in his songs. “KMAG YOYO” is about a soldier injured in Afghanistan who hallucinates that he’s drug into a spy agency and is sent into outer space. “It’s really blowing up the country charts right now,” Carll says. “It’s got all the keywords they’re looking for these days.” It’s a great tune, incredibly surreal, and highly reminiscent of Bob Dylan’s delivery in “Subterranean Homesick Blues”, and is pretty representative of Carll’s style. 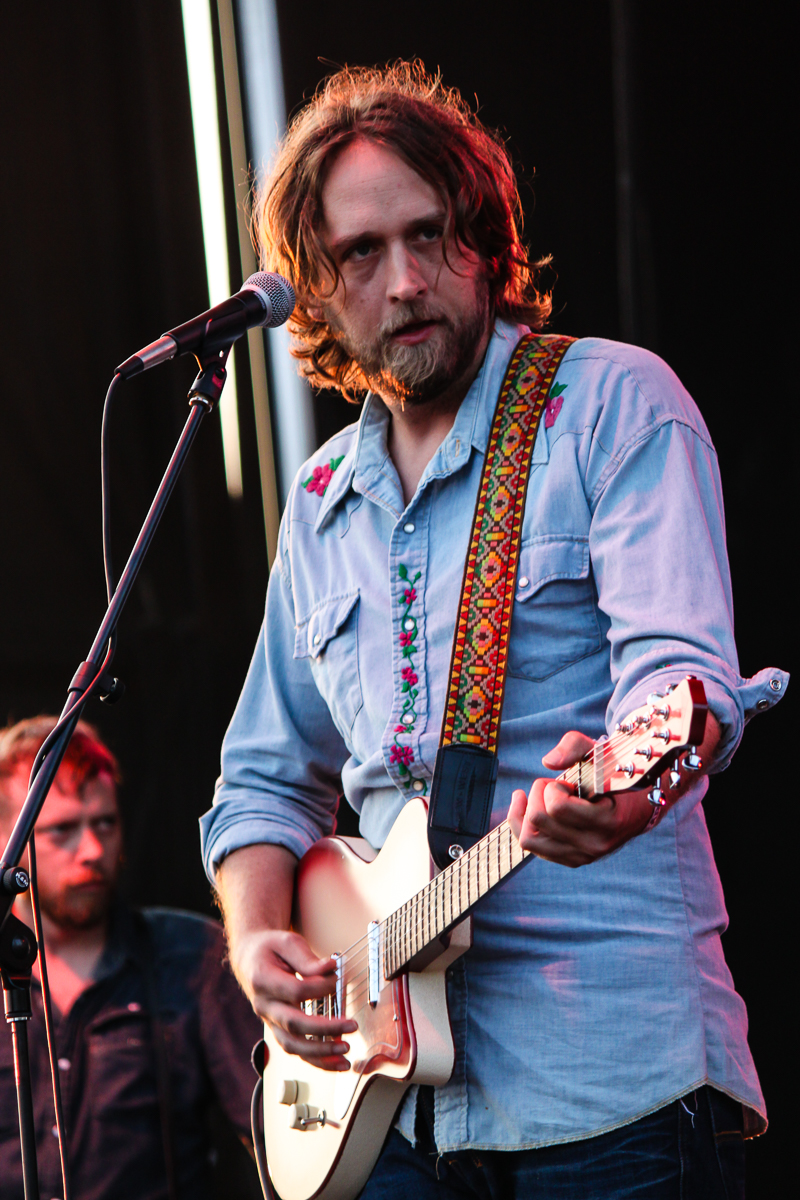 Beck ended the festival, and I stayed for most of his set, sitting on the back of the lawn with a funnel cake, trying not to get stepped on by some truly awful white boy dancing in the crowd. Everyone was super into the set, even if I’m positive that most of the people around me weren’t even born yet whenever “Loser” came out (1994).

I’d like to write more but right now I’m having an existential crisis over the fact that “Loser” came out TWENTY YEARS AGO.

I’ll just be over here, friends, feeling very old. Thanks for sticking with me – hopefully I’ll be back next year to share more Forecastle with you!