The face of homelessness brings images to mind of souls bared on cardboard and subsequent gratitude for the familiar jangle drop in a cup. Sometimes we know the progressive story of why someone is living on the street. Sometimes it’s not that easy. We all know them, and may even find ourselves among them.

For one Chicago woman, it took the experiences of forcing homeless people out of condo building doorways she sells on Michigan Avenue for her to realize as a community in a great city, this just isn’t right.

“I thought tourists must think we’re horrible by the way our homeless population are treated,” Jacqueline Hayes, founder and President of the Chicago Help Initiative (CHI), said.

It was 1999 and Hayes’ first phone call was to Monsignor Boland of Chicago Catholic Charities. He offered dining hall space at the Archdiocese of Chicago to host meals for those in need. To say services expanded from there is an understatement. 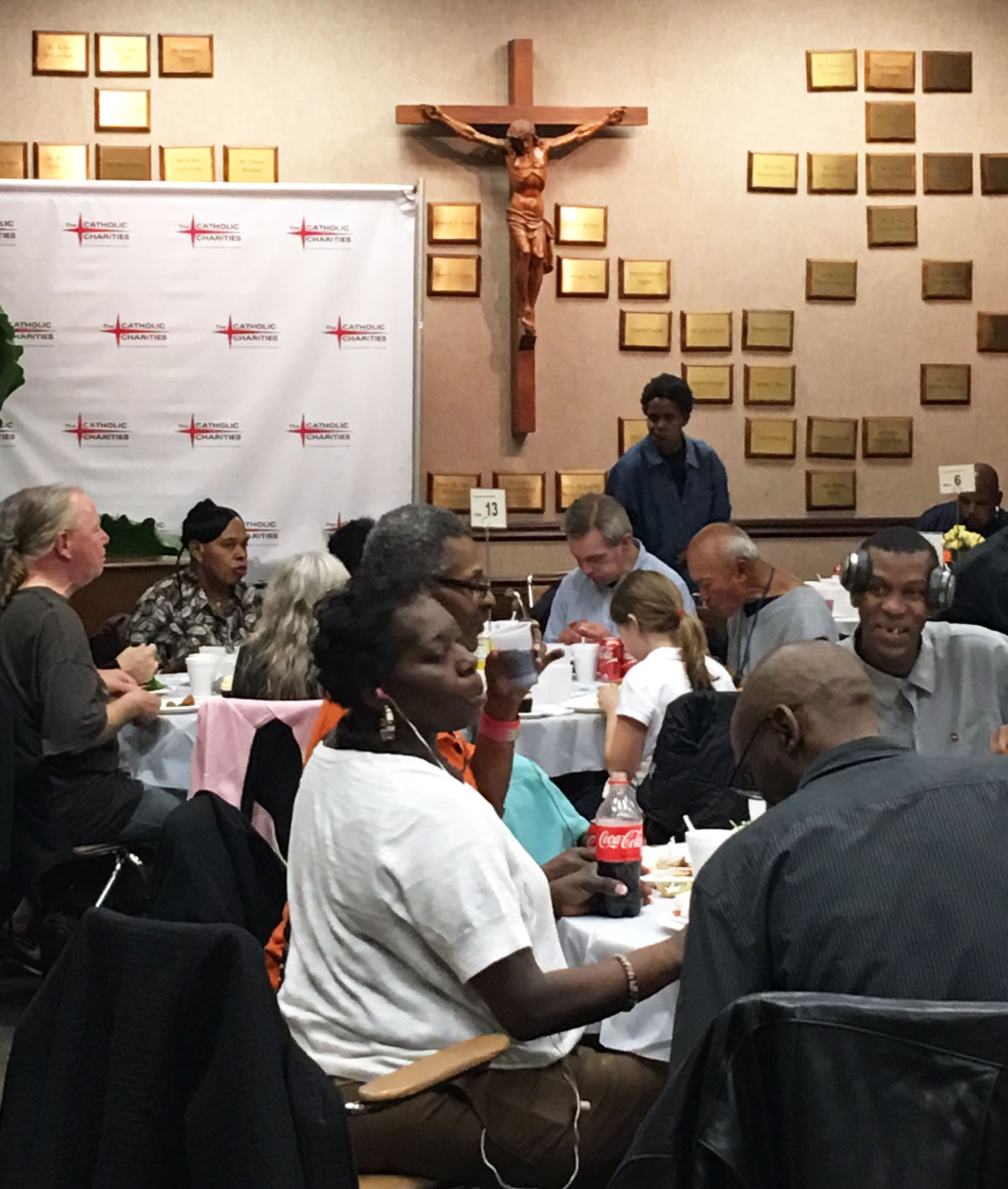 Restaurants like Eli’s Cheesecake and Flemings Steakhouse partnered with Hayes by donating meals and the white linens went down for the first time in March of 2001. To date almost 160,000 meals have been served.

“Part of our mission is to assist guests in bettering their lives and become contributing members of society once again,” Hayes said. “We serve these meals in dignified setting where they can be at ease and avail themselves of the resources offered.” 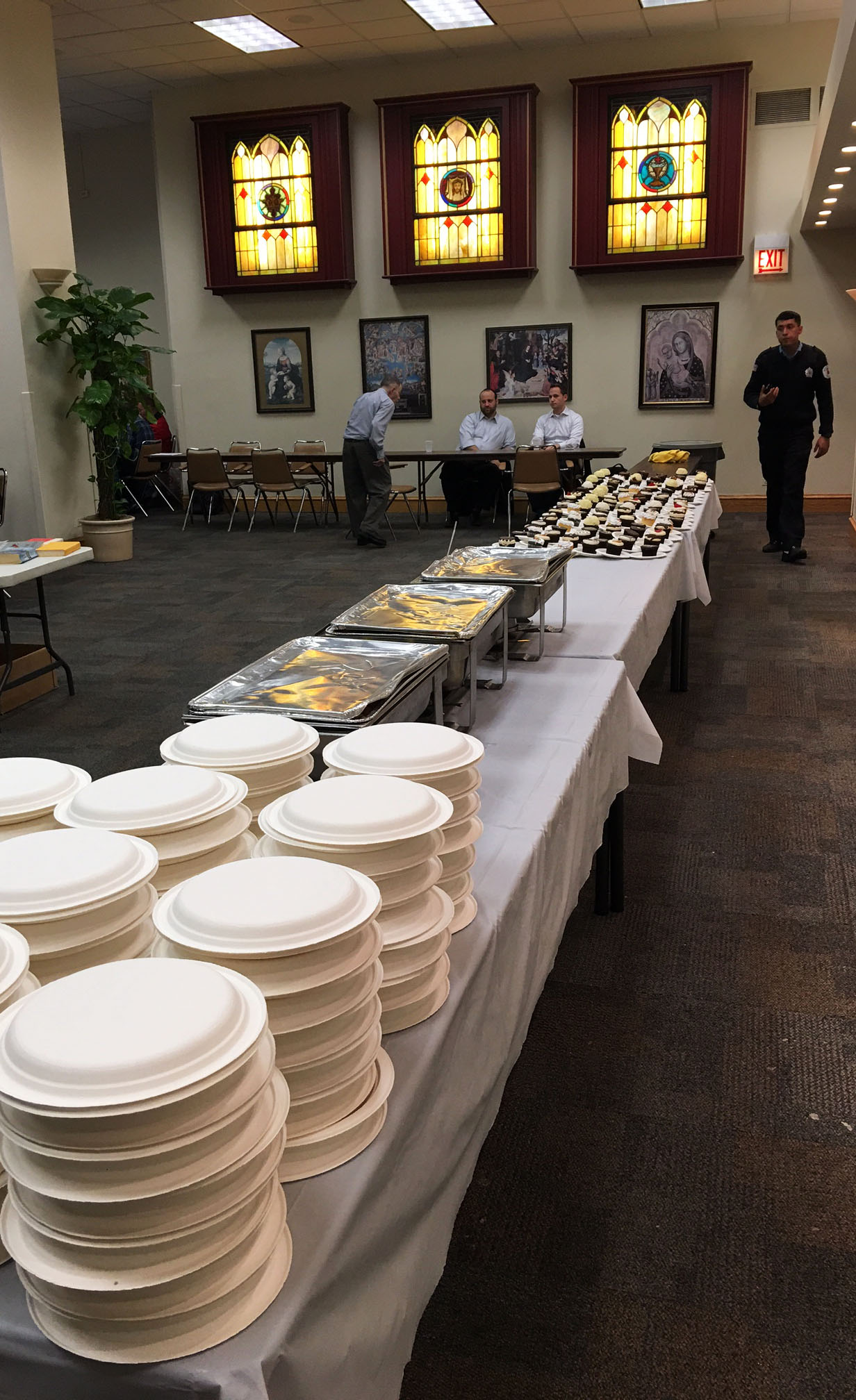 At 4:30 PM every Wednesday 130 guests dine inside the hall. A line forms outside until the doors open. After capacity there are 70-bagged meals handed out.

A lot of resources happen because of experiences with the diners: When Hayes passed out a needs-based survey and some people didn't fill it out, she asked “Why?” And they said, “I can’t read.” For the Chicago Help Initiative that resulted in training from Literacy Chicago, and tutoring takes place right after the meals.

Hayes and her team of volunteers listen and develop important relationships with guests that produce the range of services on hand. Some of these include two social workers and a nurse practitioner at every meal, a job board, a resource table for housing or shelter information, entertainment like singers or a magician, medical students from Northwestern University who provide blood pressure screenings, HIV and Hepatitis C testing, a smoking cessation program, bike repair services, and more if you can believe it. 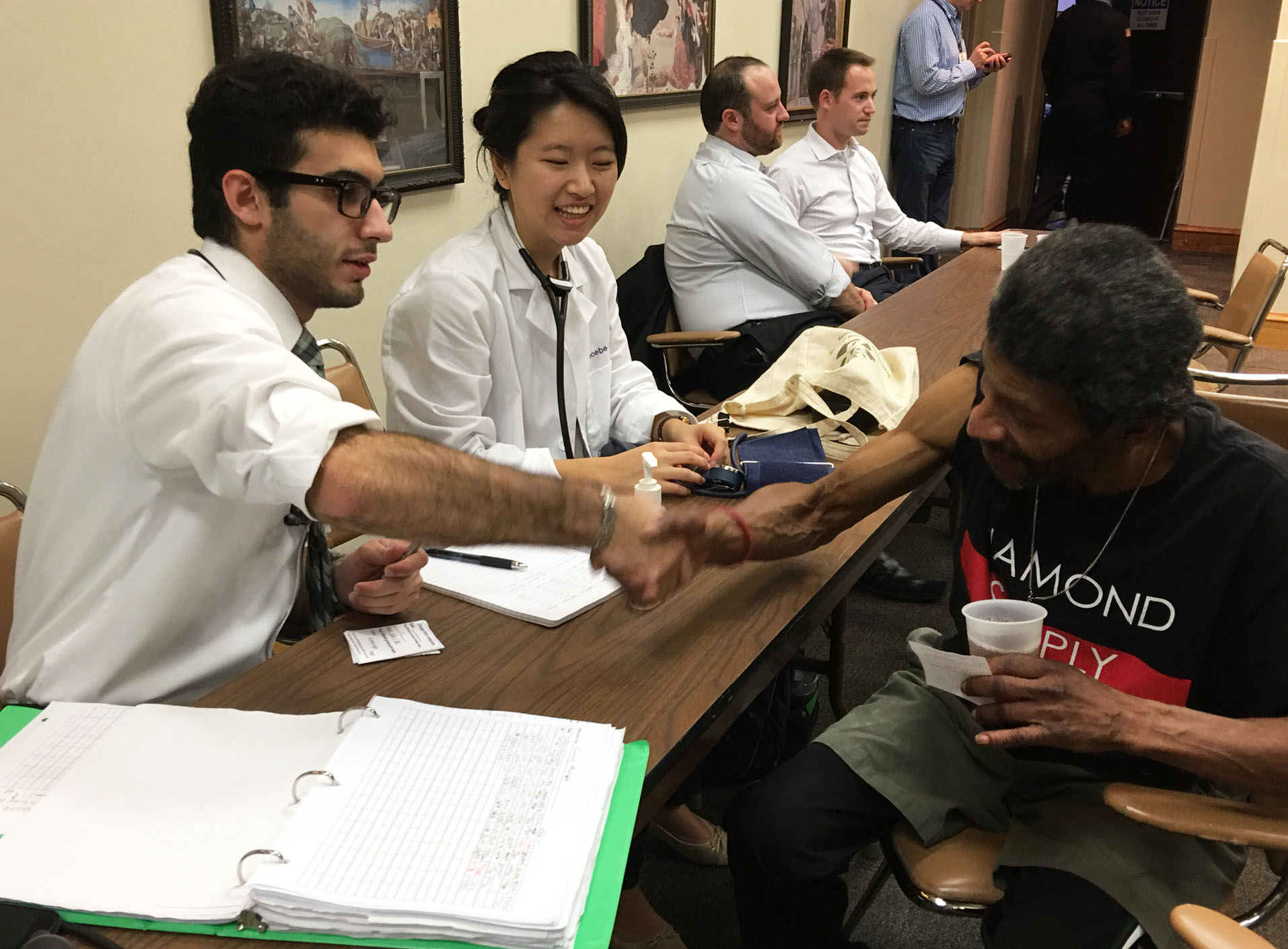 But what happens when one of those serving someone in need becomes the one in need? Meet the intelligent, talented, and extremely resilient Quinniya Hearn.

A Home for her Birthday

CHIRP: When did you graduate and how did CHI come into the picture? 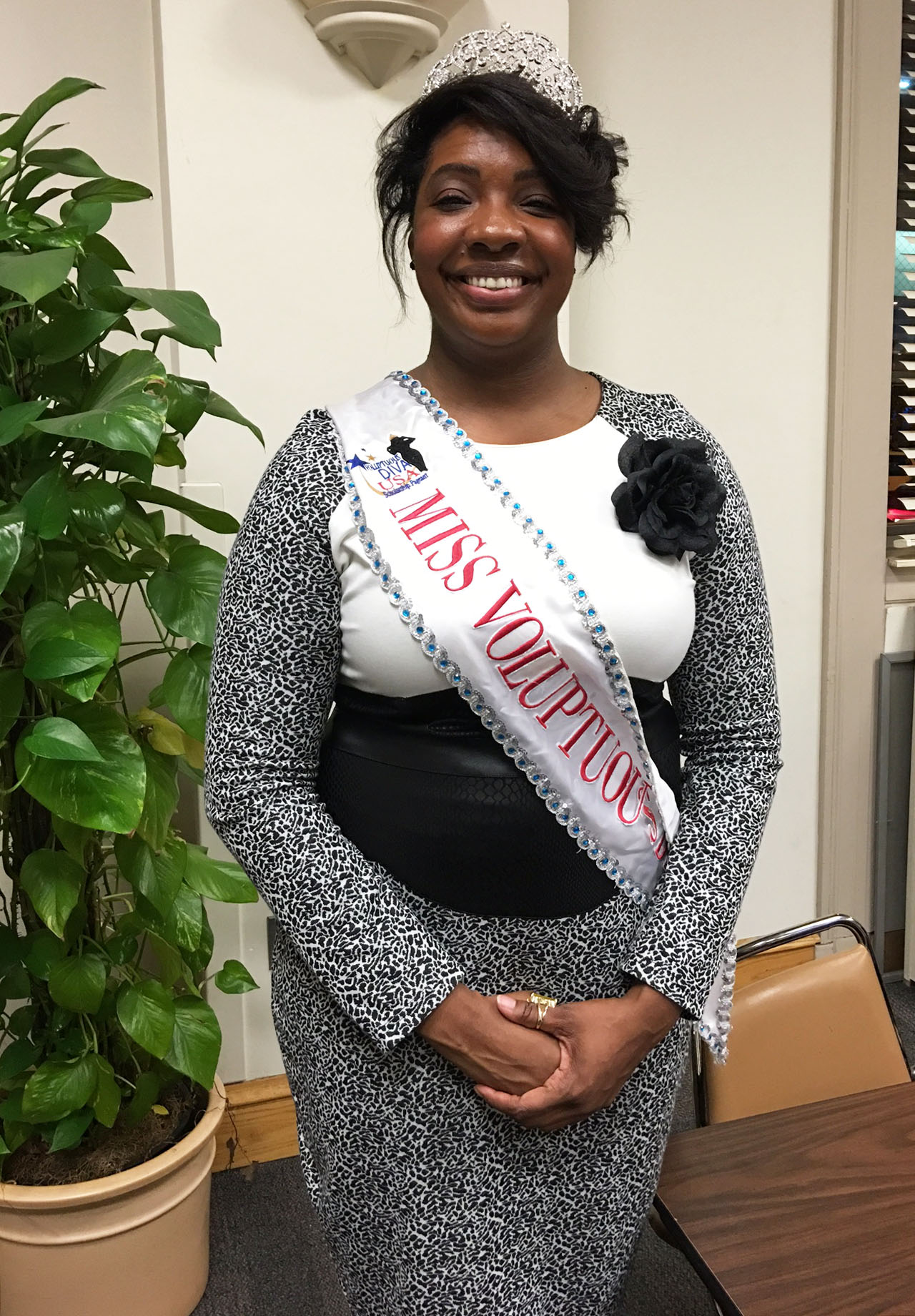 Hearn: I completed my MSW Degree from Loyola University Chicago in 2013. I was an intern at CHI from 8/12-05/13. This was my first internship. I wasn't working at this time. I was fighting for my unemployment and ended up homeless in 10/12. As an intern, I was responsible  for finding resources for the dinner guest to help them to overcome obstacles pertaining to,homelessness.

Ironically, I ended up using some the same services to help me survive. I came to CHI on Wednesday evenings and did outside work related to the internship. Jackie and Marge, the Intern Supervisor were aware of my challenges. They supported me through the dark times in my life. There were times when I wanted to give up and bury my head. But I always had drive and ambition!  I hope, faith , prayer and my daughter Phallyn, who was the ultimate  reason why I didn't give up.

CHIRP: What was it like moving in your new place after everything you'd been through?

Hearn: I saved my own money and qualified for Homeless prevention funds through Heartland alliance. Heart Alliance paid my security deposit and I paid my first month's rent. I applied for an apartment paying market rent. It was a new development at 47th so Cottage, Shops and Lofts. The space was small but modern. I was approved for housing. They anticipated a move date for 6/1, then 7/1, then to 8/21. I was devastated and I grew worried . My exit date from the shelter was 7/1 with no room for an extension because I was considered a high functioning suvivor.

Princeton Park Homes allowed me to move in on 7/1. I was supposed to have been on my job and year but I explained my situation and was granted mercy. I was overwhelmed when I inserted my keys to unlock my doors. Tears of joy fell down my face as I walked the floors of my place. I held my baby tight and said "this is our new home!" We slept on an deflated air mattress. We didn't have batteries to blow it up. We had sheets and comforters to use for padding. We used a Styrofoam cooler for storagefor food because I didn't have a refrigerator until a day or two

CHIRP: Is it often you speak to those who are going (or went) through similar circumstances? Tell me a but about the conversations you have with those inspired by your story.

Hearn: Every chance I get, I speak with someone whose challenged with homelessness. I speak words of encouragement to them. I provide them with resourcesome in hopes,of them regaining strength to take a step towards recovery. I've had the opportunity to speak at schools and shelters. They were receptive to earn me because they could identify with me. They felt that I was one of their own because I could relate to the struggle.

I think the city of Chicago needs more funds for housing the homeles. During my time of homelessness, there was a program called "Rapid Rehousing". I was told that I would be assisted by this program because I had a job. I was told that the shelter would match my savings, and the program would pay my rent for 2 years. The funds were depleted before I moved from the shelter.

CHIRP: What is next for you in this journey, what goals are you working on now?

Hearn: I will continue to strive for excellence, and be the best mother a child could ever need. I'm an aspiring model and actress. I search high and low for opportunities to perfect my craft. I dream of becoming a famous actress one day! I also desire to go back to school to become a news anchor.

Hearn: I competed  in the Miss Voluptuous Diva USA 2015 Scholarship Pageant. It was held on 8/16/15 and was a great experience. The founder, Barbara Ellzey believed in inspiring , empowering and encouraging women despite their size and opposition. My self esteem and confidence was strengthed. It was like i transformed to a new person. The pageant birthed my dreams. I'm currently modeling for plus size women at M.H.OD., Michelle House of Design. Also, I've been casted in "Mya and Me", a Dixon Entertainment Production, up in March 6-8, 2016.

Listen to an interview with Jacqueline Hayes and WGN's Rick Kogan and visit the Chicago Help Initiative for more information on programs and partners.

Previous entry: An Interview With Spot and Joe Carducci of SST Records