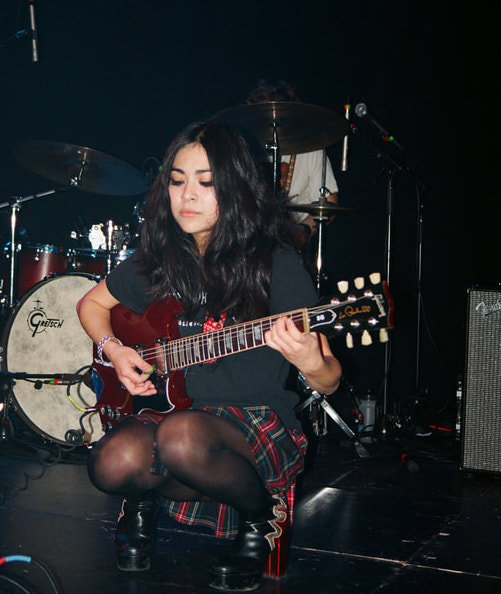 Cold Beaches played their first post-COVID-hiatus show last month at Schubas, with an entrance Sophia Nadia had been ideating for months. “All the bands were so good,” Nadia said. “I felt kind of fulfilled for the first time in a really long time. My ego has been significantly and efficiently stroked.”

Cold Beaches launched their set with “Ride,” the opening track from Drifter. "It sets the tone for a fun time,” Nadia said. “Reno Cruz, which is an amazing artist, they played this beautiful, kind of like sweet ballad, soft set. And I was telling my bandmates watching it, like I was about to cry, it was so beautiful, and slow and soft. And then I was like, ‘Wow, the vibes in here are going to change so significantly when we go on.’” “Ride” begins with open string guitar-tuning with underlying amp buzz, then climbs into a fast-paced rocker, catching a live audience by surprise at the top of a set.

Nadia thought extensively about how she wanted her return to the stage to look, including her own headpiece—a headband with a slew of zip-ties attached, all painted silver. “It looks like a halo crown, just like a bunch of silver spikes,” she said.

The rest of Cold Beaches’ band members wore all black with silver chains for the Schubas show. The show marks the first time songs from “Drifter,” originally released in July of 2020, were able to be heard in a live venue, nearly a year later.

Even before the COVID delay, the album saw months of release setbacks going as far back as winter of 2019. Pushed to April of 2020, and later July, the album sat ready for release for months. Then in July, Nadia actually wanted to delay the release again amid the protests, activism and fallout from the George Floyd case, but contractually, the album had to drop. “I just wanted to give space for people to speak about important issues. And I really didn't think it was the time, amongst all of this tragedy and loss, to be like, ‘Listen to my band! Check it out! Look at me!’”

With the band unable to rehearse over pandemic, once the Schubas show was booked, they did, “Hyper-tons of rehearsals,” for about a month, she said.

Nadia plans for her next album to be a synth-pop release, as piano is her first musical love. She said fears about working multiple synth lines into live shows previously gave her trepidation about featuring them prominently in her music. “Piano is my first instrument. I love synth. It’s hard to execute that properly live, but I'm feeling brave...Guitars just, it started that way just because I thought to be in a rock band when I was 14 that it had to be the guitar,” she added.

Cold Beaches formed when Nadia was 17. After eschewing college to tour with a prior band that broke up, she met frontman Connor Wood of 3 Legged Dog in Richmond, Va., who offered to play drums on her new Cold Beachesproject. While the backing lineup has evolved over time, Nadia has always been the core of the project, dictating its musical direction. “Really, it's kind of always been just, I'm in my underwear in my room doing some form of tomfoolery on the piano or the guitar. The only changes that have happened have been more my personal development and curiosity as a musician and as a writer,” Nadia reflected.

While Cold Beaches may have started in Virginia, it’s now a Chicago-based band. But originally, Nadia had intended to take the project to New York City. “Everybody thinks ‘New York’ in Richmond, and then they don't last six months, and they move back, sounds a little daunting,” Nadia confessed.

But one day, she happened to meet Chicago’s own Twin Peaks while on tour with Cold Beaches in Philadelphia. “I actually ran into some Chicago musicians while I was on tour in Philadelphia through this weird circumstance where my credit card got canceled,” she said. “I was trying to book a hotel at the same hotel they were staying at so we could hang out. And they were like, ‘Oh no, I'll front you.’ So they helped me get a room. And then one of their band members got locked out of their room and had to crash on the couch of my room.” After a lengthy late-night conversation with Twin Peaks’ Colin Croom, she started to think Chicago would be a better destination.

Besides the synth-pop venture, Nadia said she also hopes to score video games, after a lifelong love of them stemming back to high school. “I’ve always loved video games,” she said. “I think it sparked another form of curiosity with my creativity to see how these developers could create worlds and stories and dialogue. And on top of that, they have incredible musicians just orchestrating beautiful compositions.”

Nadia said the pandemic gave her the chance to return to her love of video games, which touring and recording had sidelined since high school. She said the idea of writing music with a purpose beyond self-focus would be interesting. “I would love nothing more than to be able to score something like a video game or a movie, where instead of it being about me, me, me, it would be like, ‘This is about this. Can you make a song for when this happens?’” Nadia is even dabbling in video game creation from the ground up, learning code to create a simple 2-D game. “I want to score it and write some poetry, some dialogue, create a little experience,” she said. “It’s not going to be a full-fledged thing, but it would be nice to present my music in a new way.”

CLICK HERE to listen to the full interview on the CHIRP Podcast.