Ziggy Stardust, the Thin White Duke, the Goblin King, or just Bowie –whatever identity he claimed, he shared with us and we loved him even more for it. Rock’s first champion of the weirdos, David Bowie’s art was rapturous from beginning to end. While he has now floated far from the physical world, his legacy – when stripped of the glitter, costumes, and alter-egos, is most simply and beautifully all about being true to oneself.

The very first record I played on my turntable was The Rise and Fall of Ziggy Stardust and the Spiders from Mars. I was 16 and it was a gift from my cousin, Paul. As soon as I dropped the needle on “Five Years,” it was kismet. Sure, I had heard “Changes” and the ultimate anthem, “Rebel, Rebel” (which is forever tattooed on my left arm), but I had never sat and listened to a full, Bowie record; experiencing the entire spectrum of the humanity as he, as his character, had lived and died.

The adoration took over my life. By my freshman year of college, I had painted a lightning bolt over my right eye on multiple occasions before going out. It was a patch I had earned, a badge pledging my eternal loyalty to the coolest club there ever was. I analyzed “Space Oddity” for an English project, I wrote about Bowie’s refusal of gender-norms and his role in the sexual revolution, both as a pleasure-seeker and the anti-alpha male in my very first Gender & Women’s Studies class. Instead of going bar-hopping on my 21st birthday, I dragged my friends to the midnight showing of Jim Henson’s Labyrinth at the Music Box.  Every era exposed something different, more intriguing than the last. He remained ten steps ahead of everyone else and more relevant and relatable than any artist of my generation.

David Bowie, his words, and his art came into my life at a time when I was trying to find my own identity –not only as an awkward, teenage girl who didn’t fit the standard when it came to looks or interests, but as a writer whose shyness was almost immobilizing on the outside, but was bursting on the inside. Before Bowie, I thought the person I was every day was wrong. The girl I saw in the mirror didn’t fit in with everyone else, the thoughts and dreams I had were silly or unrealistic because they didn’t involve a large, financial bottom-line. I often felt isolated rather than relish in being an individual, or one-of-a-kind. David Bowie made me feel like I was one-of-a-kind and that I wasn’t alone at all.

Personal discovery and self-evolution are endless, as they should be. Bowie was evolving until the end, the love he provided through his art the only constant. He gave us the last weeks of his life with Blackstar and died knowing the only person he had left to answer to was himself and his vision.

When I learned of his passing, I felt like I had lost the closest friend I had that I never really knew. I thought, If only I had gotten to see him live, among countless other desires that would’ve involved time-travel. But while it’s OK to be sad and shed tears over someone you never met, the fact that I –and those older and younger than me –were ever even on the same planet as such an original, fearless, honest, raw, and genuine artist is something that should be celebrated. David Bowie’s death came as a shock to many of us, maybe because it was just his birthday last Friday or because it’s hard to believe that such a shape-shifter wasn’t actually immortal. Yet, what he did in life will continue to change and inspire the lives of others for many years to come. He will continue to make any who’s different feel like one-of-a-kind instead of an outsider. 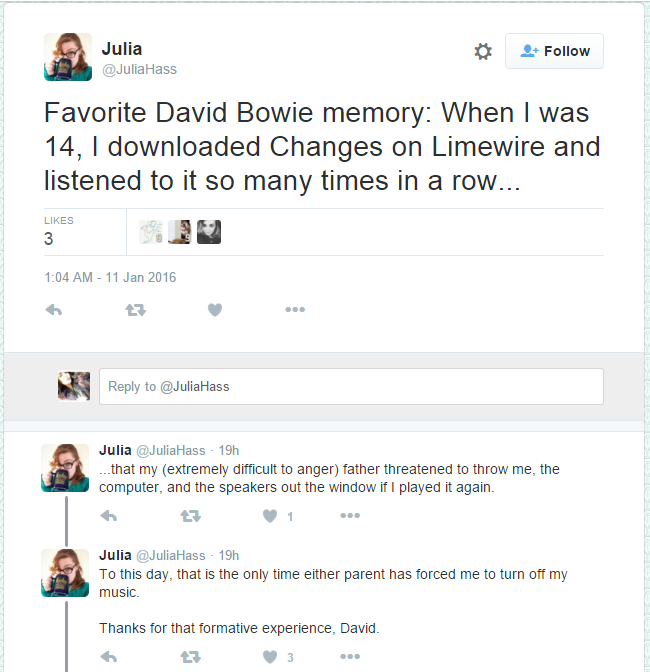