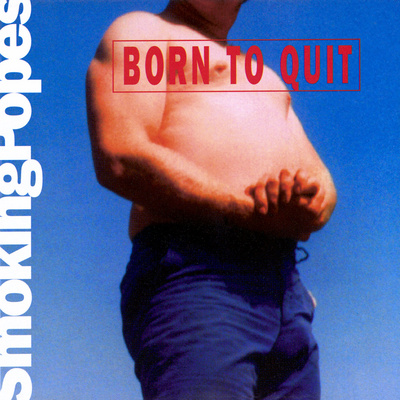 Before our wedding, my wife and I went through our record collections to find songs that would fit not only on our wedding mix CD (which we gave out as a gift to our guests), but also songs that represent us as a couple. I somehow kept overlooking the Smoking Popes and their pop gems. At the 11th hour, it dawned on both of us that Mrs. You and Me would be a perfect song that would sit perfectly amongst the other songs we selected.

I hadn’t listened to Born to Quit in quite a while, so blowing the dust off and dropping the needle on this classic was due. When this album came out, I have to admit, I wasn’t floored or impressed. I didn’t think it was nearly as good as Get Fired, plus finding out that the Popes had signed to a major and that one of their songs appeared in the credits of “Clueless,” I almost immediately considered them “sellouts.” (totally ignoring the fact that another favorite of the era, the Mighty Mighty Bosstones were actually IN the movie). It was an unprecedented front on underground music and a travesty to their “real fans,” which I considered myself to be. Of course, I now see the ass-backwards nature of that sort of thought pattern and the Popes are once again on my list of “best bands to come out of Chicago.”

If you’re not familiar with the Smoking Popes, here’s a crash course. They’re pop punk, but imagine a pop punk band fronted by Morrissey. It’s like watching a band whose singer has spent far more time waxing romantic to old Smiths LP’s and big band jazz records while watching black and white movies from the “golden age” of cinema rather than heavily spinning the first three Ramones albums and cuffing his jeans. The music is filled with familiar pop hooks, played in fresh and beautiful ways, layered with chromatic guitar solos and lyrics cleverly lamenting lost love and heartbreak.

Borrowing influence from the Replacements, Husker Du and various punk bands who were too pop oriented to sit comfortably in the 80’s hardcore scene, they crafted their sound in the western and northwestern suburban scene of the early 90’s. They played almost exclusively at VFW halls, McGregor’s, YMCA’s and friends basements, gaining attention nationally by opening for bands like pre-Dookie era Green Day, Screeching Weasel, appearing on the Achtung! Chicago Zwei compilation and eventually a hefty touring regiment.

It’s hard to say if the Popes would have broken through the way they did had they not lived in the Chicago area in the 90’s, because there was a hefty amount of national attention focused on the city and surrounding suburbs. All the majors had their eyes on our city looking for a Screeching Weasel without the DIY punk aesthetic Ben and company held. Vulturing everyone from the Smoking Popes and Fig Dish to Local H and Triple Fast Action, all of which were unable to break through to national radio adoration.

Listening back to this album, it doesn’t sound the slightest bit dated and could have very well been recorded last week. The melodies and hooks are timeless and the lyrics are just as relevant to broken hearts today as they were in 1994.

Next entry: Midwestern Housewife: Welcome To The Party

Previous entry: Bringing It All Back Home