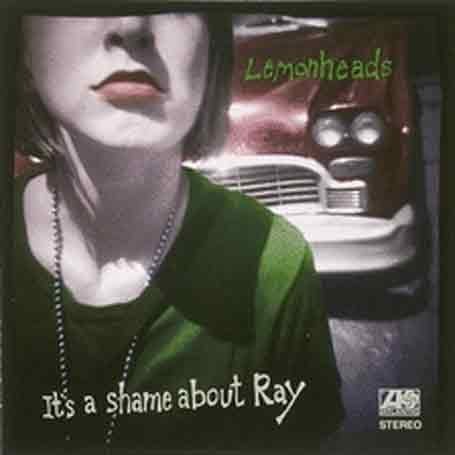 I remember 1990 pretty well. I was just really getting into punk rock and all of it’s connected genres and an older friend of mine loaned me his copy of “Hate Your Friends” by the Lemonheads. With the exception of their cover of “Amazing Grace,” that record was pretty solid. I dubbed the cassette and it went into the archives. A few years later, I was watching 120 Minutes on MTV and this pop-punk cover of the Simon and Garfunkel song, “Mrs. Robinson” was playing. I missed the opening credits, but was really intrigued, because it was really good. The end credits came on and it was the Lemonheads. I wasn’t sure if it was the same Lemonheads that my friend Dave had shown me, but they definitely were a band worth looking into.

The next time I was at the record store, I was looking through the various stacks of CDs and I found “It’s a Shame About Ray.” I passed on it, because it didn’t have the “Mrs. Robinson” cover and I was still unclear as to whether this was the same band as the “Hate Your Friends” Lemonheads. A few weeks later, I was sitting shotgun in my mom’s car, driving down Oakton through Skokie, listening to XRT and the title track, “It’s a Shame About Ray” came on. It was such a great song; so much so that my ears perked up and I stopped talking mid sentence. Whatever I was blathering about was forgotten and my focus had been shifted to this amazing pop song. When the DJ came on, he said “that was Boston natives, the Lemonheads.” I asked my mom if we could make detour to the record store on Dempster and Crawford. She agreed and I ran in and bought the album. At this point, the “Mrs. Robinson” cover was tacked on to improve sales and I won at record shopping that day.

Recently, I dropped this Alt-rock gem onto my iPod and was very quickly reminded of sitting in the music wing of my high school on a Friday afternoon, playing “Confetti” on my friend’s acoustic guitar. Some girl asked me what I was playing and I told her “it’s a Lemonheads song.” She told me it was pretty and walked away. Those were the days of fingerless knit gloves and nail polish. Screeching Weasel shirts and a-symetrical hair cuts. Army cargo pants and Dr. Martens. Fall of 1992 was a very good time. Change was in the air and a new era was beginning. A decade where music would lead a cultural explosion that would change the way the mainstream listened to music, watched movies and television, looked at politics; pretty much everything changed that year.

This particular record was a big departure for me. Up until this point, I rarely deviated from music that was fast and loud or mopey and depressing. It was sort of a meeting of many underground genres that I loved in one package. You had Evan Dando, composer of one of the best Boston punk records of all times (the previously mentioned “Hate Your Friends”) and Juliana Hatfield from the Blake Babies, who were one of my favorite Boston pop bands. This album really solidified my crush on Juliana Hatfield and introduced me to the music of Gram Parsons.

I was reading a lot of music press articles on the Lemonheads and Uncle Tupelo and most of the articles sited Gram Parsons as a key influence on both of these bands. On a very snowy afternoon in December of 1992, I slid down Halsted avenue to Evil Clown records, where I hunted down a Gram Parsons record to listen to at their listening station and gave it a spin. I wasn’t too into it at first, because it reminded me of everything I hated about 70’s rock, so I didn’t buy it. I probably bought a Pigface CD instead. Several years later, I re-explored Gram Parsons and fell in love with his song writing. I owe this to the Lemonheads and Uncle Tupelo.

This record is glorious stroll down memory lane, but it still seems to hold up over the years. It sounds dated, but not in an offensive or cringe-worthy way. It feels nostalgic without making me feel old. It’s comfortable. This is a record for snow days and rainy autumn afternoons spent organizing record collections or cleaning an apartment. Maybe lying on your bed reading zines or watching the leaves fall off of trees.

I really wish I could have taken a “mental health day” today and listened to the Lemonheads all day, but these things can’t always happen when you want them too. Please give this a spin or three next time you’re cleaning your apartment, snowed in or spending a lazy Saturday afternoon reading. It really is musical comfort food.

Next entry: Grrrl on Grrrl: Goldie & The Gingerbreads