Bobby Evers writesRediscovering Our Record Collections: Harvey Danger’s “Where Have All the Merrymakers Gone?” 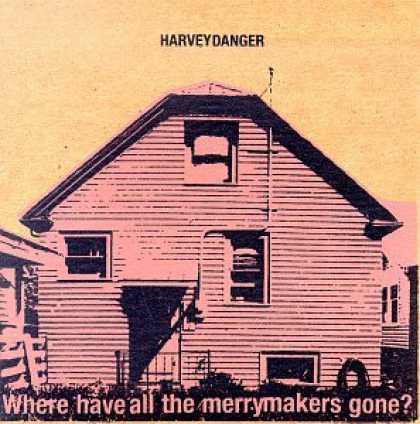 My sister went to California and informed me of a new song I absolutely had to hear. But because we had DirecTV with MTV2 back at Mom and Dad’s, I’d already heard it. I didn’t get the record right away; I borrowed it from a friend and listened to it over and over again before buying it myself. Thankfully I was able to exchange an Everclear CD at K-Mart and traded it for this disc.

There is something quintessentially late ‘90s about WHATMG? The focus is on the vocals, which are kind of nerdy. There is feedback and distortion. There is a hidden track of yelling. And it was such an important record for my life at the time. The songs were alternative to alternative. They weren’t punk or grunge. They were just fast rock-pop songs with clever lyrics dripping with irony and wit and peppered with allusions to literature and pop culture.

And they were dark. And pained. There are so many heartbreaks associated with this album for me. I can remember being in my room and listening to this album with my CD player turned up to 5 (which was loud) and drawing the faces of sad characters and writing the worst imaginable poetry. And when Sean Nelson sings “I forget what my friends look like and they forget why they like me, but that’s old hat, I’m so happy. How do you write about that?” I took that as a reason to be hopeful.

And there was a lot to be hopeful for for Harvey Danger, though their fate would go the way of many major label darlings. The Flagpole Sitta balloon that was getting bigger and bigger didn’t so much as burst as deflate. Mergers and acquisitions postponed the release of their second album (which is also a terribly good album in its own right, truth be told!) and basically everyone forgot they existed as anything but the one hit wonder of Flagpole Sitta. I didn’t even know it was out until something like four years later and at that point I was in college and downloaded it off Soulseek.

After a long hiatus and another album, available for download for a suggested donation on their Web site (something like two years before Radiohead did the exact same thing and were hailed as pioneers), Harvey Danger did a few farewell tours, the last of which I was able to attend, at Schuba’s in August of 2009. I was able to meet Sean Nelson, and hear all the songs that had meant so much to me over the years. Probably the best likely ending to an otherwise pockmarked history.

Re-listening to the album, WHATMG? is still a lot of fun and stands the test of time. It’s clear to see how they likely would have been much more successful as a college radio indie rock band a la Death Cab For Cutie (friends and label mates!) than a TRL Green Day clone, or some other manifestation.