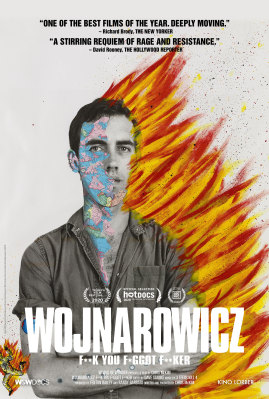 I consider myself a proficient scholar when it comes to LGBTQ history: I've learned about the early pioneers, the Stonewall Riots, and the continuing struggles that still linger. But if you had ever name dropped David Wojnarowicz in a related conversation, I would have reacted like a deer in the headlights, and looked a fool.

But a fool, I am no longer. The creators behind RuPaul's Drag Race have produced a fiery and fearless portrait of the multimedia artist and AIDS activist, which they have appropriately titled WOJNAROWICZ: F**K YOU F*GGOT F**KER.

With an in-your-face, scandalous title like that, you get an idea of what you're in for. Stitched and sewn together with archived footage, photos, and answering machine tape recordings from the artist's personal archives, director Chris McKim crafts an absorbing collage that sucks you into the gritty cesspool of Wojnarowicz's early years of hustling on the streets of Hell's Kitchen, then spits you out in the aftermath of a post-AIDS gentrified world, where Wojnarowicz's viscerally breathtaking body of work continues to be rediscovered.

This isn't just a "greatest hits" road trip down memory lane either. While this documentary showcases some of Wojnarowicz's greatest artistic triumphs (including the piece to which this documentary bears its name), you're also treated to the scuzzy art scene of the late seventies, where Wojnarowicz flourished in the small art scene of the East Village, making militaristic installation pieces made out of stenciled images.

From there, you witness his evolution into the decade of '80s excess, when Wall Street art collectors commissioned for pieces which Wojnarowicz believed stymied his creativity.

You learn about Wojnarowicz's personal relationships as well; from the tensions between his 3 Teens Kill 4 bandmates, to his collaborative (as well as intimate) relationship with photographer Peter Hujar. Much of these moments are discussed in intimate recollections from those who knew Wojnarowicz, from former bandmates, filmmaker Richard Kern, and author Fran Lebowitz. You also hear from Wojnarowicz's siblings, whom maintained a strained, yet supportive relationship up to a certain point.

That point is where the documentary really stands out: during the late '80s when the AIDS epidemic was at its apex and still politically ignored. As someone who refused to be ignored, Wojnarowicz (who succumbed to the disease in 1992) became an AIDS activist, and is responsible for the iconic jacket which became a battle cry: "IF I DIE OF AIDS - FORGET BURIAL - JUST DROP MY BODY ON THE STEPS OF THE FDA."

As a queercentric artist, his works became a hot button issue during this time for many conservative politicians, who tried aimlessly to get--along with the likes of visionary artists Robert Mapplethorpe and Keith Haring--such pieces censored and removed from museums. While all three men are no longer with us, their works still remain available to the public.

It makes sense as to why David Wojnarowicz was not a name I was familiar with. While the works of Mapplethorpe and Haring have remained controversial, they've also become commercial, continually celebrated and imitated in pop culture. Wojnarowicz was not someone who embraced success or wanted worldwide acclaim, he just wanted to make art. "When an artist perceives what he does as a product, he's in trouble," he once said.

This documentary not only highlights the importance of his artwork, but also emphasizes his trailblazing efforts in the LGBTQ community. After seeing this documentary, I will no longer be ignorant of his name. Neither will you.