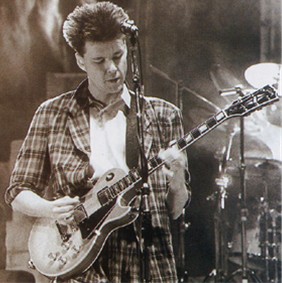 The legendary BBC DJ John Peel once referred to this man as “Britain’s answer to Jimi Hendrix.” I don’t know how many people shared that opinion, but there is no doubt that Stuart Adamson could do so amazing things on his guitar. Adamson got his start in the post-punk band Skids, playing fantastic songs such as “Working For the Yankee Dollar”. Once Skids ran its course, Adamson really hit the big time, fronting the powerful Big Country. Big Country may have been a victim of “amazing first single syndrome,” as “In a Big Country” was so powerful, it was tough for the band to match. But Adamson and crew put out some fine records and he continued to grow as a guitarist (and, of course, he was famous for making his guitar sound like bagpipes). Sadly, Adamson passed away in 2011. In honor of Adamson on his birthday, please grab your iPod or MP3 player, hit shuffle and share the first 10 songs that come up.

Next entry: CHIRP Night at The Whistler is Back on April 14th with The Iceberg and Cassettes on Tape!

Previous entry: Join Us For the 12th Annual CHIRP Record Fair and Other Delights on Saturday April 12th!