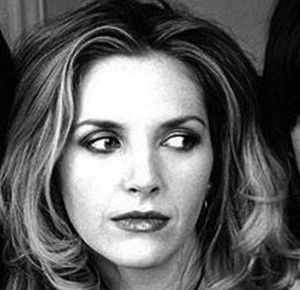 Sarah Cracknell exudes class and elegance, in a low key manner. Moreover, she is seemingly ageless. The Saint Etienne frontwoman is the perfect fit for the urbane dance and pop music her bandmates Bob Stanley and Pete Wiggs have put together for over two decades, though they tried out some other singers before realizing how perfect she was. She emphasizes interpretation of lyrics and engagement in the material, exuding warmth and a sophistication that is down-to-earth rather than elitist. Let’s celebrate her birthday in style, by grabbing your iPod or MP3 player, hitting shuffle, and sharing the first 10 songs that come up.

The Go-Betweens -- I Need Two Heads (1978-1990): This Australian act fascinates me, because they are a post-punk band who went away from dense artiness or big rock sounds, instead delving more into a large Velvet Underground jones to come up with something really distinctive. Earlier in their career, as on this 1980 single, the rhythms have a lot in common with bands like The Cure, while striving for something more accessible melodically. I prefer how they wound up to how they started, but everything they did was compelling.

Steve Wynn -- Slovenian Rhapsody I (Crossing Dragon Bridge): The opening coda from this ambitious solo album from the former frontman of the Dream Syndicate. Wynn whistles over his stately acoustic guitar part before offering some pithy lyrics. This brief track sets the tone for the collection.

Wipers -- Now Is The Time (Over The Edge): This Portland, Oregon band still is now as well known as they should be. Along with bands like Mission Of Burma and The Effigies, they established a specific American post-punk sound which relied on edgy, at time dissonant guitars, and a moodiness consistent with their British counterparts, but a bit more rooted in rock ‘n’ roll. That is, their post-punk was punkier. This is a wonderful moody rock tune, with typically excellent lead guitar work from leader Greg Sage.

The Jimi Hendrix Experience -- Stone Free (Are You Experienced?): Another classic tune, from an album that still gets its fair share of classic rock airplay. One thing about Jimi’s music is that while he was working in the same blues based framework as many of his contemporaries, there was something different about his music. It doesn’t sound like Led Zeppelin or Cream, and it’s not just his guitar playing, but the whole dynamic of this wonderful trio. I’d never confuse this band’s sound with anyone else, even without hearing vocals or a guitar solo.

The Cardigans -- Happy Meal (Life): A wonderful slice of pop from this Swedish band’s second album. While the music was band based, in some respects, the early Cardigans stuff slices and dices ‘60s pop influences in a manner somewhat akin to Pizzicato 5, but not so frantically. This works very well and plays to singer Nina Persson’s strengths.

Christian Scott -- When Marissa Stands Her Ground (Christian Atunde Adjuah): A really nice song from Scott’s terrific 2-disc effort from last year. Scott is adept at melding the sounds of past jazz with certain aspects of modern music (especially in certain rhythms and use of electronic instruments). It’s no wonder that he covered Thom Yorke and has since worked with him. Scott’s approach leads to music that can satisfy free jazz lovers, yet add some more rock and R & B like structure that can make his more challenging material still fairly accessible.

Dwight Yoakam -- Waterfall (3 Pears): This is probably the closest Dwight has come to recording a children’s song. It’s so simple, with the verses simply consisting of Dwight singing the melody over a spare, pulsing rhythm, with a chorus that adds some jangling guitar. While this is a good, not great, song, but it is so different than anything in his catalog, it really stands out.

Gemma Ray -- Tough Love (Lights Out Zoltar!): Gemma Ray doesn’t really fit into the singer-songwriter bag, even though she is both (and a good guitarist too). Instead, she’s an arty pop singer who mixes together a variety of influences in a unique way. This song has a bit of a French ye-ye in it, with an undercurrent of something more in line with Tom Waits or Randy Newman. As you can tell, she’s really hard to pin down.

Minutemen -- Suburban Dialectic (The Politics Of Time): Brief live track from the boys from San Pedro, where they econo jam in kind of a ‘70s hard rock way, in less than a minute.