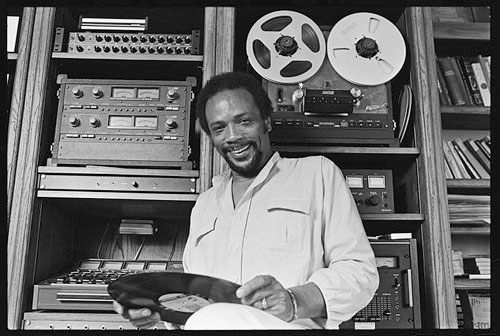 Today is the birthday of a giant in the music industry, Quincy Jones. Jones showed musical aptitude at an early age, getting a scholarship to the forerunner of the Berklee School of Music at 18. He left school a year later to tour in Lionel Hampton’s band. Within a few years, he was producing and arranging. For example, at the age of 22, he was producing Louis Jordan, trying to help the jump blues king adapt to the rock ‘n’ roll age (a project that was artistically successful, although a commercial flop). Having worked with a who’s who of jazz legends, by the time he was 31, he was an executive at Mercury Records. He worked on film scores, made his own records, produced Leslie Gore and did tons of other things. This set the pattern for his career. Make a few records, do some soundtracks and work with major artists such as Frank Sinatra. Of course, his legacy was cemented with his work with Michael Jackson on Thriller. In honor of Mr. Jones, please grab your iPod or MP3 player, hit shuffle and please share the first 10 songs that come up.

Next entry: What CHIRP Means to Me: Jenny Lizak