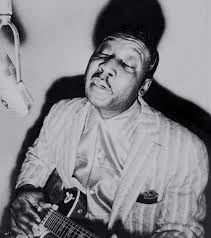 Today is the birthday of a man who made Chicago his home (and later, Westmont) and became one of the giants of the blues. McKinley Morganfield was 30 years old (or so) when he finally made his way from Mississippi to Chicago. He had been to the city before and had done some recordings for Alan Lomax. Muddy was looking to make it here. It took a few years before Muddy (who got the nickname from his grandmother and added the surname later on) finally hooked up with a label, run by the Chess brothers. In 1948, he broke through with the songs “I Can’t Be Satisfied” and “I Feel Like Going Home”. He also became a big live attraction, with an ace band which included bass player Willie Dixon. This led to the creation of blues standards like “I Just Want to Make Love to You”, “Hoochie Coochie Man” and “I’m Ready”. With these songs, Muddy established an electrified version of the Delta blues sound that fit the urban, working class lifestyle of Chicago. These songs were popular at home and influenced future blues rockers on both sides of the Atlantic. Of course, as you probably know, The Rolling Stones took their name from a Muddy Waters song. After a brief dry patch, Muddy revived his career in the ‘70s and kept performing until he passed away in 1983. His legacy lives on both at home and abroad. Let’s celebrate his birthday by grabbing your iPod or MP3 player, hitting shuffle and sharing the first 10 songs that come up.