9:13pm Belle & Sebastian Everything Is Now (Part 2) from How to Solve Our Human Problems Part 3 (Matador) Add to Collection 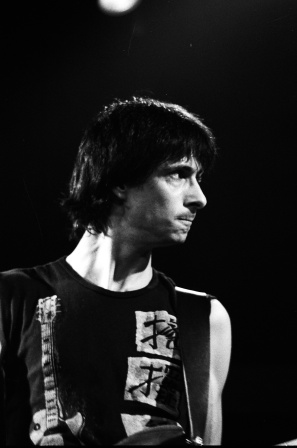 Today, we celebrate a real renaissance man in rock music history, Lenny Kaye. Kaye, first and foremost, was the lead guitarist in The Patti Smith Group, producing her earliest work and playing with her throughout the ‘70s, and then rejoining her in the mid-‘90s. He also played in other bands, including the Jim Carroll Band. Before his professional rocking days, he was a music critic and magazine editor, publishing some of Stephen King’s first work. He later put together the historic double album compilation Nuggets, spurring the first garage rock revival. He is also an accomplished historian and author, writing books about everything from Waylon Jennings to ‘20s and ‘30s crooners. In honor of this fascinating career, please grab your iPod or MP3 player, hit shuffle and share the first 10 songs that comw up.

The Who – Squeeze Box (The Who By Numbers): This novelty song was the only hit single from this underrated mid-‘70s Who album, but I remember it best for its inclusion in an episode of Freaks and Geeks. It’s the song that Lindsay Weir’s parents listen to when trying to decided whether to let their daughter go see The Who.

Uma – New Year’s Day (Fare Well): This was Chris Hickey’s band in the ‘90s. It’s a lot more produced than anything else he’s done, as Don Gehman, John Mellencamp’s producer, mans the board (and ran the label). It’s nice to hear Hickey’s smart folk rock tunes in this sonic setting and it’s characteristically terrific.

Richard Thompson – Walking The Long Miles Home (Mock Tudor): A loping folk tune from a strong Thompson effort. While the focus on Thompson must start with his great, tasteful guitar playing, but his singing has always been great and, as shown by this track, seems to improve as he aged.

Procol Harum – A Whiter Shade of Pale (Greatest Hits): The worldwide smash that led to litigation. The keyboardist sued the writers, wanting a songwriting credit because he came up with the keyboard line. He won! So far, I’m not aware of that decision having too much impact, which was feared. Of course, a great song.

The Godfathers – The Strangest Boy (Birth, School, Work, Death): This album keeps popping up on shuffle. I haven’t listened to it in a long time, as I didn’t remember this track. A moody rocker with some cool twists. For three albums, these guys were fantastic.

Optiganally Yours – Donut (Exclusively Talentmaker!): The band featuring Rob Crow of Pinback that relies heavily on the old Mattel toy the Optigan. The sound of the toy instrument is both synthetic and aged in a cool way. This sounds like Beck meets ‘50s jazz meets something I haven’t figure out yet.

They Might Be Giants – The World’s Address (Lincoln): A dissonant beginning leads to a John Flansburgh tune with a bit of Latin flair and a bad pun in the chorus.

Elvis Costello – Eisenhower Blues (King of America): I think this is the first straight ahead blues rocker Costello had done on this fantastic roots rock album (which was actually attributed to The Costello Show). On this album, he worked both with The Attractions and legendary players like James Burton (who played with Ricky Nelson and that other Elvis).

The Coasters – Run Red Run (The Very Best of The Coasters): A skipping drum beat and runaway piano drive this track about a guy who buys a monkey at a pawn shop. The song incorporates part of the story of Stagger Lee. The Coasters made some really cool records – The Beatles were big fans.