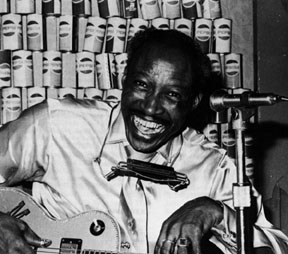 Today, let’s pay tribute to a legendary bluesman, Jimmy Reed. Reed was a key figure in moving blues towards the electric guitar and his laid back sound gave him crossover appeal. Well, that and classic songs like “Bright Lights Big City”. Reed got his start in Chicago and became a success on this city’s Vee Jay label. Reed’s other hits include “Big Boss Man”, “Ain’t That Lovin’ You Baby” and “Baby What You Want Me to Do”, and he has been covered by everyone from Elvis Presley to Neil Young to Grateful Dead to The Rolling Stones. Indeed, the Stones have done a number of Reed tunes. In honor of Mr. Reed, please grab your iPod or MP3 player, hit shuffle, and share the first 10 songs that come up.