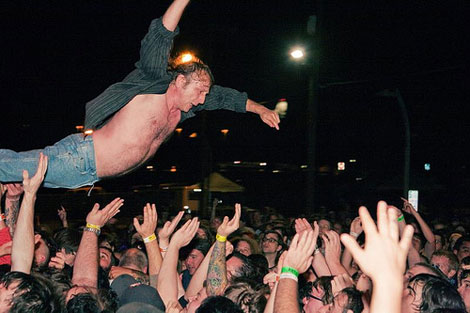 Let’s pay tribute to a leader of a legendary Chicago band. David Yow first came to prominence with the noise rock band Scratch Acid. Scratch Acid quickly built a reputation for its visceral music (one journalist compared them to The Birthday Party) and Yow established himself as one of the most unhinged frontmen anywhere. After Scratch Acid dissolved, Yow and guitarist David Wm. Sims hooked up with Duane Denison to from The Jesus Lizard who came from a similar place, but developed a more sophisticated musical approach, with Yow’s antics contrasting increasing intricate (and somewhat arty) noise. I’ve seen Yow stage dive off the Metro stage with no one to catch him. A July 3 Didjits show at the old Exit found members of the audience wielding protest signs that said F— The Pigs, while Yow came out to introduce the band wearing a Nazi uniform and then gave a speech in convincing German (or something that sounded like German). This same wild man is an accomplished cook, who has worked at restaurants here and in Austin, Texas. Earlier this year, he released a limited edition solo LP of experimental music that was packaged in a concrete monolith. Yow is a true original. Let’s wish him a happy birthday by grabbing your iPod or MP3 player, hitting shuffle and sharing the first 10 songs that come up.