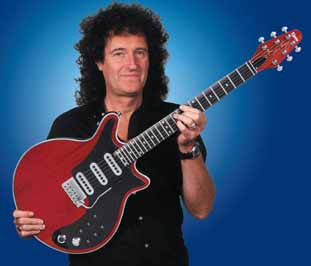 Today let’s give a birthday salute to one of the all-time greatest rock guitarists, Brian May of Queen. The curly haired fretmeister is more than just a guitarist – he has a Ph.D in astrophysics. So it should come as no surprise that not long after his 16th birthday, Brian and dad made the main guitar he has played for almost 50 years, the Red Special. Made primarily out of wood from an 18th Century fireplace with ornate detail, the Mays designed the guitar so it would naturally feedback. This guitar is a large part of May’s distinctive sound, which has so many great Queen songs, including some of his own classic compositions such as “I Want It All”, “Tie Your Mother Down”, “Fat Bottomed Girls” and that sports stadium perennial, “We Will Rock You”. Queen was one of the most musically diverse bands of any era, so in that spirit, grab your iPod or MP3 player, hit shuffle and share the first 10 songs that come up.