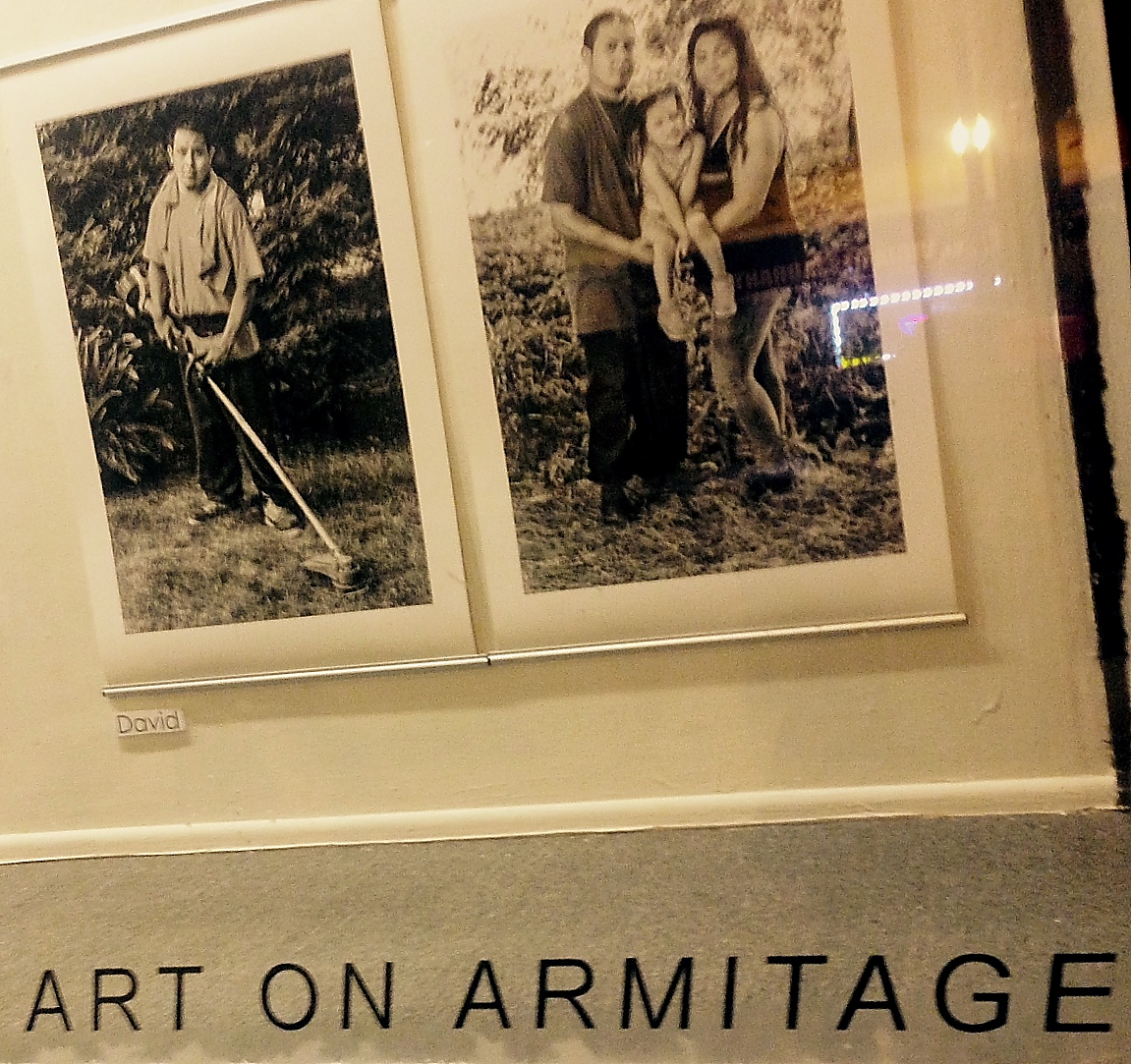 If you take a stroll down Armitage you may suddenly come upon a live performance. Or maybe instead it's a giant six foot tall glittery soldier standing in the window. These are a couple examples of what happens at the window gallery called Art On Armitage.

Since 2003, founder and owner Mary Ellen Croteau’s been using the raised window box to feature local artists exhibitions, installations, and other lively creations. Art On Armitage (4125 W) breaks out of the traditional gallery by making art accessible to the public.

“People in the community love it. We have narratives and live performances that draw people walking by and they’ll stop and just watch. They might talk amongst each other and interpret the art,” Croteau explains.

Through January 2015 Art On Armitage is featuring the photo series At Work/At Home, En el Trabajo/En Casa by Nelson W. Armour. The series focuses on the hard work and identity of latino landscape workers in Highland Park, IL.

“Even though people live in different communities and come from different backgrounds, there are basic things that connect all of us,” Armour said. “In At Work/At Home, En el Trabajo/En Casa, I’m just trying to see the basic elements of our humanity. In photographing these individuals both on the job and at home I hope to present these workers in a new light, not just as individuals who help our communities look good, but as individuals with their own lives.” 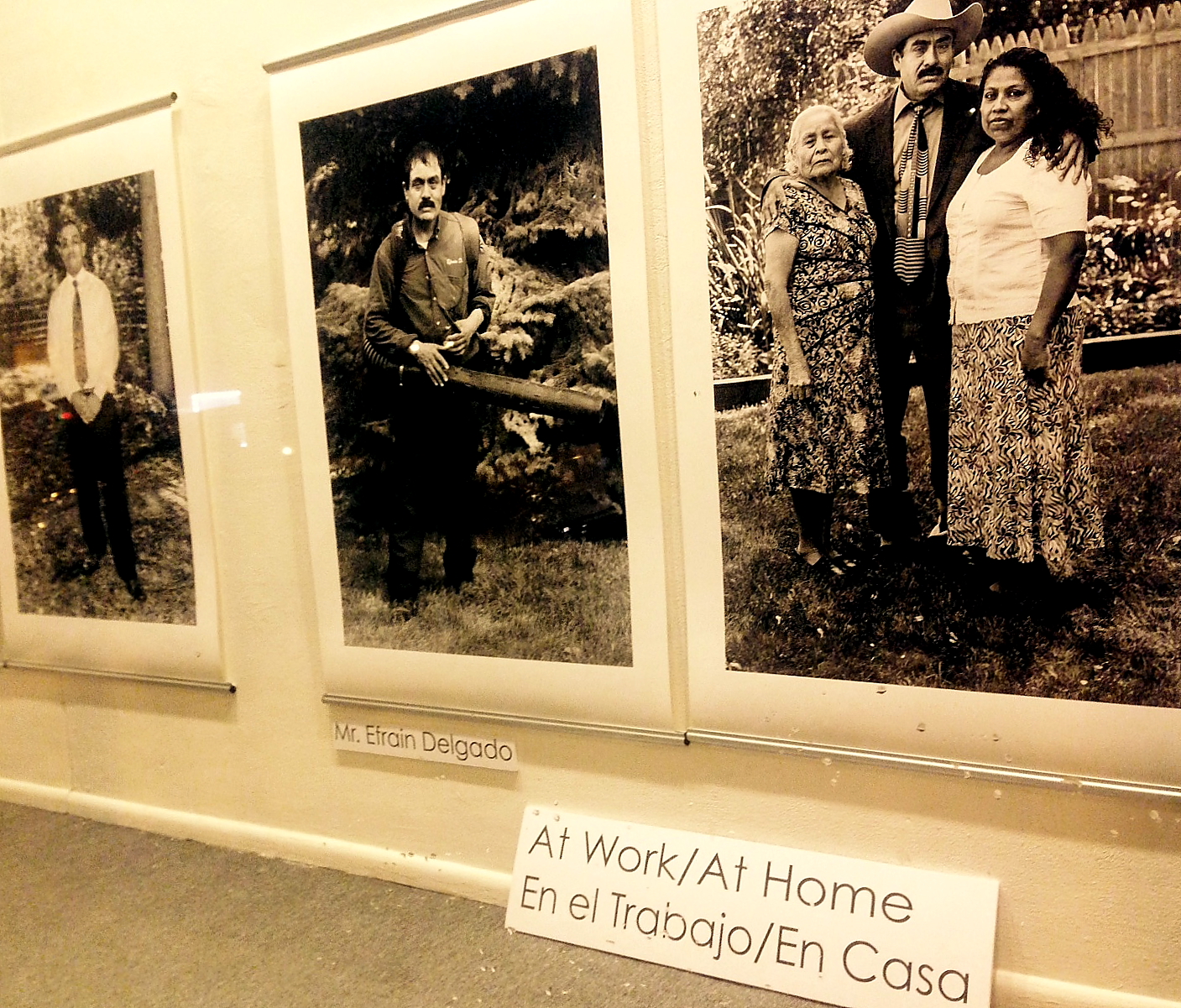 The six-foot-plus glittery soldier sculpture, One Trillion Thirty Billion to One Trillion Four Hundred and Fifteen Billion, by Kristin Abhalter displayed in December 2012. For her it’s funny how one good thing can lead to another.

“Showing at Art On Armitage was a great opportunity and one important factor that inspired me to create my own storefront gallery space called Roman Susan,” Abhalter said. “The experience was extremely enriching and helped me create many connections with artists and community members. I would say meeting Mary Ellen was a real inspiration. To see her establishing a wide network with Chicago artists, and make her own work at the same time, showed me it was possible.”

By the way, Kristin Abhalter’s glittering soldier’s title refers to the United States Military Budget for 2011-2012.

“I love that my work could connect people through contemplation of peace. Since I made the sculpture, I’ve had the opportunity to meet people involved in Iraq Veterans Against War and am inspired by their work to create awareness around veteran re-integration into civilian life,” Abhalter explained. 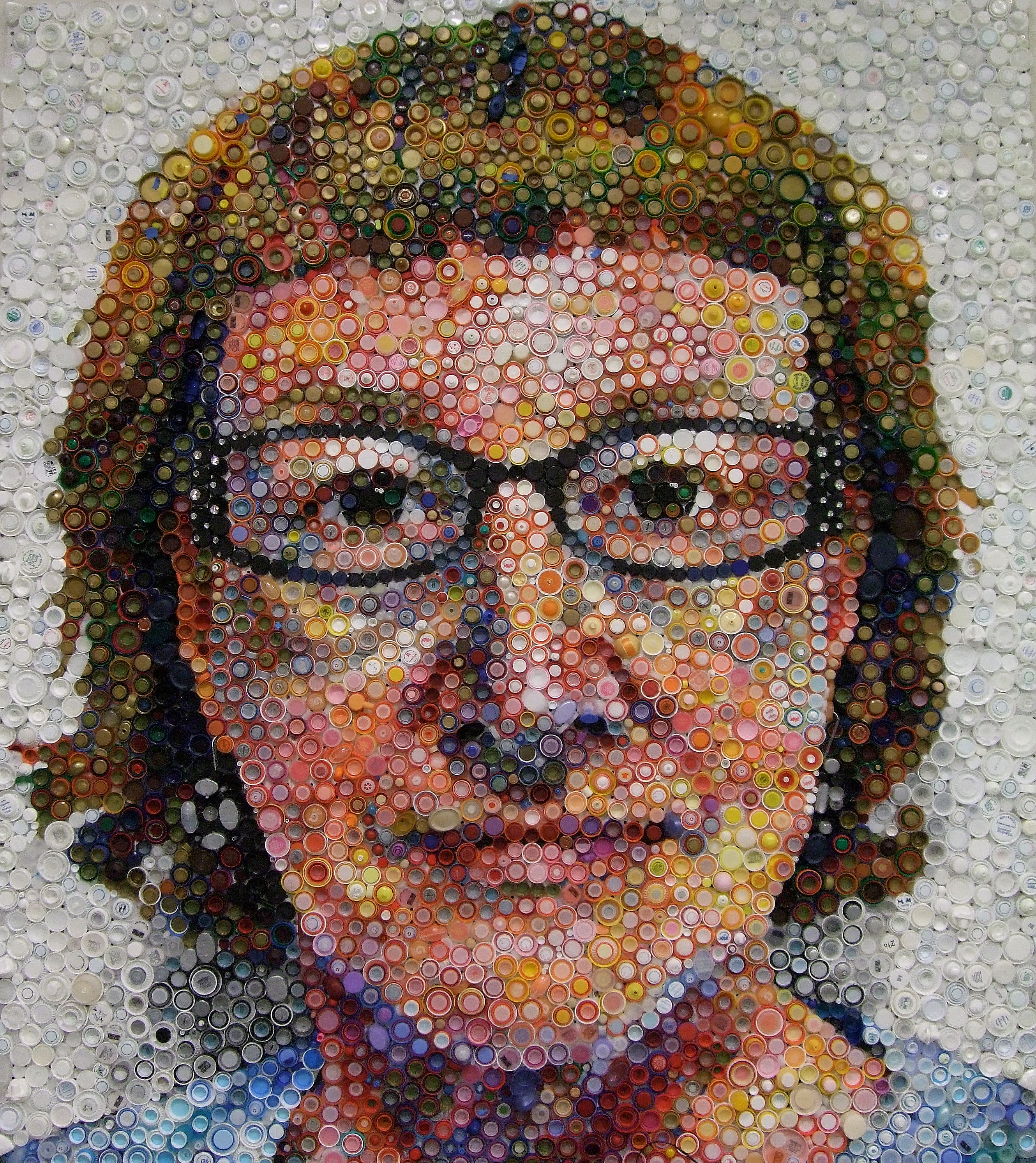 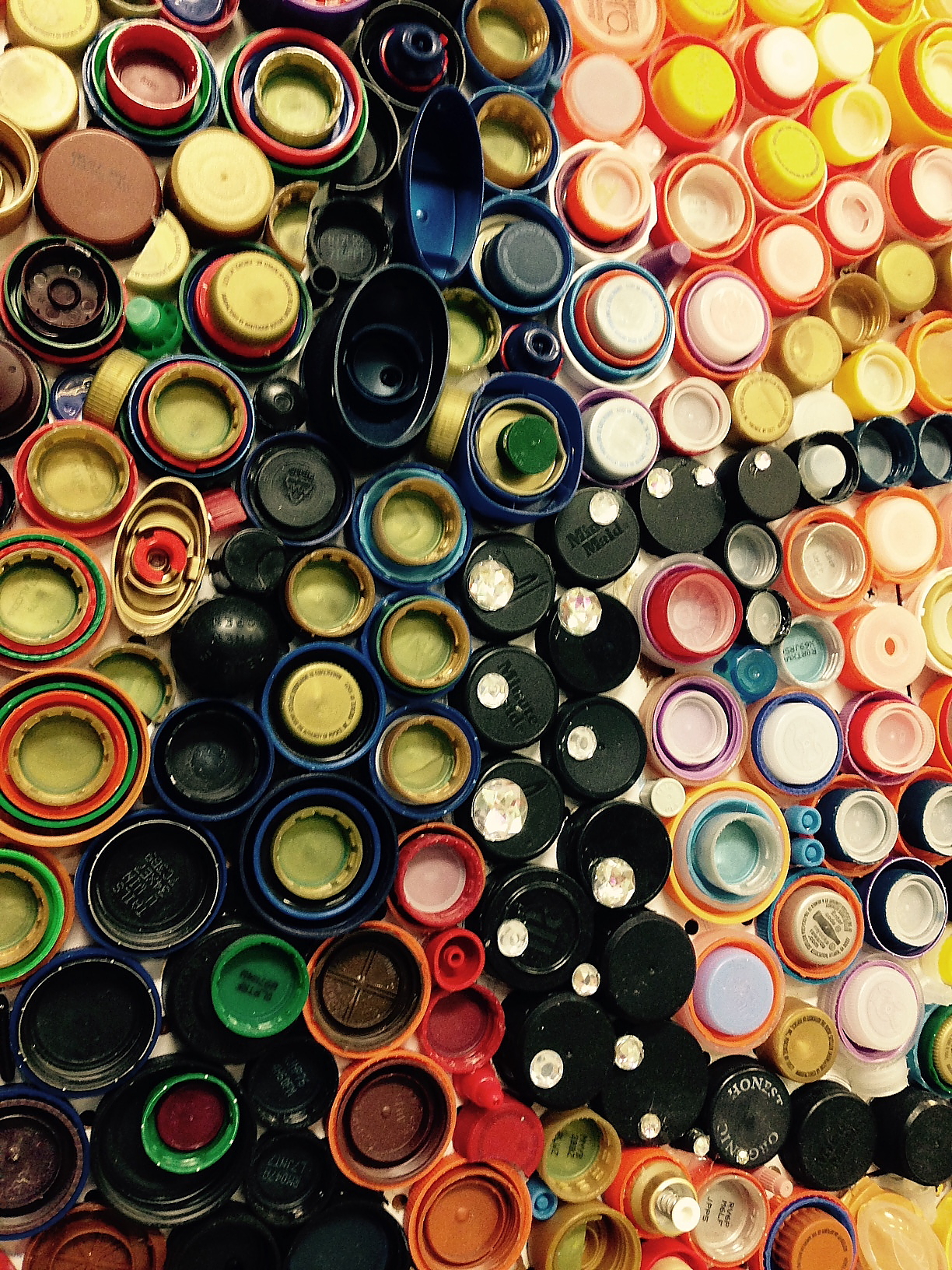 Art On Armitage barely scratches the surface into Mary Ellen Croteau’s creative work. Currently, she’s sculpting with non-recycled plastic waste in an effort to demonstrate the huge amounts of trash we’re consuming and sending into the environment.

On her website, she says, “my work is my voice: a social critique and a visual challenge to all the cultural detritus we are force-fed every day. My art is about looking at things in a slightly different way, and is intended to undermine the status quo with wit and humor.” 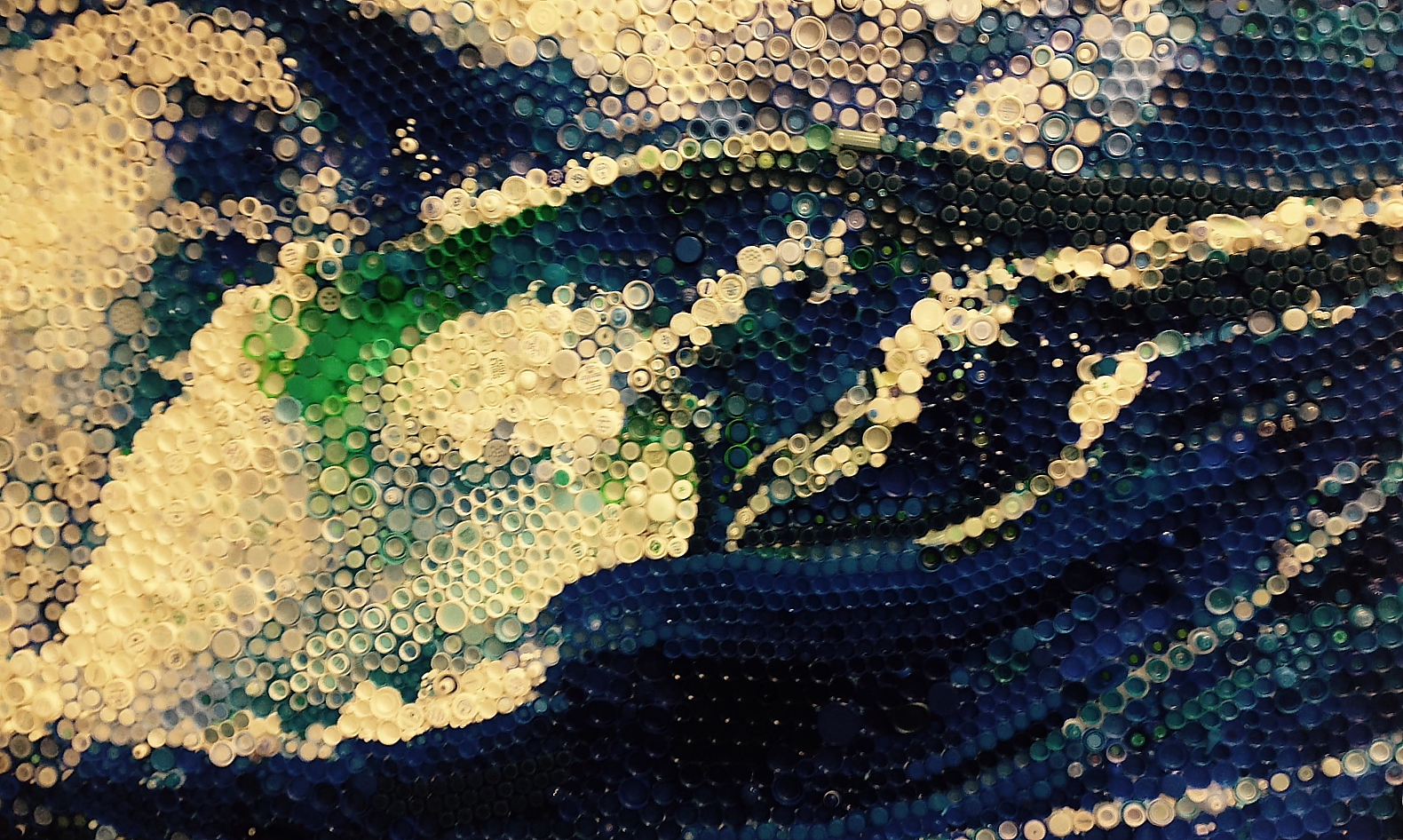 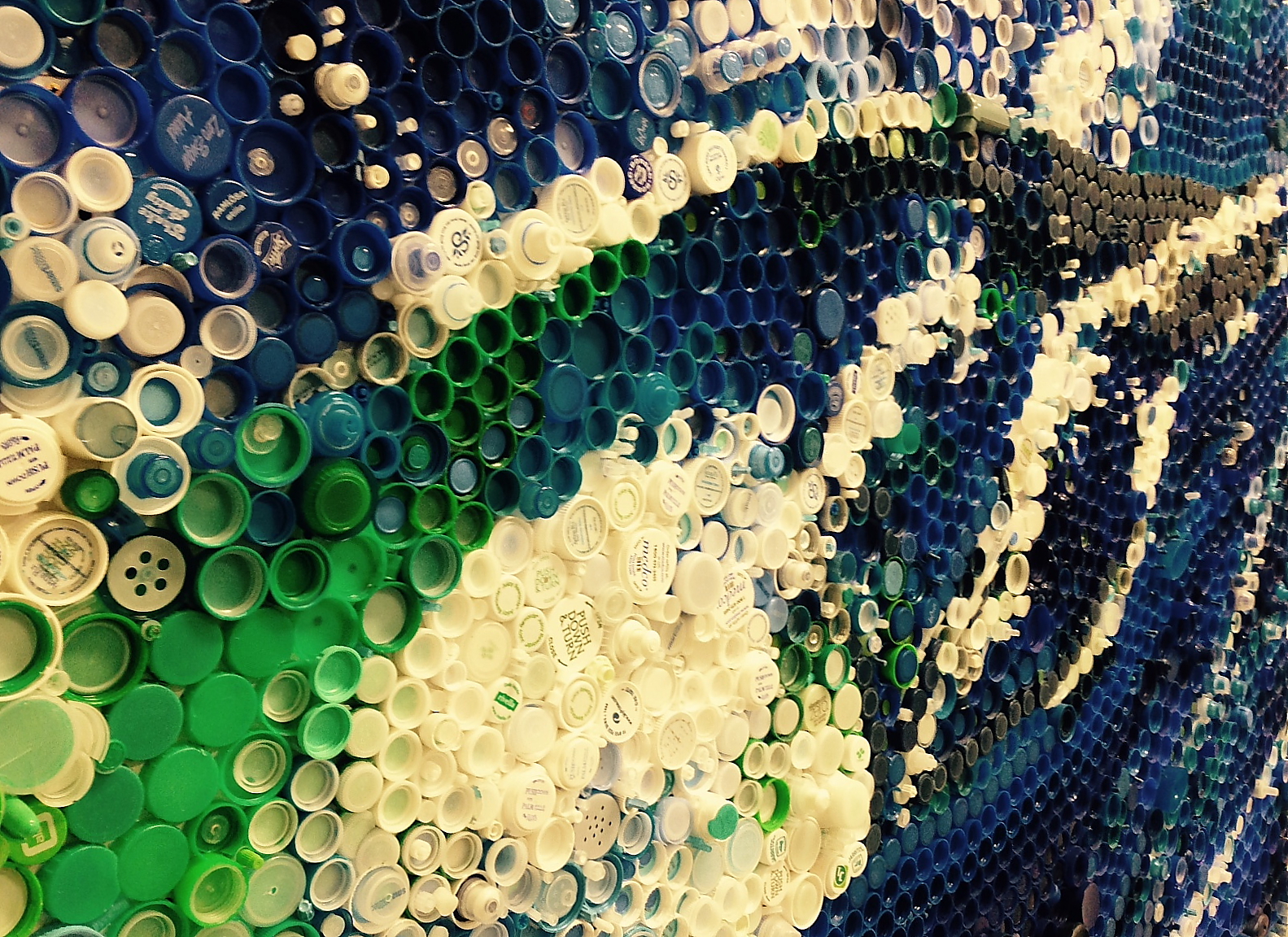 The bottle caps collection is powerful in showing how much we consume and toss away. It may seem impossible to change the environment as one individual. But if we want to survive, Mary Ellen says, we will find a way. She described the recycling program in Switzerland, which is so successful they need to import trash from Italy.

“The problem here (in the US) is people are guided by misinformation,” Croteau said. “We need educated consumers to take action.”

She used the example of the Wisconsin Shirley Wind Farm (turbines) being voted to cause health concerns among residents. On the other hand, Portland Oregon is working to increase their recycling rate to 75%.

“The partial ban on plastic bags in Chicago is a step in the right direction, but we have more work to do,” Croteau said. “It’s like Margaret Mead said: Never doubt that a small group of thoughtful, committed people can change the world.”