7:25pm The Handcuffs Love Me While You Can from Burn The Rails (Color Red) Add to Collection

Joy Merten (Into the Void) writesTacoma, Fugazi, and Avacado Smoothies: A Conversation With A.M. Stations

I met up with local band A.M. Stations to talk about their most recent release, Tacoma, how important improvisation is to the band’s sound, and how we all really love Fugazi. 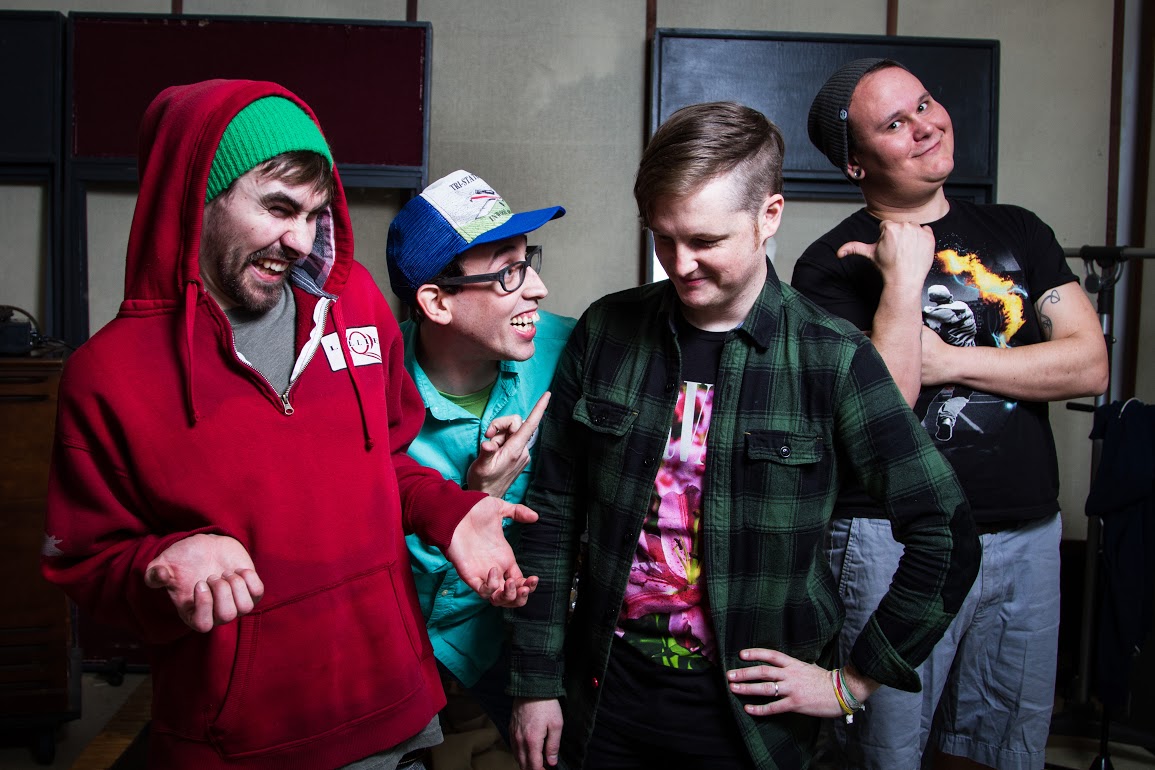 A.M. Stations began as the brainchild of guitarist and singer Bill Tucker, who is joined by Josh Tabbia (keyboards, noise), Wesley Nowlin (drums) and Alex Borozan (bass). They’re playing at local record store Saki on Friday, March 6 at 7pm, so come check out their music that mixes immediate punk jams and introspective post-rock.

I was able to speak with three out of four band members, Bill, Wesley and Josh. I learned that both Bill and Josh both ran their own record labels (1980 Records and Already Dead, respectively) so we also discussed the lively scene of small, independent record labels in Chicago, including Maximum Pelt, who released Tacoma.

Joy Merten: So tell me, how did the band meet?

Bill Tucker: Josh and I met over an avocado smoothie when we were talking about our record labels, and Wes lived in the same apartment building as me. He had told me he was a drummer and I told him I was a guitarist. I had been doing weird, experimental solo stuff for about a year but I wanted to play Josh’s Already Dead fest and I asked Wes if he would play with me.

Wes Nowlin: Bill and I jammed a couple of times and played Josh’s Already Dead Family Reunion in Kalamazoo. The show went really well. We also played some great shows together at [local DIY venue] Wally World, including our first show as Bill Tucker and the Hot Jokes. They have a kitchen area on the second floor with an open window, and Bill crowdsurfed to window and back to the stage. We were playing a song the whole time. Josh was in the crowd for that show and joined the band right before we recorded Tacoma.

JM: Which means your first release, which was recorded live at (local DIY venue) Wally World, was recorded as a three piece?

Josh Tabbia: Yeah, that was recorded as a three piece. That show was all old, solo Bill Tucker songs.

JM: Since that show, you’ve been playing and recording as a full band. How does being in a band compare with working as a solo musician?

BT: I had wanted to be in a collaborative project for a long time. I write a lot of songs and I’ve always been kind of collaborative with my bands in the past, but in A.M. Stations I’m not as controlling over my songs as I used to be. It’s been great.

JT: Starting with Bill’s songs gave us an idea of what we sounded like, but the longer we’re a band, the more collaborative it is. Everyone has an equal input.

WN: Alex, our current bass player actually recorded Tacoma. He was the engineer and he mixed it, so he knew those songs better than we did. Our original bass player couldn’t continue playing with us, so Alex slid in. The layer he adds to the band is incredible, especially now that we’re writing lots of new material. 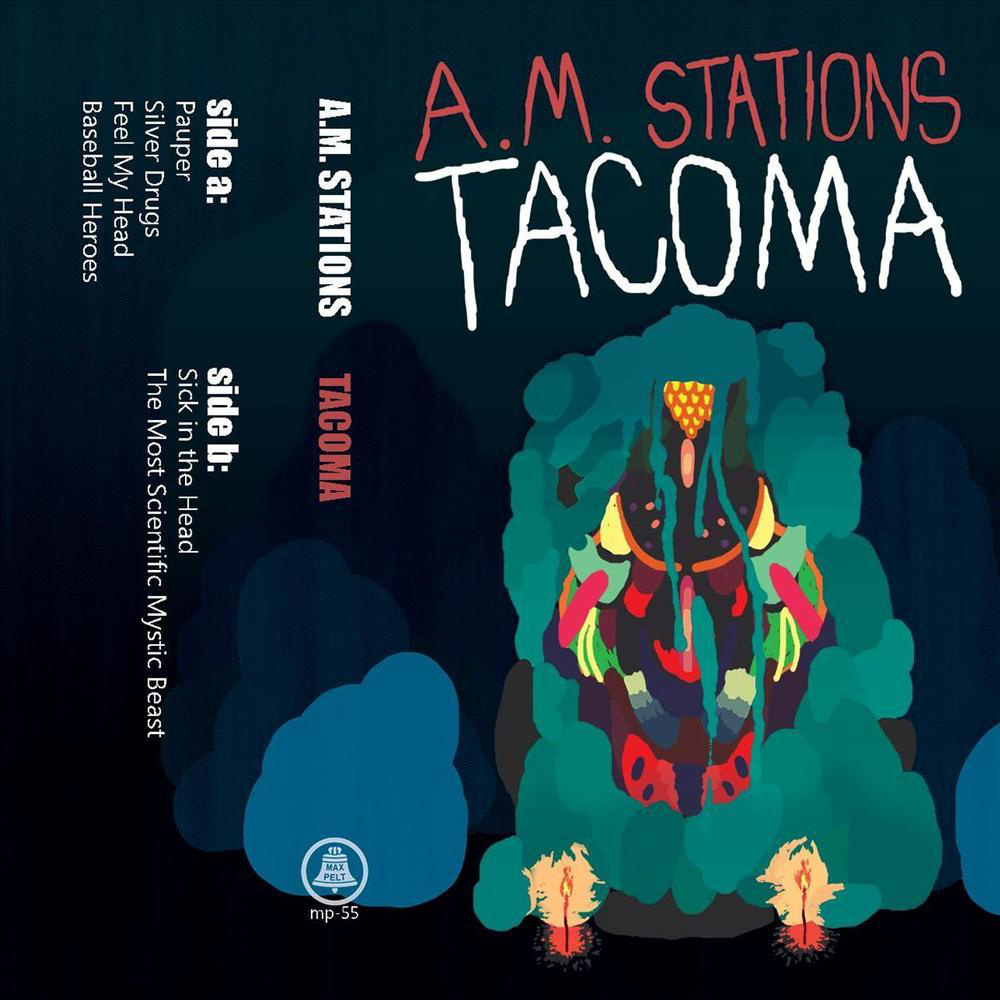 JM: Your lyrics and the way they sound are crucial to the overall feel of Tacoma, especially thinking of the repetitiveness of “Sick in the Head.” How do you come up with them?

BT: I mostly write in stream of consciousness. Some songs like “Silver Drugs” were made sitting in my living room playing it acoustic while I was making up words and vocal sounds. Every once in awhile you’ll run into a song with a word that isn’t really a word because that’s how it came out while I was improvising.

As the year’s gone by, we’ve been playing these songs hundreds of times and heard people talk about them differently. I don't like putting liner notes with lyrics because I don’t ever want to take someone’s interpretation of a song away from them.

JM: A lot of bands, especially punk bands, if you can’t hear the lyrics they’ll post them somewhere and you guys don’t do that. It seems like for you that the way the listener feels about the lyrics is the most important aspect of writing.

BT: Alex brought this up when we were trying to figure out our liner notes, and it was the best way to understand if we should put lyrics in them: If you can hear the words and understand what’s being said, there’s absolutely no reason to print it.

WN: We weren’t trying to be mysterious. There’s beauty in singing the wrong thing as a listener even if you know what the right lyrics are. You’ll sing it the other way because that’s the way it makes you feel. 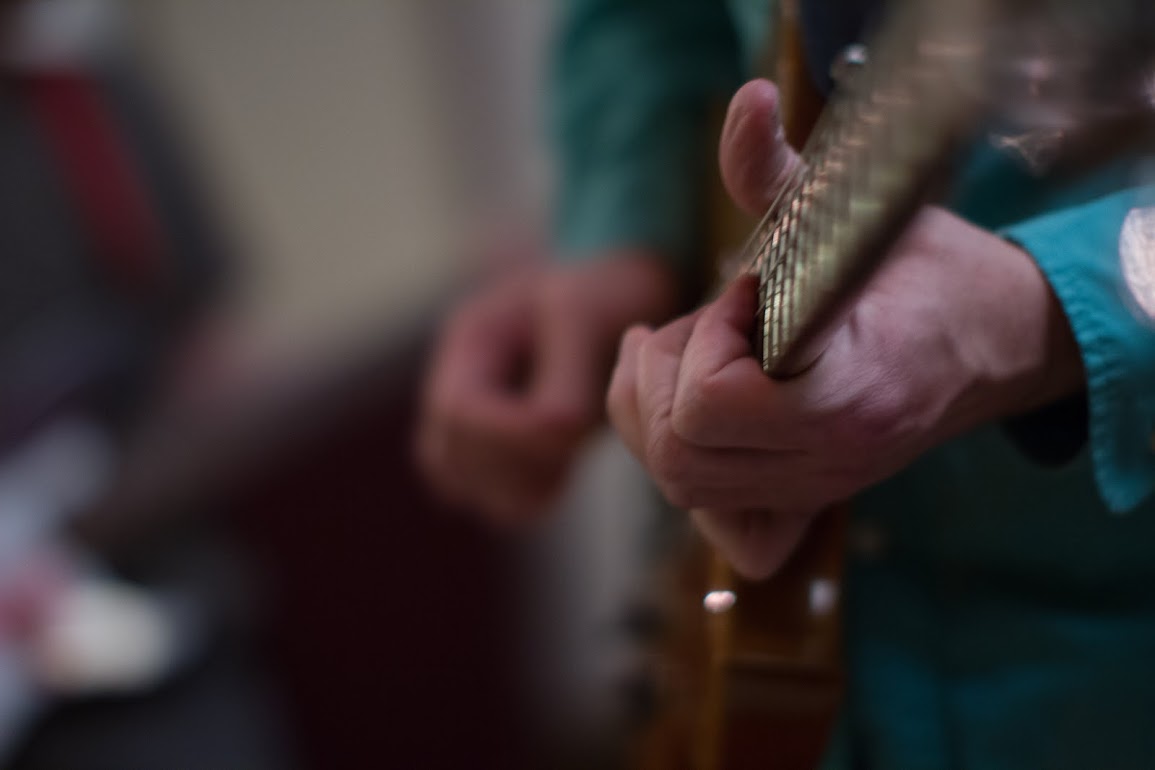 JM: The cover art of Tacoma is some kind of a colorful monster made out of a bunch of different shapes. Does it reflect the way your album sounds or the way you think about your music?

BT: It’s more the interpretation of our music by Ryan K. Ranney. He’s a digital illustrator and I’ve worked with him with my label and he does great work. He was listening to the tape a lot and he built it piece by piece based on this idea of improvisation. A lot of us come from a noise and improv background, and he does it in his art too. It’s cool that even for the project we aren’t doing a lot of improv in, he’s been able to show that it still informs our music.

JM: That leads me to my next question, about the band members’ backgrounds. You all bring influences including indie, hip hop, grind and hardcore, Which genres do you think most informs the way you all play together?

BT: I think we bring our own individuality to the band and that’s what’s so cool about it. When I was reading reviews, someone mentioned our jangly guitar. I realized that sense of jangly indie rock something I’ve always had, even though I feel like A.M. Stations is the heaviest band I’ve ever played in.

Our own solo projects are so different from what we do with A.M. Stations, so everyone was able to bring different elements in and make the band sound like it did for Tacoma.

JM: The two biggest influences I hear on Tacoma are post rock and punk, whether it’s old school emo or hardcore. I was wondering how those influences relate to each other on your album.

WN: That speaks to the diversity of our backgrounds and where we’re coming from. I played in a grind band for a few years and after that played in a post-rock band, more like Isis or Mogwai.

BT: I’m much more open-minded now. The other members of the band have introduced me to some great music. It’s awesome how many rad, heavy, noisy things are out there.

JT: We all have a background of appreciating punk, we all love Fugazi, and I think that’s something that unites us. We all grew up listening to punk, just different offshoots of the genre. 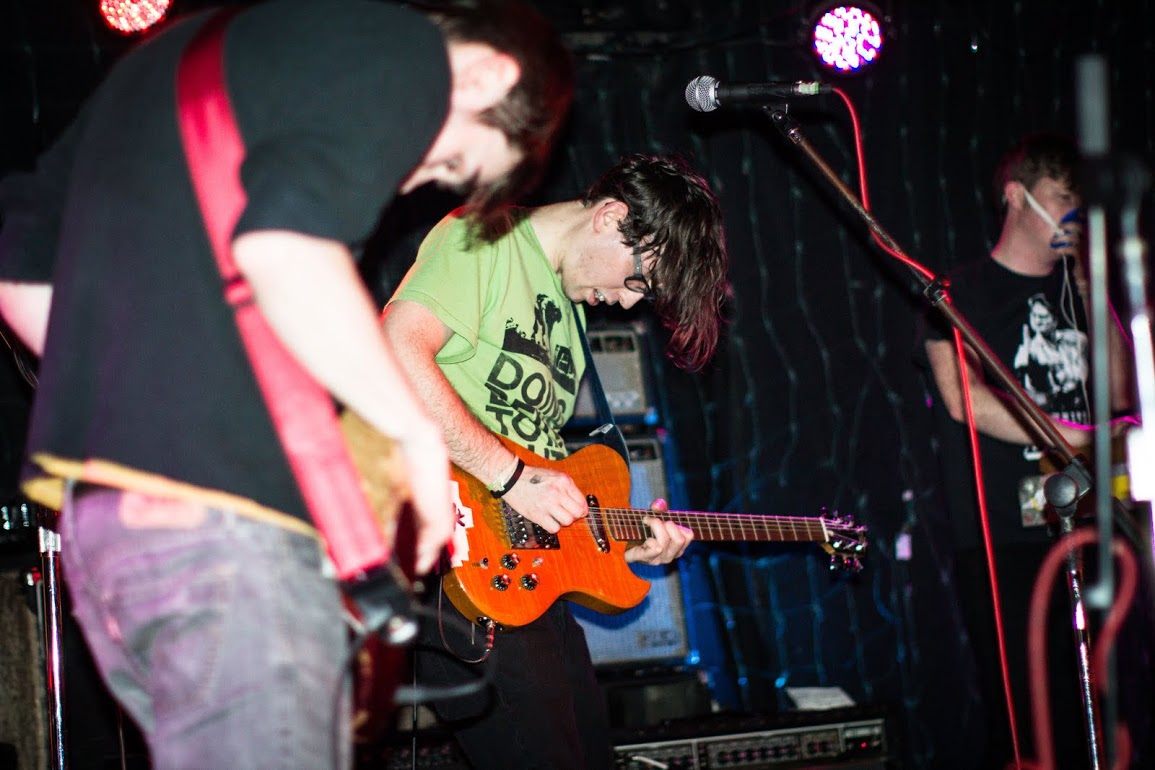 JM: Your different influences make me think of your band name and that idea of flipping through the radio stations. On your Facebook page, you have a quote from an encyclopedia about what A.M. Stations are. Are your sound and name connected at all?

BT: I found this name and I loved it. There are all these theories about what’s happening in the world and things are being hidden from people or simply overlooked. For example, there’s an A.M. station called the numbers station. Supposedly it’s a way for spies to be able to communicate info to each other, but you can never figure out where the source is. As you try to track it down, you just find another radio tower. And that’s just one AM station.

JT: The name plays into the experimental and antiquated things we appreciate as a band too, like releasing cassette tapes.

JM: Well, it’s becoming less antiquated, especially in Chicago, where there are tons of labels releasing cassettes. How did you end up putting your tape out with Maximum Pelt?

BT: I played a solo show back in ’05 with Magic Ian [who runs Maximum Pelt] with him where we both played acoustic, and nobody was there besides my sister and a couple of friends. That’s when we really got to know each other better. He’s been really supportive over the years, and when we finished the tape he was the first person I thought of. 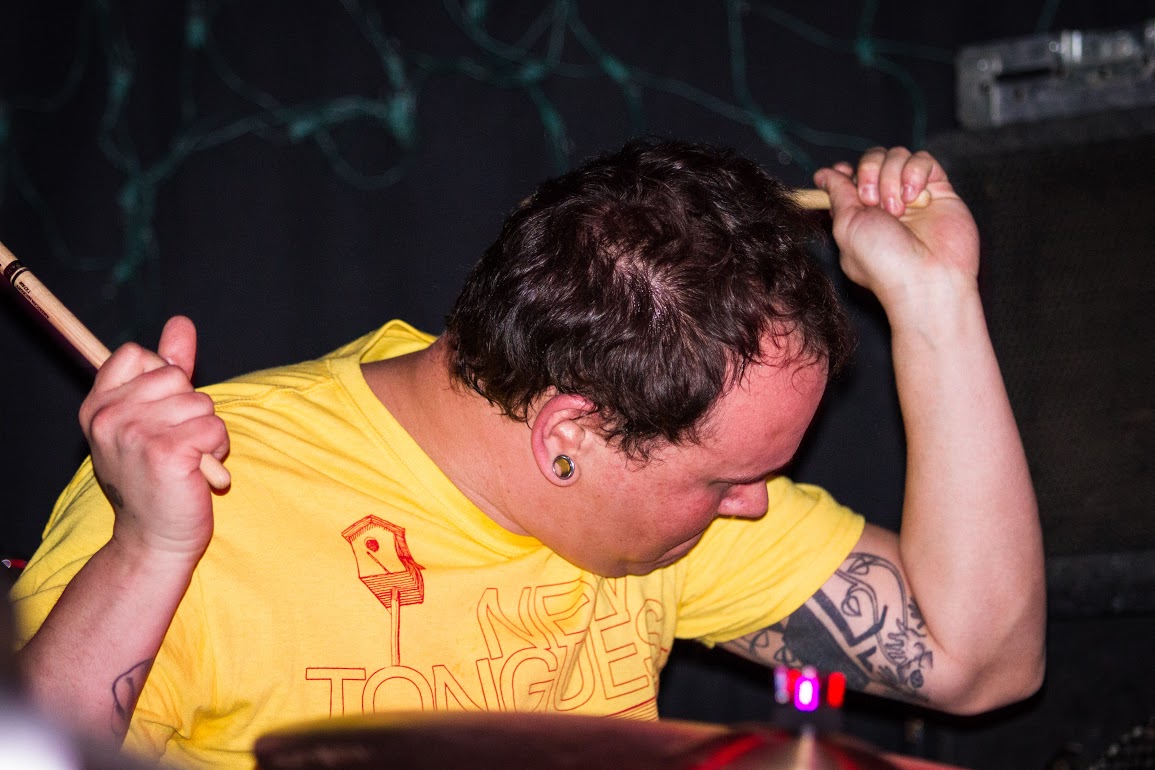 JM: Do you have any plans for the future, whether it’s recording or shows?

BT: We’re also playing at Saki on Friday at 7pm. It’s during a show for Justin Santora, a screenprinter, who is showing his most recent work. It’s a collaborative event, since he wanted it to be a punk show and an art show at the same time. His work is really inspiring, come check it out!

"The Most Scientific Mystic Beast" by A.M. Stations from Evan Clayburg on Vimeo.

Previous entry: Join Us for The Juliana Hatfield Three at Lincoln Hall on March 7th!