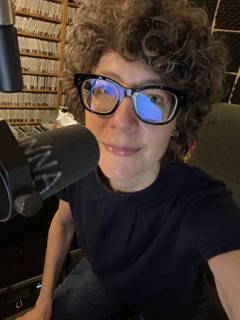 Music- in one way or another- has been a hobby of mine since childhood. Around age 8, I established my own radio station, WJOJO, where I was the sole DJ, engineer, programmer, weather reporter, and commerical actor. Equipped with a tape recorder and an RCA record player, I played from my and my mom's 45 collection. By the time I reached middle school, I'd forgotten about WJOJO, but advanced my fandom to attending rock concerts like Corey Hart, Duran Duran, Flesh for Lulu, and Gene Loves Jezebel. Many years later after moving to Chicago I played bass in the goof-pop bands Los Shut Up and Let's Get Out of This Terrible Sandwich Shop. And after many years of listening to CHIRP Radio, I joined up as a volunteer and learned how to DJ and host my own show (for real). WJOJO doesn't exist, but you can catch my show Thursdays, 6-9AM. I promise I won't play Corey Hart.

You can listen to Joanna's two most recent shows below: