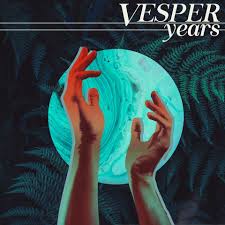 Samantha adds as an example a similarly minded artist.  “When Lykke Li first arrived in my world I lost it. Finally, songs that relate to that low ache in my heart that I’ve never been able to shake, but that aren’t acoustic and slow. I like to wiggle! Anyone close to me will tell you that . . . I live my life as positive and optimistically as possible, but the truth is that between what life has handed me, and the way my body is made up, I deal with a lot of hurt regularly—physically and emotionally/mentally. The thing that makes me so happy about Vesper is that I literally sing about my lowest lows with new friends while smiling my face off and jumping around covered in glitter.”

Aside from Li she cites Stephen Sondheim, Andrew Lloyd Webber, The Beatles and Led Zeppelin as early inspirations, with Joni Mitchell’s “Blue” album being especially pivotal.  Today she also adds more modern female folkrans like Neko Case, Laura Veirs, and Brandi Carlile If forced to describe the sound of Vesper, she would call it modern ABBA, she says with a laugh.

Zachary would call it earnest pop music, and says he usually compose tracks alongside animated movies or episodes of the nature documentary series Planet Earth on mute.

In terms of putting together the music video for “I Wait,” Vesper had worked with director Ellie Pritts previously collaborated on photo edits and Zachary says “her style and color pallets felt like a natural fit. When shopping for directors, we like to feel as if someone has been in the band for years. It was exactly like that while working with Ellie.”

Vesper’s “Years” “tackles heavy subjects but does it in a digestible way,” as Zachary puts it, and they liked the idea that the video to “I Wait” showing their “goofy side,” and they agree it’s a unique approach to a 2019 pop tune.

Fans of the original Star Trek TV series will see an obvious inspiration--  in fact, Pritts says the main location for filming was actually the same place they filmed the amazing Captain Kirk v Gorn battle in the "Arena" episode.  As a synesthetic, she says music and color go hand in hand, and when she had an exact idea of how she wanted everything colored, from the scenery to their costumes and especially Samantha's skin and hair.  Pritts actually did Samantha’s makeup and hair styling, as well as the costume design for the video, but she’s quick to give credit to her Director of Photography Jon Pham for his coloring skills for helping her realize the vision.  “We went back and forth tweaking it a few times,” she relates, “and then it was pretty much perfect!”

Samantha of Vesper adds that Pritts’s entire team was “beyond incredible” and adds that she feels like “we made a new family while we shot that video.”

Without further ado, check out the video below, go to Vesper’s website or visit them on Facebook to hear more of the record and pick it up if you like it, and maybe the band will see you at their record release show at The Empty Bottle on Tuesday night!

Next entry: @CHIRPRadio (Week of April 15)

Previous entry: The Fourth Wall: Can You Ever Forgive Me?