9:23am Tiny Tim I Got You Babe from God Bless Tiny Tim (Warner) Add to Collection 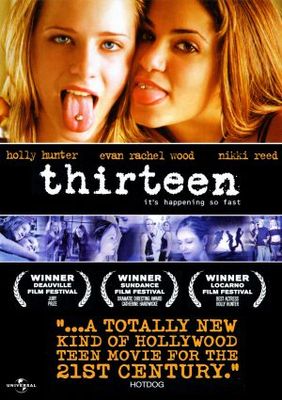 In some ways, Thirteen reminded me of a more benign variant of Darren Aronofsky's Requiem for a Dream? Neither are easy to digest, but Requiem pretty much represents Absolute Despair, while there are limits as to the amount of trouble a 13-year-old can become embroiled in, even in Southern California. While Thirteen lacks Requiem's overt visual tricks, Hardwicke slowly begins to wash out the film's colors as Tracy's life spirals downwards -- a subtle mirroring of the fading of her own promise.

What did you think of the film? And did you reflect on your own childhood while watching? To give you an idea of the social circles I ran in back then, I don't think I was cool or confident enough to talk to the girls that Tracy ditched at the outset of the movie...

And here's a cinema-watching question: when viewing at home, do you ever pause films when uncomfortable/awkward scenes arise? I probably put Requiem on hold about a dozen times to steel myself whenever tension loomed ahead; Thirteen didn't leave me quite as on edge, but it still had the stomach churning. This is one big reason why the movie-theater experience is still second-to-none; one is forced to keep marching through the story, innards be damned.

Generally, the only time I’ll pause a film’s content is when I didn’t hear a crucial piece of dialogue. That’s one of the great benefits of home-movie watching – that and being able to pause to go to the bathroom. I’ll still adopt similar behaviors at home that I use at a theater, though. The lighting and my viewing positon need to be right, and free of interruptions. Most of the time, I prefer to watch movies alone to avoid distractions.

I can say emphatically that this movie didn’t bring back childhood memories. Like, at ALL. I was a “band geek” and drug-free all the way through high school. I’m the person that the Tracys of the world were trying to get away from.

[Which, BTW, with decades of hindsight, is just fine with me. Many of the people I knew who got hard into drugs and juvenile delinquency ended up struggling to get sober and earn a GED.]

From my personal context, this movie struck me as an effective R-Rated After School Special. Drugs – just don’t mess with ‘em, kids! Or, if you do, stick with pot and the occasional bottle of Everclear.

Excellent performances, direction, and writing all around. You’re right about the refreshingly natural dialogue created for Tracy and Evie. I think it’s worth taking a closer look at the difference between those two. Tracy’s the confused and depressed kid who wants to run with the popular crowd to compensate for a sad family situation. Ultimately, she seems to get that what she’s doing is wrong, which leaves open the potential to her to grab a lifeline from the people who care about her.

Evie, on the other hand, appears to be your basic all-around sociopath. Throughout the movie, she displays pretty much all of the signs: over-inflated ego, superficial charm, constant lying and manipulative behavior, lack of empathy or remorse, impulsive thrill-seeking or criminality, having few or no real friends (she’s “popular,” but her relationships are shallow at best).

It’s not clear if Evie might be mirroring her mother’s behavior or if it’s innate, but of all the characters in the movie, she’s the one I wouldn’t turn my back on. She could be on her way to a thriving career in the C.I.A., or maybe a high-level corporate executive position.

This production brought to mind the controversial movie Kids (1995). When a movie’s plot involves the sex lives of (very) young women it can register as a bit exploitative, especially following the late ‘90s Britney Spears-ation of American entertainment. I wondered, would this film have gotten the attention if it was two pimple-faced average-looking girls cavorting around in tight clothes rather than Evan Rachel Wood and Nikki Reed? Or is my assessment too shallow?

And when it comes to tales of teen angst, do you have a preference between the realism of films like this or the more stylized storytelling of movies like Rushmore?

It's probably not a surprise that I lean heavily towards realism, though I do have a soft spot in my heart for Rushmore. Part of the reason might be that killer British Invasion soundtrack? However, I also loved The Royal Tenenbaums' soundtrack and found that film to be a bit of a bore. Perhaps at some point we need to have a Wes Anderson conversation? (He sure seems to love those upper-crust New England families, eh?)

With regards to the drugs, alcohol, self-harm, and even Evie -- I also viewed these as symptoms of Tracy's problems rather than the cause. I think it's likely that with a strong family (in particular a father who had the slightest bit of time for his kids), she remains with her original set of friends and doesn't give Evie a second thought. It's that lack of self-worth that she can't find at home which prompts her to seek it elsewhere.

I still have yet to see Kids, but as far as your question about the viability of average-looking teens in sexually-charged roles, well... my short answer is no. Obviously, there's a double-standard with regards to Hollywood and beauty; becoming an actress is a mighty tough road for a woman who's not a knockout, no matter what the age. Of course, a film like Thirteen isn't based around summer hijinks, and considering the gravity of the tale, pretty faces weren't seen as a ploy to help sell tickets.

But it's probably a sad truth of middle/high-school environs that one simply doesn't get to achieve a great deal of social status unless they look like Nikki Reed? The plot would likely fall apart with an average-looking girl in the role of Evie, since she maintains her position by having all the boys pine after her. Also, I completely agree with your take on Evie as being quite a budding sociopath. Her about-face during the film's climax, where she turns on Tracy at the drop of a hat, is rather chilling indeed.

It's interesting that you bring up Britney Spears -- one might argue that the seeds of the sexualization of young women were planted with the advent of MTV, but Spears' "naughty schoolgirl" brand certainly took it to another level. However, I'm not sure what I'm supposed to think as far as the larger issue of female sexuality in mass media. Do we wind up protesting the use of sexual imagery re: girls for the wrong reasons, such as some paternal urge to treat women as helpless creatures who need their chastity defended? And on that note, what did you think of Tracy's older brother Mason (Brady Corbet) and the fact that the primary male characters in the story (Tracy's dad, her mom's ex-addict boyfriend, and Mason) seemed largely impotent here?

[For a fantastic fly-on-the-wall snapshot of modern-day high-school girls, I'd strongly recommend checking out the documentary All This Panic, from filmmaker Jenny Gage. Thankfully, none of the women profiled were in anywhere near the dire straits that Tracy found herself in, but it's still clear that navigating school and the world at that age is a mighty tall order.]

When I think back to the early days of MTV, the women who were most often featured on the channel (Cyndi Lauper, Pat Benatar, Madonna, Tina Turner, etc.) were far from the jailbait image of the female pop star that took over in the ‘90s. These were (and are) strong, fierce, independent women. And as such, they turned off parts of society who preferred their females to be more "traditional."

MTV, being a for-profit business, is always seeking to maximize revenue. Getting people who have no interest in music to watch and listen is a way to do that. The fastest way is to amp up the sex and titillation, in correspondence with American cultural values.

This treatment and conception of young women in media is, in my opinion, as much an economic result as a moral one. Men with copies of Barely Legal stashed away in their closets are an addressable market just like anyone else.

The men in this movie seem relegated to the background, but I didn’t have a problem with it. I think they would have made it harder to get into the details of Tracy’s situation, especially her relationship with her mother Melanie.

One of my current favorite TV shows is Mom, the story of recovering alcoholic Christy (Anna Ferris) and her relationship with her mother and fellow recovering alcoholic Bonnie (Allison Janney). When the series started, there were a bunch of subplots involving Christy’s kids and her workplace. Five seasons in, though, the producers figured out that the relationship between the two leads and their immediate circle of friends is what makes the show go.

Focusing on these one-on-one family relationships is what separates Mom and Thirteen from movies like Leaving Las Vegas and Permanent Midnight, which are more concerned with showcasing the artful suffering of the individual. Great performances like Holly Hunter’s show how painful it is to watch someone fall into the abyss, and how much love it takes to get them back.

Next entry: @CHIRPRadio (Week of November 20)