Welcome to The Fourth Wall, CHIRP's weekly e-conversation on cinema. This week's subject is the Australian crime thriller The Square. 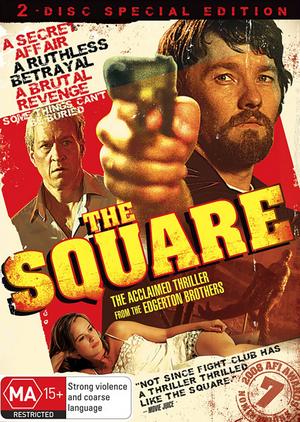 I don't even need to complete the above verse, do I? You know what's coming next. And while we can't be sure of exactly what will befall Raymond Yale, the hapless protagonist of the 2008 Australian thriller The Square, we're quite certain that he's digging himself a deeper and deeper hole in attempting to cover up increasingly egregious sins.

Ray (David Roberts), a successful construction foreman who's not above squeezing his contractors for payola, is sleepwalking though his marriage. His wife suspects what we know: he's found a paramour in the much-younger Carla (Claire van der Boom), who sees Ray as her ticket to escape from her own husband, the shady, menacing Smithy (Anthony Hayes).

During their hotel trysts, Carla pushes Ray to leave his wife and commit to something permanent. Ray is less than convinced, but when Carla discovers a huge stash of cash brought home one day by Smithy (presumably through nefarious means), she and Ray agree to abscond with the money and start a new life together. The only quandary: how to steal the cash without inviting reprisal from Smithy?

Enter Billy (Joel Edgerton, also the screenwriter), an arsonist who's hired to burn down Smithy and Carla's home -- and hey, if the money actually disappeared before everything turned to ashes, who would be the wiser? However, the arson has a couple of very serious hiccups. And so ignites a firestorm (no pun intended) for Ray that grows more dangerous as he strays further from the straight-and-narrow.

The concept of black-and-gray morality is one that's fascinating to me. Ray is certainly selfish and a bit greedy, but he ain't exactly evil. He never wishes physical harm on anyone, nor does he delight in wreaking havoc or causing misery. Are we supposed to sympathize with his plight here? The way the story is constructed, I got the sense that we're encouraged to hope that just maybe he'll be able to get away with his misdeeds? Unfortunately for him, each cover-up requires a bigger gamble, to the point where everything is on the line by the conclusion of this sordid tale.

More broadly, Clarence, what did you think of the film? Are you a fan of noir in particular, and if so, how did The Square compare stylistically with the works of Hitchcock and the Coen Brothers? The latter's Blood Simple was cited by one critic for their similarities as far as "darkly comic" tone, and I think I agree; it's pretty clear that poor Ray is in way over his head, and try as he might, the guy never seems to be able to catch a break.

Also, did the setting of Australia add anything to the atmosphere for you? I've always felt a vague rough-and-tumble vibe emanating from that country -- though perhaps this is the by-product of a dozen viewings of The Road Warrior? As well as the all-too-real horror of Wake In Fright...

I’m a big fan of noirs, both old and new.* I think the genre is an important reflection of and response to a world dominated by capitalist themes of greed, quick fixes, and a winner-take-all mentality. Desperation, both economic and romantic, also plays a part in some way. It’s always interesting to see what desperate people do and wonder, “Would I have made the same decision?”

[*There’s a good one on Turner Movie Classics this Sunday called Detour (1946), which features Ann Savage in one of the greatest femme fatale performances ever.]

The problem with Ray’s situation is a problem seen in most noirs – ultimately, it’s the protagonist’s own damn fault they’re in their mess. At various points, they have options that would enable them to escape danger. But the lure of a life of easily-acquired riches, often symbolized by the Bag Full of Money, leads to a poor decision at a critical juncture. Each choice after that is like trying to pull bubblegum out of someone’s hair – every move just makes things worse.

I enjoyed this film. While it’s not quite at the level of movies like A Simple Plan or No Country for Old Men, it’s a good production that kept me engaged. David Roberts was an excellent choice to play the everyman at the center of the storm, and van der Boom has the tempting, slightly sordid bearing of a Juliette Lewis. The cinematography and production design were very well-done for what feels like a low-budget film. There were some cool camera shots throughout, like the one of Billy after his ill-fated arson, where he sits on a hill and grimly watches an ambulance speeding down the street below.

I also liked the economy of words in Edgerton’s script. There’s not a lot of talking in this film. Or I should say, there’s just the right amount of talking needed to tell the story. It’s almost an anti-Tarantino approach to putting words together. In this whole film, I can’t remember anybody saying something clever, and I’m fine with that.

You mentioned Hitchcock – it struck me that director Nash Edgerton might have been going for something similar to The Birds with the subplot of Ray and Carla’s dogs. It’s like the universe, through nature, is judging the immoral actions of certain people and arranging for punishment…?

The story’s setting in Australia was nice. It’s always interesting to experience another culture’s differences in speech, culture, etc. I wonder, though, about the extent of Ray and Carla’s plan. Where would they go? Also, in the 21st century, walking around with a pile of cash raises a lot more suspicion than it used to. Kevin, if you found yourself suddenly in possession of some loot, what would be your next move?

It's telling that my first three money-laundering ideas came from Hollywood. I present to you, from least-to-most-likely scenarios:

1) The Sopranos, "Pine Barrens" -- PB is the episode most agree is the best of the series (and I concur), where Paulie and Chrissy are lost in the snowy PIne Barrens after the haphazard would-be murder of Valery the Russian goes awry. Dark comedy galore! As it turns out, Tony launders money through the head of Valery's family, Slava. "Isle of Man, four days, clean as whistle." I know zero Russian criminals. Or Russians, period. And I don't think hanging out at Russian Tea Time downtown would open up these doors.

2) The Wire, "Not For Attribution" -- Baltimore drug kingpin Marlo Stanfield gets schooled in the ways of money laundering by Prop Joe, who shows him how to "donate" his cash to charities in the Caribbean; said charities then turn around the dough, minus their cut. Seems like I could feasibly pull this off if I were pointed in the right direction? And if not, there are always attorneys like Maury Levy to lend a hand.

3) Office Space. "I can't believe what a bunch of nerds we are, we're looking up 'money laundering' in a dictionary." 'Nuff said.

I was thinking the same thing you were re: Ray and Carla, though. It's the 21st century -- you can't just move to a different town, change your name, and create a new life like you could before the computer age. He was just going to leave his current construction project half-finished? What if the subterfuge involving the actual "Square" was discovered? And it's not like that pile of cash was large enough to retire to the islands on. But we're judging this from a healthy distance, and passion has a way of scrambling one's senses... although you'd think the fact that Carla was married to a pseudo-gangster would be at least a little sobering.

Also, agreed on the anti-Tarantino vibe. Could we imagine Ray cracking any jokes even during sunnier times, let alone when his life is crumbling around him?

You mentioned A Simple Plan -- Sam Raimi's thriller is also one of my favorite noir films of the last two decades, along with Brick, Dark City, and The Spanish Prisoner. (And maybe we should discuss David Mamet's TSP at some point -- I've thought about that film a lot.)

So, from Wiki: "Classic film noir has been associated by many critics with the American social landscape of the era—in particular, with a sense of heightened anxiety and alienation that is said to have followed World War II." I'm guessing most folks would agree that such anxiety and alienation both saw a major bump during/after the Vietnam War. And probably then again after the commencement of the seemingly-perpetual War on Terror.

We've certainly seen a sharp rise in the popularity of dystopian tales, and our views of the future (such as those captured in the previously-discussed Black Mirror) are overwhelmingly negative. Hell, just look at the difference in tone between today's Superman and the Christopher Reeve version of the '70s and '80s! Night and day. Poor Chris and his Shining White Knight persona seem positively quaint in 2017.

My question for you is a broad one. How much do you feel art impacts public perception, as opposed to reflects it? Is there an echo-chamber effect, in terms of people sticking to films which reflect their worldview? Would a steady diet of noir make you interpret the world as a darker, corrupt place -- or is it just as likely that one would enjoy the genre because they carried those views into the theater?

On the whole, I think it’s the latter. I think about a movie like Bonnie and Clyde. The real-life criminals were very popular with the public as they rampaged across the Depression-era South, while the Warren Beatty biopic about them is also highly regarded as a 1960s masterpiece. That’s the power of motion pictures – they make wish-fulfillment real enough for most people.

I think movies in general are a great way to take the moral and psychological temperature of a society at the time a film is made. It’s easier to see this relationship via films from smaller countries, but gets more complicated with Hollywood and places like Canada and the UK. The desire to make a big-budget movie palpable to as many people as possible almost always leads studios to eliminate unpleasant or uncomfortable ideas, however a society might define them at the time.

I find it interesting that when a high-profile American movie gets the green light to go “dark” or “edgy," that usually just means it’s OK to turn down the lighting and amp up the violence (like with the latest Superman reboot you mentioned).

I’ve never seen The Wire (one of my great modern movie/TV shortcomings), but I think one reason It’s held in such high regard by viewers is that it presents a part of the US that isn’t shown in the Law & Order world, where there are clear good and bad guys and everything wraps up nicely by the end of the hour.

You mentioned The Sopranos as well, another great show featuring moral ambiguity and complex characters. Those two shows, along with Breaking Bad, prove there's a strong market for noir-themed material, if it's well made.

Discontent has always existed at the fringes of visual storytelling. Who would have thought that the main place to see it would be cable TV?

Next entry: @CHIRPRadio (Week of October 9)