7:50am The C.I.A. Bubble from Surgery Channel (in the Red) Add to Collection

Welcome to The Fourth Wall, CHIRP's weekly e-conversation on cinema. This week's subject is the psychological horror movie The Babadook. 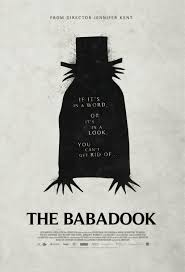 Amelia is a young woman whose life is enveloped in tragedy. Seven years ago, her husband died while driving her to the hospital to give birth to their son Samuel. Raising a child alone has meant a lot of stress and sleepless nights. Samuel has always been a handful behavior-wise, but things get even worse when one night he and Amelia find a peculiar book to read for bedtime, The Babadook, about a darkly mysterious figure whose malicious intents directed toward this mother and child are made clear in the nursery rhyme text.

What is this thing? What does it want? And how did that book get in the house? Amelia must figure it all out and do something about it before it’s too late.

Kevin, I’m not a big horror movie fan. I’m not anti-horror, the genre just doesn’t appeal to me as much as others. But I really liked this movie. Essie Davis and Noah Wiseman did a great job with what must have been some exhausting roles. Director/screenwriter Jennifer Kent’s story is original and tightly paced. Simon Njoo’s editing gives the film a nice sense of propulsion all the way through.

I also appreciate how the horror is “logical” because it’s based on things happening in the characters’ lives. It’s very much unlike the parade of "torture-porn” scary movies that seem to have dominated the market for the past several years.

For me, this film is right up there with Get Out as a quality scary and entertaining movie. Did you like it? How did you think Wiseman’s performance compared to that of the kids in the film we talked about last week, The Florida Project? And what are your all-time favorite scary movies?

Some thoughts on TB, before I offer up my favorite horror films:

1) It's tough to compare Wiseman's performance to those of the Florida Project kids. Sure, he's a pretty annoying little tyke, but his character is there primarily to be stressful. Davis' Ameilia gets it from both ends, with a thankless caregiver job during the day, and then the frustrations of dealing with a reckless boy during her off-hours. After the film's namesake arrives to snatch what's left of her sanity (and potential sleeping hours), she pretty much looks like Death Warmed Over.

2) The book was a genius idea, and Amelie's encounter with the "revised" version that appears on her doorstep certainly generated Maximum Dread. Did you know that the filmmakers produced a book for sale in response to public demand?

3) Some critics have theorized that the monster was actually a metaphor for Amelia's grief and/or trauma re: her husband's death when her son was born? And the director suggested that it might've been Amelia herself who wrote the book while in a trance! Reminiscent of Fight Club, where Tyler Durden creates all sorts of mischief while the Narrator sleeps?

I'd rank The Babadook above Get Out -- in one of our first discussions, I lamented how the latter film could've been a piece of cinema genius if it hadn't pulled its punches in the final half-hour. But I also wouldn't rate it in my top-tier of horror films, which (drum roll) include:

* The Terminator (Some folks consider the original to be a horror film! I subscribe to this theory.)

* Requiem for a Dream (perhaps not a traditional horror film, but certainly one of the scariest movies I've ever seen)

There are lots of other great horror yarns out there that simply rank a half-step lower in my estimation? They include It Follows, [REC], The Orphanage, and The Ring, among others. Also, I'd be a happy man if we could retire zombies for a while? Say, the next 25 years, at least?

What are your favorites? I've mentioned before how I'm fascinated with the concept of comedy and what we find funny; I'm similarly intrigued by what we find scary, and how filmmakers are able to tap into those fears. Did you ever read Stephen King's Danse Macabre? It's a fantastic overview of the genre, covering everything from print to radio and film. (Have you read much horror fiction in general?)

Other than Kubrick's version of The Shining, I've never seen anything by Stephen King. I'm too much of a scaredy cat! I've heard that the new version of It is pretty good, which probably means I would spend most of it covering my eyes. I still have to work up the nerve to see movies like Last House on the Left and Nightmare on Elm Street.

That's an impressive list you have there. I've only seen a handful of them. My personal list of favorite horror films is much shorter:

Night of the Living Dead

Aliens (the 2nd movie in the series)

The Ring (US Version)

I know all the cool people thought Blair Witch was stupid and totally not-scary, but I thought the filmmakers' concept and execution were very effective. It's my bland Omaha upbringing: can't eat super-spicy foods, can't handle super-scary movies...!

And can I second and third your comment about zombie movies? That is a seriously overused horror theme. It makes me wonder, though, what are some underused or never-used horror ideas that could fortify the genre? I've always thought religion-based terror (satanism, shamanism, tribal curses) was an effective way to generate scares. Major studios don't want to offend potential audiences by getting too specific, though. Most serial killer stories tend to exist more in the police procedural/thriller genre than horror (Se7en being the exception that proves the rule).

Since a lot of great horror films are rooted in societal fears at the time, what is it about our society that might make good horror fodder? Or does the 24/7/365 news cycle take care of that for us? Also, is there any kind of scary movie you will not watch? For me, it's torture-porn (Hostel, Saw, etc.) although I don't dismiss splatter films in general.

As for Aliens -- there's some debate (as in the case of The Terminator, which I mentioned earlier) about whether it's more an action film than a horror film, but regardless, it's a superb work of cinema, and certainly one of the most unrelenting, grim films I've seen. If James Cameron had ended his career there, having directed both films in a three-year span, he'd have been a legend based on that duo alone.

Also, I agree with you about Blair Witch -- the filmmakers were doing Found Footage in the days before cheap handcams and smartphones! Though, I also wonder if it's another film that hasn't aged well due to production values.

We saw lots of religion-themed horror in the late '60s and '70s with the aforementioned Rosemary's Baby/Exorcist/Omen trio, and demonic possession seems to be a theme that never quite goes out of style. What I've always found interesting is that the church tends not to have a fond view of such works... yet in these tales, religious figures are quite often portrayed as heroic. Has there ever been a stronger champion of Christianity than Max von Sydow's Father Merrin in The Exorcist? The crucifix, holy water, and the Eucharist are all brought to bear against the demon-possessed girl Regan, culminating with the repeated chanting of "the power of Christ compels you!" during the climax.

Coincidentally enough, I've done two radio shows about horror cinema and societal context! Both were with Kendall Phillips of Syracuse University (and the latter was a podcast for CHIRP), you can find them here and here. Kendall does a much better job of articulating the link between horror and real-world fears than I ever could, but he has mentioned that it's often difficult to dissect current horror trends as they're happening? Distance and historical context brings clarity. Of course, it's not a shock that the internet and social media are being woven into current horror themes, from Unfriended to The Den, as well as various episodes of Black Mirror.

Is there a kind of horror film I won't watch? This probably won't surprise you or other readers, but the horror/comedy shock subgenre -- probably most exemplified by the Evil Dead franchise -- just ain't for me. I like my terror unadulterated! That being said, there have certainly been self-referential horror films like Scream and Cabin in the Woods* that worked for me, and in particular, the last 15 minutes or so of Cabin was one of most tense and shocking sequences I've seen.

Next entry: @CHIRPRadio (Week of October 30)

Previous entry: An EP For The End of the World