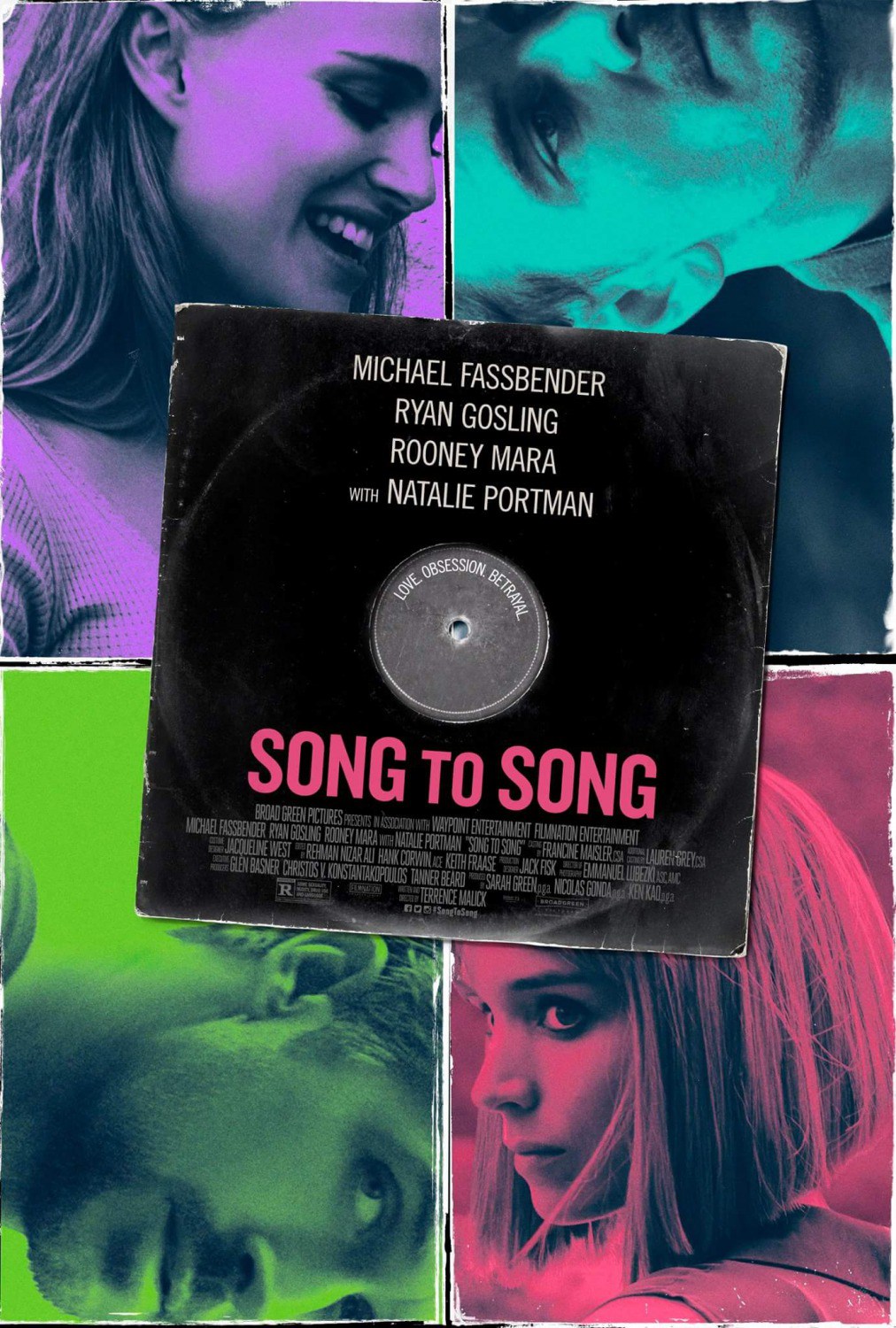 Of course, "along the way" involves traipsing through a series of upper-crust Austin properties, moshing at (presumably) SXSW, and enjoying varying degrees of hedonism. Fassbender's Cook in particular seems to have become long since numb to beauty -- whether it involves land, art, or people.

The narrative, such as there is, certainly isn't spoon-fed. There are jumps in chronology that are frustrating ("Wait, Ryan Gosling is with Cate Blanchett now? Where did she come from...?"), but at the same time, I never found the film boring; there's always a path to follow, and as someone who endured the pain of sitting through Inland Empire (David Lynch's last studio release, 2006), I felt STS veered much more towards "challenging, introspective cinema" than "endless non-sequiturs." While there's no question that Malick's latest will be viewed as self-indulgent by some, it left this viewer in a rather contemplative mood.

It seems impossible to me that Malick doesn't edit these films himself -- one shudders to think of what the actual scripts look like, and how much is left on the cutting-room floor. STS spent about three years in post-production, with an initial cut of eight hours (!) that unsurprisingly caused some consternation among the film's financial backers.

Clarence, have you seen The Tree of Life? Did you enjoy Malick's style and worldview? There wasn't much in the way of musical performance in the film, but did that backdrop work for you?

Clarence: The only work I've seen of Terrence Malick are parts of Days of Heaven and The Thin Red Line. I think the closest movie I've seen in terms of his style is Out of the Blue (1980), which was directed by the late Dennis Hopper and also featured music performance and illicit sex as a backdrop. By no means am I an expert, but I definitely appreciate Malick's reputation in the film world.

There were about a dozen people in the theater when I saw STS. Three of them walked out about halfway through. I don't blame them. I didn't hate STS. I didn't care enough about it to hate it. Credit to cinematographer Emmanuel Lubezki: Austin, TX never looked so sumptuous, but any city would if you focused on the high-end properties. Eternally separated from the crowd by private jets and All-Access festival passes, the main characters' arcs felt punishingly claustrophobic, which would be fine if they were of any interest to me.

One of the three dozen classic lines from Casablanca goes "...it doesn’t take much to see that the problems of three little people don’t amount to a hill of beans in this crazy world." In STS, the problems of three little people are the world, and I suspect that one's enjoyment of the movie would depend on how deeply one buys in to their story either as the focus of attention or a compliment to the visual elements. Neither angle worked for me here.

What really irked me, though, ironically enough, was the use of music in this movie. [I say "ironically" because even though the story is based in the music industry, music is pretty much irrelevant to the plot. The main characters could have been art dealers or architects or lawyers and the story would have been exactly the same.] Malick & Co. made some very cool song choices, including one from Julianna Barwick and a track by Geoffrey Oryema from the New Age compilation Pure Moods, that started playing, then just as quickly stopped. After a while I felt like I was listening to an NPR documentary where they were only allowed to play the first 30 seconds of a song, lest they get stuck paying royalties.

I was looking forward to checking out Tree of Life at some point in my Netflix queue, but now after seeing one of his films all the way through...not so much. How would you compare those two movies? Was Malick more or less successful in certain areas in one or the other?

Kevin: Ouch! Well, I'm sorry that you hadn't seen The Tree of Life first, Clarence; Song To Song was definitely not a great introduction to this style of Malick cinema. And I completely understand if you felt nonplussed, as even many Malick fans seemed to be left wanting. Also, I will fully admit that I couldn't stomach a steady diet of these sorts of films -- maybe one every year or two just hits the spot for me? I'd still say you should check out ToL, but perhaps after you give this some space?

[For what it's worth, the reclusive Malick has emerged recently to say that he's done with this particular style, and plans to return to more traditional narratives in the future.]

It's interesting that you bring up the actual music used in the movie, since I barely noticed it? I was so focused on trying to stay abreast of the shifting plot threads that the background tunes fell through the cracks. The only time the music registered for me was during the appearance of Lykke Li as BV's (Ryan Gosling's) ex-girlfriend, as the two of them cover Bob Marley & The Wailers' "It Hurts To Be Alone." Of course, Ms. Li actually is a singer/songwriter in real life, and so she lent some authentic punch to the action here.

To be honest, I don't feel I can fairly compare STS to The Tree of Life at this point in time, since it's been six years since I've seen the latter. My general recollection is that the narrative components in ToL (particularly all the scenes of 1950s Texas, essentially the film's middle act) were much stronger, and that I had more emotional investment in the main characters? In fact, that whole Texas arc, which was presented through the eyes of a young boy, was a bit of a time machine -- I've never experienced anything quite so vivid in cinema. But really, Your Mileage May Vary when it comes to all this.

I'll close with a bit of a different tangent here. You've mentioned how the setting for the film didn't really need to be in the arena of music (and I agree), but do you have any favorite films that explicitly deal with the tensions and pressures involving popular music? This sub-genre is one that I seem to have skirted, from the biopics (The Doors, Straight Outta Compton, The Runaways) to the fictional (Mo' Better Blues, Rock Star, Rock of Ages).

Clarence: I think it's not an accident that many of the most popular music-focused films (School of Rock, Almost Famous) are fictional and tend to focus the story on the struggles of a single person rather than a group as a whole. There are only so many ways you can show sound checks or someone staring at a piece of paper while trying to write a lyric. Movies that depict the on-the-ground process of "making it" in the music industry, fictional or non-fictional, are pretty rare.

For me, 24 Hour Party People is the current standard against which I measure other movies of its type. I'm biased because it's focused around a couple of my all-time favorite bands (Joy Division and New Order), but I think the movie itself is a brilliant construction, or deconstruction, of a modern documentary. I like the fact that it is one of the most "honest" docs/recreations in that it doesn't even pretend to be objective about what it's relating to the audience. The main character Tony Wilson, played by Steve Coogan, puffs himself up, mis-remembers events, adds things in, leaves things out, etc. the way any normal person's memory works, only his is on film. What a fantastic movie.

Another one that comes to mind is This is Spinal Tap. Besides being one of the funniest movies ever made, the utter ridiculousness of the situations the band finds itself in is in reality not that much different from what musicians go through, from inter-group personal tension to playing empty gigs.

Films focused squarely on the music process are hard to do. Concert films generally don't do well, and straight biopics tend to cater to hardcore fans. In order to rope in larger audiences, I'm guessing it's probably necessary to amp up the comedy or weirdness of things like these two films do.

Going back to STS for a second, I want to mention that despite how it was a swing and a miss for me, I'm glad I saw it. It's so easy to get stuck in a zone of personal preferences, and it's even easier when you get older and have total command over your NetFlix account and TiVo box. It's important to have a look at different things even if they may not connect, especially where the arts are concerned. I feel like I want to see more of Malick and other directors that emphasize different aspects of film than what I'm used to, and I'm sure I will. I'll just need to make sure to check the critics' websites before I head to the theater!

[Did you see the movie? Want to add to the conversation? Leave a comment below!]

Next entry: @CHIRPRADIO (Week of April 3)