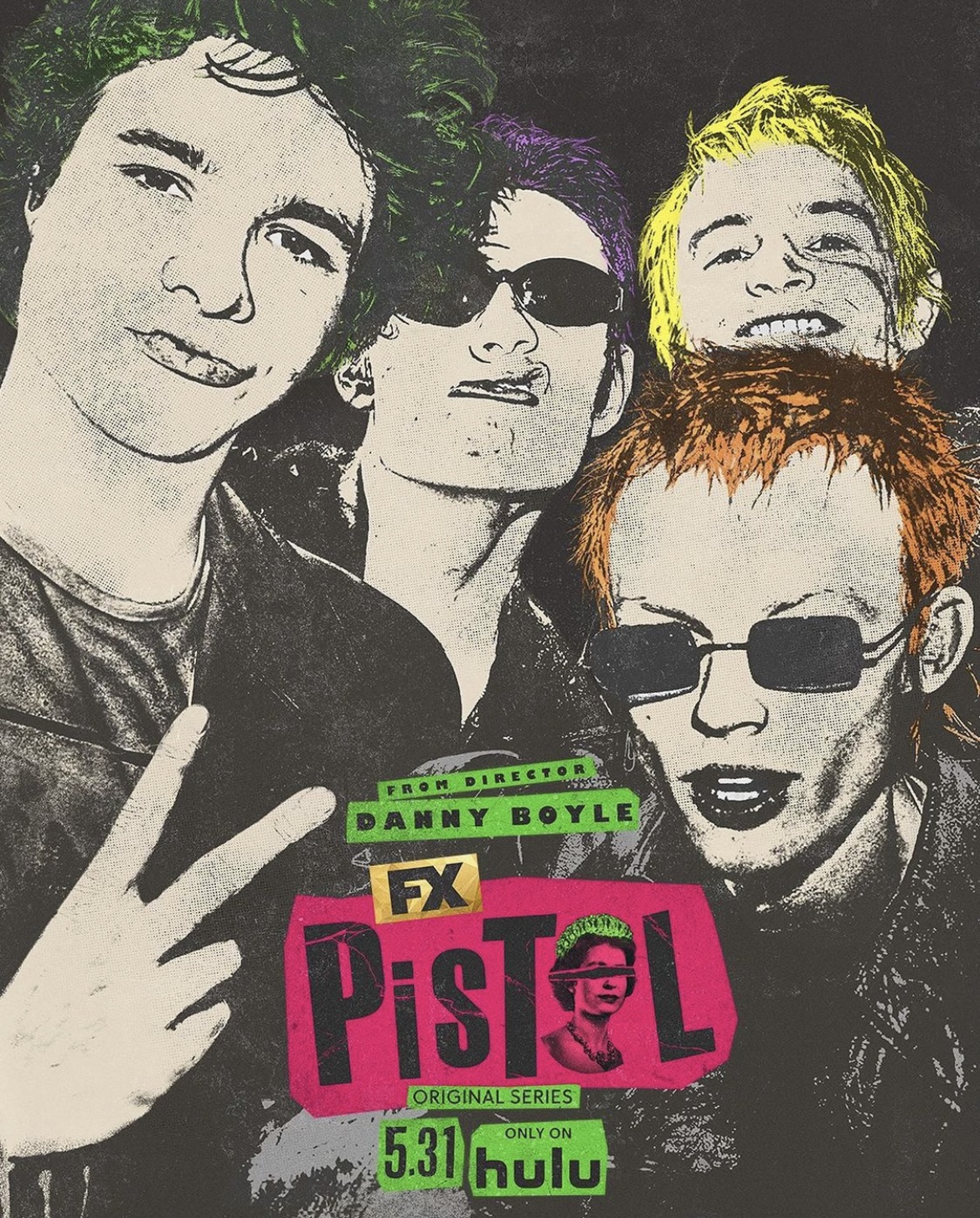 In only a few years, we’ll mark the 50th anniversary of the rise and fall of that Punk-est of Punk bands, The Sex Pistols. Assembled in London during the economic and social upheaval of the 1970s, the band didn’t invent Punk music, but they were at the right place at the right time to briefly become its biggest spectacle and make a brief but lasting impression on other musicians and music fans.

There are lots of accounts of the band’s history, both written and filmed. The latest to enter the collection is Pistol, a six-part miniseries directed by Danny Boyle, whose body of work includes Trainspotting, 28 Days Later, and Slumdog Millionaire.

The series is based on lead guitarist Steve Jones’ autobiography Lonely Boy: Tales from a Sex Pistol, and is told from his point of view. An illiterate petty thief dealing with a bunch of personal issues, Jones wanders into the London clothing shop SEX where he meets the owners Malcolm McLaren and Vivienne Westwood. McLaren agrees to manage Jones’ on-again-off-again music group, recruiting Johnny Rotten for vocals and appointing Jones lead guitar player despite the fact that Jones doesn’t know how to play guitar.

Jones also meets Chrissie Hynde (Sydney Chandler), a struggling American musician who would later find success with her own band The Pretenders. Over the course of the series, Hynde becomes Jones’ confidant/friend-with-benefits as he slowly learns a few guitar licks and leans in to his various addictions to alcohol, drugs, and shagging groupies.

The seeds of the band’s destruction are sown early on when McLaren has Jones fire Glen Matlock, the band’s bass player as well as their best musician and main songwriter. They replace him with Rotten’s pal Sid Vicious, who brings with him a great stage look and nothing else. Vicious would get involved with drug addict and general irritant Nancy Spungen, and the two would follow each other to the grave in short order.

The series spends a lot of time on the relationship between Jones and Hynde while also recreating the familiar big moments in the band’s short history, including their notorious appearance on Bill Grundy’s Today programme, the release of “God Save the Queen” during the Silver Jubilee celebration, and the U.S. tour of southern states that ultimately broke them up for good.

There are also a few harrowing vignettes included, such as flashbacks to the abuse Jones suffered from his father, and the story of a disturbed fan who inspired Rotten’s lyrics to the song “Bodies.”

For me, the best scenes are the moments where the band gets over ther posturing and bickering to make music, culminating in the recording of the brilliant Never Mind the Bollocks, Here’s the Sex Pistols.

Boyle’s directing style and talent for making squalor look electric and magical are on full display here. The cast is uniformly very good. There’s a hint of James Dean in Toby Wallace’s portrayal of Jones, the Young Misunderstood Outcast With Dreams. But there’s also an honest portrayal of Jone’s weaknesses and failures as he lets himself get led by the nose by McLaren without asking hard questions like where all the money from the band’s record contracts went.

Thomas Brodie-Sangster’s portrayal of McLaren is spot on as he spouts his pseudo-intellectual, pseudo-political nonsense to get the band to do his bidding. I especially liked Anson Boon’s turn as Johnny Rotten, revealing him as a genuinely talented performer whose off-putting personality is matched only by his ability to let fame go straight to his head.

However, each episode starts with the dreaded “inspired by true events” disclaimer, which means “the producers get to make sh*t up if it means a more interesting story.” And this being Jones’ story more than anyone’s else’s, I can’t shake the feeling that one might get a different view of things had another member of the band authorized their own mini-series.

If there is a Truth here, it’s in how The Sex Pistol’s fiery, in-your-face style makes for a great show, but can also be an exhausting and dangerous way to live. Their particular kind of Punk was probably not meant to last, anyway, as the People Who Run Things (management and media) were always far more interested in the money and the spectacle than the well-being of the people on stage.

While it’s a fast-paced and fun ride, other than the extent of Jones’ relationship with Hynde, I didn’t learn much more about the band through this series than what’s already out there. For a more succinct examination of the Sex Pistols phenomenon, check out Julien Temple’s The Filth and the Fury (1999), which is just as kinetic as Boyle’s work but puts things in a broader context. [Temple also directed the band’s first movie, The Great Rock 'n' Roll Swindle (1980).]

As the 1970s became the 1980s and Punk evolved into its Hardcore, Post-Punk, New Wave, and Alternative subcultures, it’s easy to see why the Sex Pistol’s story grew into legend. Like their music, it’s straightforward, loud, and a great example of Rock mythology.

Pistol is currenty streaming on Hulu