9:42pm Cate Le Bon Terror Of The Man from Me Oh My (The Control Group) Add to Collection

Entries on the topic of “Tom Verlaine” 1 results 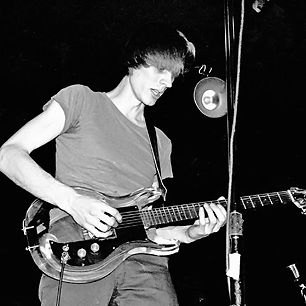 Today it’s the birthday of one of the most talented performers from the incredible CBGB’s scene of the ‘70s, Tom Verlaine. Born Thomas Miller, the future Television guitarist made friends with Richard Meyers a/k/a Richard Hell in boarding school. They ended up leaving school, moving to New York City, where Tom appropriated the last name of French poet Paul Verlaine. After forming The Neon Boys with Hell and Billy Ficca, they eventually added guitarist Richard Lloyd and became Television. While uninformed writers, to this day, talk about the CBGB’s scene as punk, it was really where ideas from the ‘60s were retooled into something contemporary, and Television combined some Velvet Underground, some precision sophisticated composition and an amazing instrumental attack into two classic albums (and their later reunion album was quite good). When Verlaine left, he carried on with a terrific solo career, with great art-pop songs, amazing guitar playing and odd but compelling lyrics. Let’s salute Tom by grabbing your iPod or MP3 player, hitting shuffle and sharing the first 10 songs that come up.