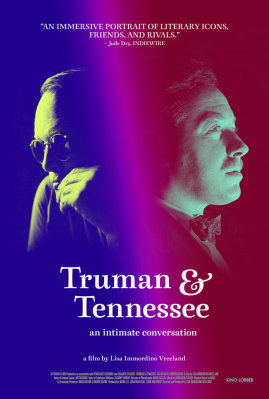 "If you can't be yourself, what's the point of being anything at all?"

You know it's a sign of progress when the sight of another corporate logo splashed in rainbow colors as recognition of Pride month causes one's eyes to roll. In what should be an appreciative acknowledgement of the LGBTQ+ movement, these symbolic messages of love and unity are often seen as a half-assed gimmick meant to make a profit.

As soon as July 1st rolls around, that message is quickly disregarded and it's back to business as usual. While that may be so, it's a huge step forward considering the hostile culture from sixty years ago.

Pride might not have been a thing back then, but Truman Capote and Tennessee Williams didn’t seem to need it. Two of America's greatest writers, they were both openly gay. One was a novelist who dabbled in plays, the other was a playwright who dabbled in novels. Both were raised in the ever-oppressive South where tensions ran high with their ever-repressive fathers. Their greatest works adapted into (somewhat great) films, with characters who were complex, desperate, and flawed. It was only natural that both men would develop a friendship, now documented in Truman and Tennessee: An Intimate Conversation.

Masterfully directed by Lisa Immordino Vreeland, this documentary chronicles the authors’ relationship through television interviews, film clips, and personal recollections about each other, provided by narrations from actors Jim Parsons (providing the soft-pitched twang of Capote) and Zachary Quinto (replicating the raspy southern drawl of Williams).

The documentary details their eerily parallel lives that occasionally crossed paths, particularly in the 1940s and '50s, when they traveled to the same European villas with their significant others. They even shared a mutual friend in Gore Vidal, another gay writer whose The City and the Pillar is considered one of the first American novels to openly deal with male homosexuality.

While their works would sometimes deal with gay themes, both men never shied away from detailing their own homosexual awareness. Refreshingly, they come off as less conflicted about their sexuality than they do regarding love, happiness, and self image.

The film seamlessly ties in their personal struggles of growing up in the south and having alcoholic parents--no doubt a cause of their superstitious tendencies and fears of abandonment. Both were fond of the drink themselves, using booze and pills to "quiet the rapid running machine" that fueled their creativity.

Of course one cannot produce a documentary on these two literary masters without touching upon their works. This documentary primarily showcases their most famous titles such as Breakfast at Tiffany's, The Glass Menagerie, In Cold Blood, and A Streetcar Named Desire, all of which were adapted into films.

These works are briefly discussed by both men, some of which affected them deeply. As quickly as these men rose to the top, they just as quickly spiraled downward. Their heavy use of drugs and alcohol ultimately ended their lives, and both men died within eighteen months of each other.

Truman and Tennessee: An Intimate Conversation is an intimate portrait of two incredible artists and should spark new conversations about their iconic works. In an era where LGBTQ+ awareness was nearly invisible, these two openly gay authors lived fearlessly while achieving acclaim and success.

Truman and Tennessee: An Intimate Conversation opens June 18th and is available in virtual cinemas nationwide through KinoMarquee.com