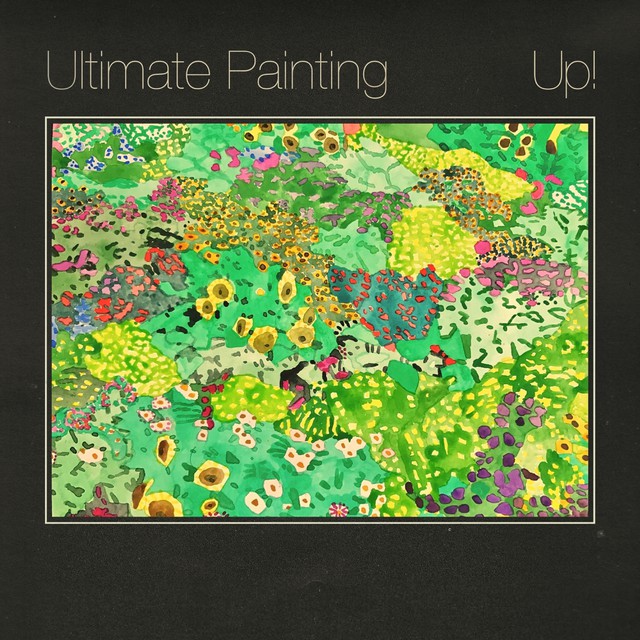 The two met while touring together with their previous bands in 2014, recording and releasing three records in three years on Chicago’s Trouble In Mind label: an eponymous debut in their first year, Green Lanes in 2015 and Dusk in 2016 which came in at number four on my top ten list that year.  They also recorded a Live At Third Man session for Jack White’s label in Nashville, not to mention a CHIRP Factory Session, which you can view here.

After three records in three years and steady touring, it was a fair question to wonder if Ultimate Painting might be headed for ultimate burnout, and following the break-up announcement, Pitchfork pointed out the prescience of a Jack Cooper statement included in a press release promoting UP!:  “We made the first three records so quickly, so no doubts had had the opportunity to creep in. It was all momentum.”

Doubts are apparent throughout UP!, as one could judge based on the song titles alone:  “Needles In My Eyes,” “Not Gonna Burn Myself Anymore,” “I Am Your Gun,” “Foul & Fair,” “Someone’s Out To Get You” and “Take Shelter” are just the first six tracks in the running order.  “I turn myself inside out / to give them something they can talk about / I’m just quiet sitting here / turn your back and I will disappear” that second song begins, and it concludes in part with the lines “They wanted much more than I could give them / I never had a chance . . . and the way they seem confused by the things I would say / as my mouth was busy moving, but I never said a word”-- as salient an ode to burnout as there ever was.”

Foul and fair days are these, dreadful hours and stranger things, people fighting through the swamp, they climb up to a stirring stomp” as “days rip apart at the seams” the duo sing on “Foul & Fair,” and there’s a film noir bleakness that permeates the narrative on “Someone’s Out To Get You” as Cooper and Hoare are ‘telling tales of jealousy as you fall asleep.”

Sleepiness is also a common marker in the songs of Ultimate Painting, whether singing about it, longing for it or occasionally almost inducing it, and this fourth outing brims with exhaustion.  Notably absent is the spark of creative exuberance of their earlier music, especially on laconic cuts like “My Procedure.”  The chorus of “Lying In Charles Street,” encourages listeners “Don’t waste your time, and forget about me, instead of hanging around,” and it could not only serve as a “Dear John” note of sorts but it’s also clearest here that whatever momentum Ultimate Painting once had has been spent.

If their last album Dusk (which I wrote at the time struck “exactly the right balance between sedation and stimulation”) was the duo’s pinnacle, UP! is ironically their lowest point, or perhaps their nadir. This act’s largest wellspring of inspiration is '60s alternative taste makers The Velvet Underground, and their music should be best assessed in comparison to fellow followers like Luna (and before that Galaxie 500) and The Clientele (and before that Earlimart (See also:  Elliott Smith)).  Cooper and Hoare plumb the smooth, mellow line of early to middle period Pink Floyd while simultaneously nursing the rhyming electric guitar technique of Pacific Northwest instrumentalists Pell Mell, who specialized in crafting soundtracks for films that were never made.

Cooper and Hoare may be running out of “new” ideas and the exuberance (and momentum) of their earlier records has diminished, but the twosome still possess an indelible gift for winning, winsome melodies and lovely turns of phrase, and thankfully they have never come across as jarringly derivative.  I’m forced to put “new” in quotation marks, for just as there is nothing new under the sun, Ultimate Painting aren’t painting a new picture with their bubbling guitar interplay and close harmonies.

But while the sounds they have committed to record here have all the same ingredients as their first three long players, there is a lightness and a brightness that’s missing.  It’s as though the dewy countrysides at sunrise and the rain-soaked streetlight lit mirrored pavements crafted by their countrymen The Clientele have had all the light drained out of them, and the net effect, despite the hopeful bookend of “Snake Pass” is overwhelmingly bleak.

Now that UP! will never be heard, barring a reconsideration, except perhaps on the CHIRP airwaves, what else can we expect from Jack Cooper and James Hoare?  Cooper released his first solo album, Sandgrown on Trouble In Mind last August, and although Veronica Falls years ago found death in the break-up graveyard, Hoare’s other band, The Proper Ornaments, continues to be a going concern, releasing Foxhole in January 2017 and touring as recently as last fall.

Next entry: Top Five Songs I Want Played at My Funeral