6:29pm Alicia Walter Prelude from I Am Alicia (Sooper) Add to Collection

And so it begins. Inauguration Day, an eagerly anticipated day filled with hope and promise, has been reduced to apocalyptic despair thanks to a turbulent election year that left many Americans feeling polarized and defeated. Today, Donald Trump will become the forty-fifth president of the United States, and there's nothing we can do about it.

Barely stepping foot in the Oval Office, Trump's choices for his administration have already baffled citizens and politicians alike, such as the recent confirmation hearing of Secretary of Education nominee Betsy DeVos. It doesn't look too promising elsewhere, but with a little luck and a whole lot of lip biting and finger crossing, our country will remain intact through November 2020, just enough time to change things around (unless of course we are treated to a triumphant impeachment trial in the oh-so-near future!). In the meantime, here's a top ten list of songs to help us get through the next four years:

Front woman Florence Welch describes this track as a "hangover cure," which makes it a perfect song to relieve the hangover of last year. Welch's vocals over a swelling, gothic organ and pounding drums certainly inspire one to shake the devil off their back, so let us all bury "that horse" (aka 2016) in the ground. As the song goes, "it's always darkest before the dawn..."

With numerous deaths from all genres and eras of the music world, 2016 (or now known as “The Year That Shall Not Be Named”) has been incredibly brutal. It seemed like not a week went by without the passing of someone great. While this year will not be looked back positively by this writer, some of the departed left behind new music, which only reinforces that the art of the artist often lives on long after their physical presence leaves us. Here are five of those artists’ swan songs...

The year that should not be named didn’t hold back any punches. David Bowie died after a secret battle with cancer on January 11, just two days after his 69th birthday, in which he offered us a gift with his 25th and final studio album, Blackstar. Fans and critics immediately listened for any hidden messages that the Starman may have snuck in, even checking the album’s packaging for meaning. “I know something is very wrong” has taken a brand new meaning as the year continued in, delivering one shock after another. (One shock that still stings was it’s exclusion from the Album of the Year shortlist at the Grammy Awards.)

Patti Smith is one of the most extraordinary icons in music history. In 1975, her debut album Horses introduced the world to an artist of raw talent and hypnotic energy who would serve as a major contributing component to the punk movement in New York City. Not easily placed within a specific genre, her mix of poetry and rock music defined her as an artist among few peers, yet would lay the groundwork for other aspiring musicians to follow.

Having recently performed at the Nobel Prize ceremony in honor of Bob Dylan, it's difficult to imagine that she's turning seventy on December 30th. A Chicago native, Patricia Lee Smith was born during a huge snowstorm on a day which she claims her father had to help a taxi driver navigate the treacherous conditions of Lake Shore Drive while her mother was in labor. To celebrate her seventieth year of life, Smith will be performing at the Riviera Theater with her band and grown children backing her eclectic set list. In honor of her birthday, here's a list of seven (one track per decade, naturally) essential tracks from Smith's extensive discography:

Patti's love song that "ignites the light in a single name" for husband Fred "Sonic" Smith. Patti isn't known for writing songs that are romantic in the literal sense, but it's hard to deny her yearning of the late MC5 guitarist on this track, oozing a sense of desperate longing between two lovers living miles apart. This longing would be the reason why she would leave New York City for Detroit, and considering how synonymous Smith is with the NYC punk scene, that love was incredibly strong.

By now, you have heard “Santa Baby” (either Eartha Kitt or Kylie Minogue, or heaven forbid, that version by Madonna) for the 300th time. You may be one of those unfortunate souls who have holiday songs piped in from speakers at the office or during your late-night shift at a chain store. These five songs are a break from listening to another lesser version of “Rockin’ Around the Christmas Tree” that’s playing on the all-holiday station right now. No one is ever going to come close to Brenda Lee in that department, and I wish artists would stop trying.

Special thanks to fellow CHIRP volunteers Craig Reptile, Bradley, and Jenna for your recommendations.

This energetic fusion of late-era disco, calypso, and early electronica was originally featured in a compilation titled A Christmas Record, released by New York-based EZ Records in 1981 that featured their most popular acts. (The album’s most famous track is “Christmas Wrapping” by The Waitresses.) The story behind the artist here is another gift in itself, for Darnell’s life could be another blog or a dozen. A native of the Bronx, Darnell paved the way for club culture and its music to reach the mainstream in the US before moving to the UK, fronting numerous bands and having many identities before giving up the lifestyle and settling down.

Eddie writesTop Five Reasons You Should Attend CHIRP’s Road to 107.1FM Party at Lagunitas This Monday 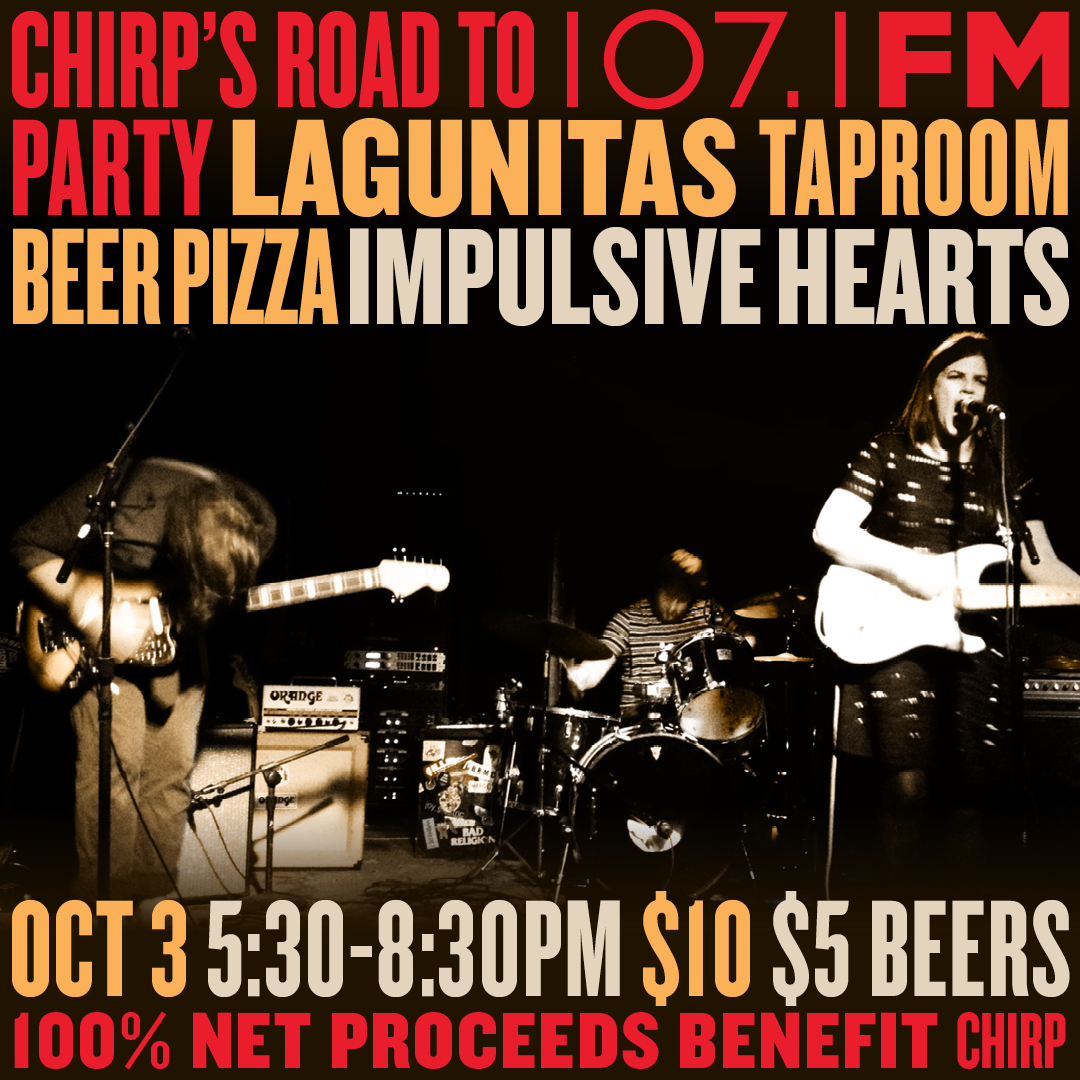 There are many reasons to avoid Mondays. It’s the beginning of the work week. It is cold, now that autumn has arrived. And sometimes, the weekend was so hectic there is no smooth transition into whatever you've got going on Mondays.

So going out on Monday evening is probably a bad idea. Except it isn’t. This Monday shindig with your friends at CHIRP is just want you need. At this event, we have...

Lagunitas has been a welcome addition to the Chicago craft beer scene since they opened their brewery in the West Side in 2014. For this occasion, Lagunitas drafts will be $5 each. If you plan accordingly, maybe it is possible to try some of their lesser known beers, like the Aunt Sally or the Born Yesterday pale ale. Plus, if Monday is a day free from work or other professional commitments, they have a tasting tour at 1pm and 3pm.

The animated (in name only) character Daria once said that there is "no moment in life that can’t be improved with pizza.” Included in your ticket (available here) is some fine pizza and appetizers from Bacci’s, the same folks who bring you the jumbo slices with a free pop. As a native South Sider who was within walking distance from a Bacci’s, there were fewer joys than grabbing a jumbo slice with a free pop for only a few bucks.

CHIRP Radio prides itself by playing local bands, and what better way to celebrate that than by having one of those bands perform live. In between rounds of Little Sumpin and trying not to stain your tie with pizza, Impulsive Hearts will perform some surf pop jams, which may just allow attendees to perform that summer is over and it will still be a cold, dark Monday outside.

4. Defeat the “Case of the Mondays"

Monday gets a bad rap. It’s the beginning of the work or school week. If you’re lucky, this day follows two wonderful days off from the workplace or class. Instead of going home to watch whatever the networks are calling “fall’s best new (insert genre)” or election coverage, why not spend the evening with CHIRP, and give yourself a pat on the back for...

CHIRP just raised over $23,000 in the latest pledge drive, a new record. Maybe you donated, in which case, thank you. If you didn’t, this would be a great way to financially support us. All the net proceeds benefit the station, and every dollar counts. Your ticket, which is only $10, could help pay for streaming fees, rent, printing out posters or flyers for future events, and allowing us to continue to provide high quality programming to thousands of people in our community.

Tickets are $10 and can be purchased here.